Buon appetito (or not): etiquette at the Italian table

It was a regular mealtime at home (of course) and something occurred that spun me into a frantic Google search and prompted further research. The culprit? My three year old.

That evening, my husband had served up his long-in-the-making risotto and as I ravenously prepared to attack the plate, I quickly uttered “Buon appetito”, only to have my son retort, “Mamma, non si dice ‘buon appetito!’” “What? You’re not supposed to say buon appetito?” An affirmative nod from my husband had me even more intrigued by this wisdom offered by the littlest member of our household. A quick quiz of family members had me pinpoint the source of this information: he had learned it at school. Attending scuola materna since September, I have seen my son return home many times with newly acquired information, but this was the first time he had returned with something that educated me as well. Upon investigation, in fact you are not supposed to wish someone a “happy” meal, and Giovanni della Casa is the person we have to thank (or not thank, I don’t know anymore).

The Italian word for etiquette and its meaning originates in a work titled Galateo overo de’ costumi by the Florentine writer Giovanni della Casa, published around 1558. Written as a Platonic dialogue between the author and his nephew Hannibal, the diplomat and churchman educates his younger relative about the rules to which a member of their wealthy social class ought to adhere. The specific tenets have naturally evolved with time, but the meaning of etiquette that emerged in this work has remained the same: respect for others and how to behave in order to ensure a harmonious society. Many still look to this guide to good manners and stress the still applicable value of his treatise.

I reached out to Samuele Briatore, author of Le regole delle buone maniere, impara il galateo e affascina tutti con la tua eleganza (Newton Compton Editori, 2019) and president of the Accademia Italiana Galateo (Italian Etiquette Academy). He helpfully pointed me in the direction of some key insight into the matter, highlighting the issue of setting. Among family and friends a casual buon appetito is sure to do no harm. Perhaps a little more controversial is for you to bellow it at a long table with dignitaries present, but given that its wish is the well-being and happiness of all present, is that not the very basics of good manners? According to galateo (etiquette), however, the table is a place for conversation and listening, which should be given greater weight than the food you are consuming. Therefore, strictly speaking, your appetite shouldn’t come into it. 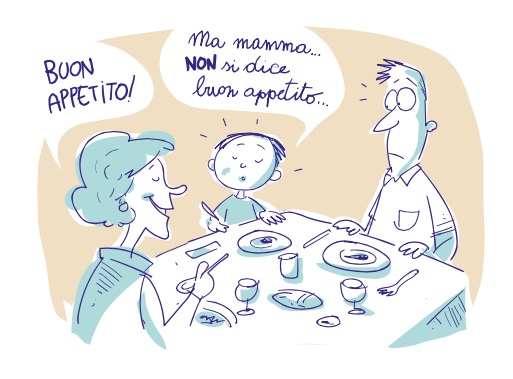 Briatore also refers to the other side of the debate, as argued by etiquette expert and countess Barbara Ronchi della Rocca, who declares there is a certain elegance in saying “buon appetito” before starting a meal. Another thesis is by Jack Goody, a British social anthropologist, who placed the origin of the term in the era of Charlemagne when it was used by court cooks to let guests understand how the Roman emperor wished that the food offered should be appreciated. Thus, Louis XVI ensured that banquets did not commence until the food was acknowledged. The French fashion spread leading to our more generally accepted use of the term today. Whatever side of the debate you fall on, ultimately, Briatore leaves us with a comforting consideration, “You need to know the rules to be able to break them”. So, cin cin.

Down the years, Italian friends have asked me “How do you say buon appetito in English?” I’ve never been able to come up with a satisfactory response. The lack of a similar expression in English possibly derives from our “food is fuel” mentality that has us throwing in the odd “Enjoy your meal”, but doesn’t quite have the same gusto as its Italian, French, or German equivalents, which promise an element of culinary fulfilment. This shortcoming often has us using some other parlance in our bid to communicate this wish. With mealtimes now more at the centre of our lives than ever, the good and honest wish that your food is enjoyable is, in my opinion, something worth sharing.