The sculpture of David by Michelangelo is globally recognized as one of the finest pieces of Renaissance art in existence. Once a metaphor for the invigorated and developing Florentine Republic, youthful, defiant, and brave, Il Gigante ‘The Giant’ as it was known by Renaissance contemporaries, has in modern 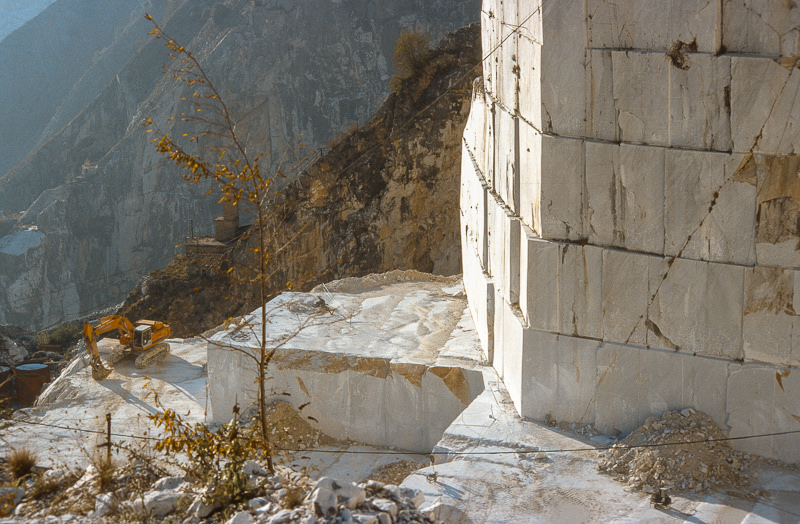 The sculpture of David by Michelangelo is globally recognized as one of the finest pieces of Renaissance art in existence. Once a metaphor for the invigorated and developing Florentine Republic, youthful, defiant, and brave, Il Gigante ‘The Giant’ as it was known by Renaissance contemporaries, has in modern times been reduced to an iconic tourist image for the cultured traveller, just another item struck off the ‘must do’ list. Unfortunately, not many of those travellers consider ‘Il Gigante’ beyond its famed artistic status.

Is a common belief that Michelangelo went to the mines at Carrara to hand-pick the pristine marble block from the quarry, but this is actually a fallacy. One often-overlooked fact is that Michelangelo came to this particular piece of stone after another sculptor had begun to carve it. The raw marble block then sat unfinished until Lorenzo di Medici commissioned the 29-year-old prodigy to complete the carving. One truth remains however, that the recently restored piece housed in the Academia Gallery is one of the finest examples of the purity and beauty of its chosen medium: fine white marble sourced in the hills around the nearby town of Carrara.

Carrara is situated about 100 km from Florence on the east coat of northern Tuscany and has been the source of this precious art material, a centre of sculptural production, and a competitive force in marble excavation and exportation for almost 2,500 years. The Apuan Alps surrounding the town contain the highest concentration of marble in the world and have been the source of material for the finest examples of sculpture, as well as an architectural wonder for some of the most creative hands and minds throughout the civilised world for centuries.

From at least the first century B.C., armies of marble workers have worked the quarries but so far have unearthed only a fraction of the billions of tonnes of stone embedded in the Apuan Alps. There are 40 kinds of marble, each one named for its particular colour and textural variance, from swirled gray Arabescato to zebra-striped Zebrino, all of which have been used with exquisite aesthetic and visual effect in ecclesiastical buildings and palazzi throughout Italy. The instantly recognisable stone adorns not only the facades of fine Romanesque churches in the homeland but has been used by equally appreciative architects and craftsmen in Asia and America; it once lined the lobby of the tragically devastated World Trade Center in New York.

Historically, the powerful alliance between, as well as the wealth of church and state drove the requirement for marble in the country and the Renaissance era placed a huge demand on the Carrara mines. Florentine figureheads, the Medici, were of course instrumental through their commissioning of palaces, churches and sculptures, all used to display the wealth and, by proxy, the power of the Florentine Republic. In addition Lorenzo di Medici was keen to demonstrate the aesthetic, political, and religious perspectives of the ‘free thinkers’ within Florentine society as well as the developing revolution and rebirth of the Republic, to the onlookers in the wider world. But there was also an important economic spin-off for local society; numerous tradesmen, labourers, artisans and their families lived from and depended upon the work generated by the industry, from the excavation of the stone at the beginning of the chain right down to the construction of the monumental buildings it adorned. This economic trend continued within the region and nowadays it has been calculated that there are 10,000 workers employed by the industry in mining and associated professions.

The industry has been revolutionized over the last 40 years. Dynamite has been replaced by diamond-wire cutting machines and other high-tech excavation equipment that ensure nothing goes to waste. The now ubiquitous Italian speckled pavements and tiles are a by-product of mining processes. Another by-product, marble sand, is used in cement, and even marble dust has found its niche in the production of glossy magazines and cosmetics.

Generations of families have been supported by the huge international marble trade; however, there has been a sharp downturn in demand for the stone in recent years resulting in one of the biggest local employers closing down. The impact on the region was immense as this company alone had been responsible for 60% of the industry’s output, which is extreme considering that the mines produce approximately 1.5 million tonnes per annum. Other global and economic factors such as the introduction of the Euro and the fall off in incoming business interest from Asian countries due to the SARS virus as well as instability in the Middle East have all taken their toll on exports. Added to this, countries such as India, China, and Turkey also mine marble. It is of lower quality, but combined with reduced overheads they are in a position to offer lower commodity prices, putting increased pressure on the Italian suppliers.

In their heyday, the mines were also the masters such as Canova, Michelangelo, and Donatello came to Carrara to choose the finest pieces for their commissions, and their 20th century counterparts like Henry Moore and Luciano Fabro were no different. Some of the work the local sculpture workshop SGF has produced for the international art market includes Pygmalion at Les Halles in Paris by Julio Silva and Continuitat II by Max Bill – weighing in at 320 tonnes, it is the heaviest sculpture in the world ever transported, and now resides at Deutschebank’s head office in Frankfurt.

Nowadays, though, artists have moved with the times and have been drawn by the development of new technologies away from the traditional materials to produce their work. In an attempt to redress this, the authorities of the Carrara art world have established a permanent art park at Pietrasanta filled with 3-dimensional works of wonder by commissioned contemporary artists in an effort to remind, entice, and engender demand for the stone again as a prized artistic medium. The ‘Scolpire all’ Aperto’ biennale is held in Carrara from July to October and is a great opportunity to see how the artistic hand and mind conceives and creates art from this solid material. But however famous the art created from Carrara marble becomes, the art produced cannot ensure its longterm future since the art market makes up only a fraction of this vast industry.

In Roman times, marble was the ultimate status symbol – no price was too high to pay for it, but what are the long-term prices paid by today’s local residents? There is some noise pollution and visible air pollution, but the dust from marble is not toxic. Ecological impact is also a concern so much so that the Government is considering awarding ‘Parco Nazionale ‘ status to the Alpi Apuane which would halt the speed of excavation.

So how in 2005 does an industry whose success is dictated by industrial developments, cheaper construction methods and materials, broader artistic concepts and new technologies, international trade competition, as well as a growing global conscience regarding the environmental impact of the mining industry, survive? Can the marble industry thrive, live up to, and perhaps as it would hope, supersede its existing legacy? With basic economic issues of supply and demand, ecological devastation, regional economics, and drastically changing artistic trends to deal with, what will be Carrara’s future?

Despite the indiscernible future for Carrara, Florence continues to profit from the global attraction to the great church and artworks built from its neighbours’ quarries: the Tuscany region was ranked in the Top Ten of world destinations by National Geographic’s Traveller Magazine in 2004. But Carrara is changing as it must, in line with the demands of the world, and tourism is forming part of those changes. It remains to be seen, however, if some day tourists will come to visit Michelangelo’s ‘giant’ legacy with its former status as striking metaphor reinstated, whether the statue of David will again be the icon of Carrara and the marble industry that spawned its creation, standing once again defiant in the face of economic adversity ready and willing to face its commercial opponent and remain steadfast to weather the changing climate to emerge, again, as a victorious competitor in the marble trade.

Roisin McGuigan has a Degree in History of Art and Fine Art. She is a professional artist and arts manager and works both in Ireland and Italy.