Top of the ‘Pops’ Coming to an Enoteca Near You…

Temperatures soared the last two weeks of May, but the weather wasn’t the only thing that was ‘hot.’ Hundreds of wine producers were busy showcasing their latest wares at various locations throughout Tuscany. So what was the verdict? What was hot and what was not? And

Temperatures soared the last two weeks of May, but the weather wasn’t the only thing that was ‘hot.’ Hundreds of wine producers were busy showcasing their latest wares at various locations throughout Tuscany. So what was the verdict? What was hot and what was not? And were there any good bargains to be found? Let’s take a retrospective journey through some of the highlights and pick out some of the gems that you can look out for, coming to an enoteca near you.

The action got under way at Castellina-in-Chianti with the Pentecost celebrations. Thirty-three local producers were on hand to tempt and tantalise us. Chianti Classico wines that impressed were the toasted, raspberry flavoured, 2001 ‘Colle Lungo’ from Campo Cerchi. A well-balanced and structured effort from San Fabiano Calcinaia, was the 2001 ‘Cellole,’ with nuances of wild berries. My top pick was the ‘Vigna Poggiale Riserva’ from Castellare di Castellina: a real smoky flavour with a truly elegant finish. A welcome surprise and a good-value buy was the 10 euro, 1999 riserva from Rencine, a small farm wine with a big personality.

The ‘Super Tuscans’ showed well too. One of my personal favourites was the 2000 ‘Roccato’ from Rocca della Macie, a symphony of dark fruits with a seemingly endless finish. My ‘new find’ farm was Cassafrassi: a family-run estate with quality products at competitive prices. Their ‘XXI century’ Super Tuscan at 15 euro is well worth a flutter.

The show moved swiftly on to the popular seaside resort of Viareggio and was set in the smart conference centre of the well-known, Principe di Piemonte Hotel. It was fascinating to see intrigued locals on the promenade, being drawn away from their beloved Chianti and into the world of Piedmont wines. As well as those of Barolo and Barbaresco, the lesser-known wines of Langhe and Roero were also being presented.

The stars of the show were definitely the Barbarescos, two in particular from Fontanabianca. Their 2001 ‘Sori Burdin’ was simply jaw-dropping; flavours of plum, aniseed, vanilla, spices, tobacco, and cocoa powder were all present and even though it is still young, it simply blows you away. The 2000 edition, while not as complex, is more ready to drink and therefore equally as pleasing.

Of the Roeros on offer, the ‘Roero Superiore’ 2001 from Malvira will have you converted. Rich, long, and harmonious, and at about 20 euro, you have no excuse not to try it. Slightly more expensive but just as good was the Roero ‘Roche D’Ampsej’ 2001 from Matteo Corregia. As far as the Barolos go, Elio Altare is one of the benchmark producers. He was at Viareggio with his new 2001 ‘Vigna Arborina,’ as well as the 2000 version. His prices, while expensive, are on a par with those of other Tuscan wines of the same quality. Very complex and grand, these wines are not for the faint-hearted.

Following hot on the heels of the Viareggio show was Alle Corte Del Vino in San Casciano. A weekend bathed in glorious sunshine saw hundreds of people of all nationalities; including aficionados, families, and those just out for a fun afternoon; gathered together, soaking up the atmosphere. Wine producers from the far-flung corners of Tuscany were represented; it’s incredible to think of the diversity in grapes and styles in this one region of Italy.

There were some decadent, luxurious wines on offer, such as the sublime, four French grape ‘Tenuta di Trinoro,’ which at a cool 250 euro is somewhat out of most people’s price range. Some fabulous Brunellos were presented, the 1999 ‘Poggio di Sotto,’ Castello Banfi’s 1999 ‘Poggio all’Oro’ and Col D’Orcia’s new 1998 ‘Poggio al Vento.’

It was good to see some estates lowering their prices, especially in respect of the horrendous harvest of 2002. Noticeably Tenuta Di Valgiano, with a still sexy, but half-price 2002 Super Tuscan.

In addition to the traditionally fantastic red wines, there were also a couple of incredible whites (which I will review next month) and some interesting dessert wines. La Poderina’s 2002 ‘Moscadello’ and Petreto’s 2002 ‘Pourriture Nobile’ were as good as ever, but this year a little overshadowed by a wonderful ‘Vendemmia Tardiva,’ by Castello di Pomino.

Ornellaia’s vertical ‘Masetto’ tasting was a once-in-a-lifetime experience and for anyone who has some serious money to part with, I can recommend the 2001 edition: an intense ruby-red colour, with notes of cherry, black pepper, cinnamon and chocolate, a perfect balance of tannins and alcohol, and this in only its first year of release.

Coming back down to earth, for those of us on a more realistic budget, two wines in the 30 euro range were the 2002 ‘Arnione’ from Campo alla Sughera, a rich, spicy, dark fruit bombshell that will seduce your taste buds, and, equally as indulgent, Castello del Terricio’s mouth wateringly juicy, 2001 ‘Tassinaia.’ My two bargain-buys of the show, both at 11 euro, were the 2003 ‘Rosso di Montalcino’ from the ever popular Castiglion del Bosco and the very interesting 2002 ‘I.G.T. ’ from Talenti, both youthful, fruity, and very drinkable.

Bringing May to a happy close was the Centovini D`Italia, held in the grounds of the Relais Certosa Hotel. The temperature was so high, that even the red wines were put on ice! Almost a microcosm of the wines to be found in Italy, you come away simply stunned at the sheer quality and diversity of Italian wines. This is a unique country where vines are cultivated in practically every region.

The spectrum of ‘Passito’ dessert wines here were amazing: from the light Moscatos, through Pantelleria, Vin Santo, Aleatico and Recioto, to the heavier Marsala. Pantelleria from Sicily is one of most pleasurable and you need go no further than the 2001 ‘Khamma’ from Salvatore Murana, a clean, fresh, dollop of pure nectar. For one of the most sensational smells you are ever going to have, the ‘Antico Gregori’ from Attilio Contini is the dessert wine to try; it will have you completely mesmerised. The real surprise of the weekend was a ten-year-old, aged Marsala from Bartoli. This wine will put Marsala back on the map. The finish was so long I could still taste it a week later!

Of course the main focus is always the red wine section, and with this much quality, it was hard to pick out only a few highlights. The 2002 edition of last year’s top pick was again outstanding. So good it even had the local sommeliers fighting for a taste! That was the poetically named Oasi Degli Angeli and their ‘Kurni’ from the Marche region: majestic, elegant, ripe fruit and a depth you could almost dive into. Up and coming wine-maker, Sertoli Salis from Lombardy was represented with their 2001 ‘Canua,’ jammy notes fused with bitter oranges and roasted coffee were the scents here. A reasonably priced ‘Amarone Del Valpolicella,’ was the typically blackberry and bitter-chocolate tasting ‘Pegrandi’ from Odino Vaona. If you’ re after a classy Brunello for under 30 euro, then the 1997 from Tenuta Di Sesta is a pretty good buy.

Finally two well-priced Piedmont reds at around the 10-euro mark, were the 2003 ‘Barbera D’Alba’ from Fontanabianca and the 2002 ‘Nebbiolo Langhe’ from Fiorenzo Nada.

So there we are, four great festivals, a homage to some of the great wines of Italy, and all on our doorstep. Time for you now to hit the beaches, with only four months to wait until September’s festivals begin.

The wines reviewed in this article are available at the following enotecas: 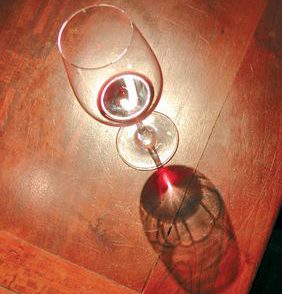 One of the dilemmas of choosing that perfect bottle of wine is being faced with an endless array of colourful, but confusing labels. The more expensive the bottle, the more difficult the decision.   How to weigh the myriad of choices? Enter the wine festivals. Here in Tuscany, they are