Most people who have spent some time in Florence are aware of the existence of the U.S. Consulate here. Some may have even used it for official reasons; for reporting lost passports, obtaining visas for entry into the U.S., for voting abroad in U.S. elections, etc. Or, some may have attended an anti-war rally, held often in recent years in front of the Consulate. And, possibly others may have only noticed the striking Palazzo Canevaro in which the Consulate is housed, with it’s peculiar trapezoidal shape and commanding position along the Arno River.

What most people might not know, however, is what this Consulate really represents, what purpose it serves, and what its mission of public service and diplomacy in Italy entails.

The current Consul General of Florence, William W. McIlhenny, has been serving here since 2002, and manages one of America’s older diplomatic posts (here since 1819)—one he terms a “grassroots” diplomatic mission that provides a broad range of services to Americans, Italians, and U.S. business.  He has overseen, during his tenure, the biggest expansion in the Consulate’s services in 20 years.  For McIlhenny, Consulates are “ where the rubber hits the road in foreign policy”. They are the ultimate observation points as U.S. policies and society intersect with foreign public opinion.  “A consulate provides some of the most direct contact the US government has with public opinion outside of national capitals,” he noted.

McIlhenny relishes his direct contact with the community, speaking with thousands of people every year in the course of hundreds of events meetings and other events throughout central Italy and the Republic of San Marino (where he serves as the U.S. diplomatic representative).  This contact with local governments, civil society, the press, and universities is “a way to help our embassy in Rome, and the U.S. government more broadly, understand what is on peoples’ minds here—and, just as importantly, to promote the most honest possible understanding of the U.S.  “

Mr. McIlhenny’s youthful and casual appearance is a bit deceptive, considering he already has quite an impressive career behind him. A former member of the National Security Council staff at the White House, he served as the U.S. representative (Permanent Observer) to the United Nations Educational, Scientific, and Cultural Organization (UNESCO) in Paris from 1995-99—in addition to other postings in Washington, Latin America, and Europe over the last 21 years.  By the time he arrived here in Florence, he was not a novice. And his experience and initiative have created a dynamic period for the Consulate in Florence.

One of the Consulate’s main missions is to represent U.S. interests at the level of local and regional government throughout Tuscany and Emilia Romagna.  McIlhenny speaks passionately of his role to convey accurate views of U.S. policies and society here, and has managed to create some innovative new services to facilitate his work.

At his urging, the State Department opened a new office for cultural and education affairs at the Consulate, dedicated to promote better understanding of the U.S.  by using, precisely, culture. In a much more inviting approach to informing Italians and Americans alike on U.S. policy, McIhenny has taken the stance that there is no better way to do this than by example. These days, the Consulate is continuously hosting various artists and prominent figures in American cultural and political life, brokering direct and relaxed contact with their Italian counterparts.

Though cultural diplomacy may have been missing from “local” U.S. foreign policy in recent years, it now seems to have taken a priority under McIlhenny. He believes culture is a common ground and can be used to foster better understanding. “Culture can be extraordinarily important in reminding people we communicate in common idioms.”

And, he adds,  cultural diplomacy is fun here in Florence because there is  such a high level of cultural awareness and interest.

Deane is one of many artists who have been invited to exhibit their works at the Consulate. McIhenny explains how Deane’s works, in particular, are a testament to the success of multicultural life in the U.S. According to the Consul General, the artist’s ability to combine elements from the many immigrant cultures that co-exist in his area of California, provides a striking example of a piece of art that can make a person contemplate some of the successes of American culture.

A painting such as this,  commented McIhenny, can have for some  a more profound effect than any long-winded speech on U.S. policies and affairs a Consul General would otherwise offer.

The Consulate is, obviously, not just about promoting U.S. policy in Italy. Another key mission is  to provide services and aid to U.S. citizens visiting and living in the Tuscany and Emilia-Romagna regions. In large part, this entails the more technical aspect of Consulate functions, managed on a day-to-day basis by Consul Steve Harper. Like McIhenny he is a career Foreign  Service Officer with wide experience at Embassies around the world, including service in  Guatemala, Bangladesh, Bolivia and Croatia.

In Tuscany, Emilia-Romagna, and the Republic of San Marino, which are the areas under the jurisdiction of the Consulate in Florence, well over  one million tourists pass through each year, 20,000 U.S. citizens are permanent residents, and there are about 5,000 students attending schools at any given time. Considering these numbers, one can imagine that this part of the Consulate is always bustling.

When asked exactly what services the Consulate offers to U.S. citizens, Mr. Harper immediately rattles off an extensive list of choices. He also happily procures a heavy load of documents offering more detailed information on the many functions of this section of the Consulate. Mr. Harper explains that the Consulate “offers a full range of services with the exception of pension assistance”. This means U.S. citizens can replace and renew passports, here.

They can register new U.S. citizens who are born, get assistance if injured or have been arrested, register to vote, and get some help with tax information. There are handouts that provide lists of lawyers and doctors who speak English, information on how to obtain an Italian driver’s license, how to obtain Italian citizenship, get a divorce, get reimbursed for IVA Tax, to name just a few. There is also a notary service available for those who would prefer to avoid complicated and expensive Italian notaries.

In 2003 the Consulate re-opened a non-immigrant visa office, serving citizens of Italy and other countries who require visas to travel to the U.S.  The Consulate has become the  main visa application point for 8 of Italy’s 20 regions, and this year will conduct approximately 10,000 individual visa interviews.

And, yes, there is yet another section of the Consulate, the Commercial Office, whose aim is to promote U.S. business in Italy.  Though the number one and number two private employers in Tuscany are American owned companies Nuovo Pignone General Electric and Eli Lilly, on a larger scale, the U.S. has an $18 billion trade deficit with Italy.

The Consulate’s Commercial office has, in the last few years, worked with hundreds of U.S. companies interested in doing business in Italy.  The Consulate’s services include arranging business  appointments in Italy for U.S. companies, organizing and hosting American businesses that come here to participate in Italian trade shows, and organizing Italian buyer delegations to travel to U.S. trade events.  This dynamic section is responsible for U.S. export successes that have netted millions in contracts for American companies in recent years. 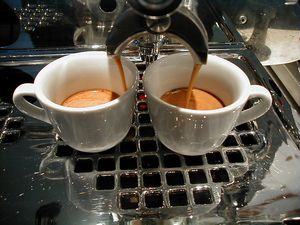