Florence is full of fashion schools: Polimoda, L’Accademia Italiana, Fashion Design Lab, Universita’ di Firenze (Architettura, progettazione Moda), to only name a few, and Lorenzo de Medici school’s fashion department has merged with the Atelier school to enlarge their fashion program. Thousands of students from all over the world come to Florence to study fashion every year–they come with the aspiration of becoming the next Christopher Bailey (Head designer of England’s largest luxury brand Burberry) or the next Zac Posen (considered to be the youngest designer with a successful women’s wear label). But where do they all go once they have that semi- recious certificate after three years of designing, pattern making, sewing, stitching and schmoozing?

Back in the day, the fashion demigods were Chanel, Gucci and Vuitton: simple folk with style and serious rags to riches’ stories. Gabrielle Chanel was an orphan, Guccio Gucci was a family rebel who was a maitre d’hotel at the Savoy in London, and Louis Vuitton was the son of a carpenter. Their work, their success, and their longevity as designers was based upon their formal and informal training as artists and artisans.

Today, the typical profi le of the world’s big designers is changing drastically. There are skilled designers who have talent and eye, but who were undoubtedly helped in their careers by celebrity parents, like Stella McCartney, or by simply inheriting a fashion house, like in the case of Donatella Versace and Angela Missoni. And some of the most talked about designers are not designers at all. They are musicians and actors, or singers that act, or actors that sing… and maybe they are celebrities just because they happen to be filthy rich. The Gwen Stefanis, Jennifer Lopezes, L’il Kims, Beyoncés, Eves, and Nikki Hiltons of the world are changing the way that the industry works and it is affecting one of Italy’s biggest industries.

Rapper, producer, and now “designer” Sean Puffy Combs’ clothing line Sean John was rated one of the fastest growing, highest grossing ready-to-wear companies last year. Where does that leave today’s trained designers? (I mean those designers without the fortune of being a superstar, a Hilton, or best friends with Madonna and Gwyneth Paltrow?)

Once they graduate from fashion school do they go to a Florentine ready-to-wear or high fashion brand like Patrizia Pepe or Roberto Cavalli only to do a three-monthlong unpaid internship, and then maybe be hired for 800 euros a month?

Do they go the bold route and start their own fashion line only to discover that production costs in Italy can be so high that the college loan you are still paying off seems like peanuts? Or do they fall into the offshore production route, where both quality and morals may be compromised? Few alternatives are left for the emerging designer. What seemed like a creative, high energy, glamour-fi lled occupation to the hopeful freshman-may easily deteriorate into a monotonousdesk-job of phone-calls for sourcing and production haggling.

As a designer, I like to think of fashion as art. An art than can, if you’re lucky, be a very lucrative business. But when quality is always compromised by cost, when up and coming designers are being paid less than the cost of living to design for some of the largest, and most admired luxury brands, and Puff Daddy receives the “Designer of the Year” awards, one begins to question what tomorrow’s fashiondesigners will need in order to make it in the industry.

It seems that new ideas, good taste, skill, experience, research, schooling and perseverance have less and less to do with the success of a designer. 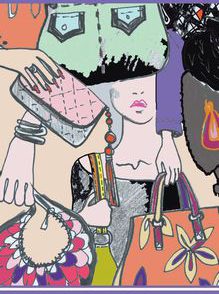 Never too fat to buy a bag 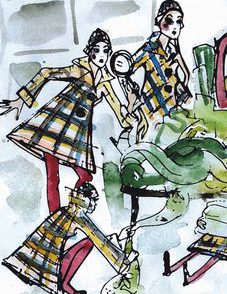 Have you ever complimented a friend on a killer hat or a stunning scarf only for them to reply, bragging, “Cute, huh? I got it at the market on Sunday for ONLY two euros!” Have you ever noticed that the most gorgeous garment gems are either Via Tornabuoni 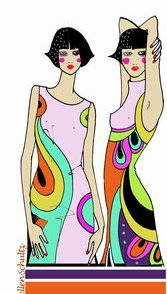 In the summer of 1949, a Marchese, a scion of an aristocratic Tuscan family, created his very first clothing line, all in black and white.  By the time his house of fashion was born in 1951, he’d found his pale turquoise, his sea green, his lemon yellow,