Looking for Mr Right? He lives on Via Ricasoli

Florence continues to be one of the most popular tourist destinations in Italy and Michelangelo’s David the masterpiece everyone wants to see. This is not new. The gigantic scale of the statue has been a source of wonder since Florentines first saw it in 1504. Indeed its size

Florence continues to be one of the most popular tourist destinations in Italy and Michelangelo’s David the masterpiece everyone wants to see. This is not new. The gigantic scale of the statue has been a source of wonder since Florentines first saw it in 1504. Indeed its size presented severe problems. How could they transport it from the Office of Works in Santa Maria del Fiore Duomo (Cathedral) to the Piazza della Signoria?  Giorgio Vasari (1511-1574), writer, artist, architect of the Uffizi Gallery and a friend of Michaelangelo’s (1475-1564) tells us how the problem was resolved. In his important book  Lives of the Artists (1550) he describes how Giuliano de Sangallo and his brother solved the problem. They  “constructed a very strong wooden framework and suspended the statue from it with ropes so that when it moved it would sway gently without being broken; then they drew it along by means of winches over planks laid on the ground, and put it in place.”  That place was directly outside the seat of government at the Palazzo Vecchio where it functioned as a symbol of good governance. It symbolised that those who ruled Florence should follow the example of David who had protected his people against the might of Goliath with valour, and governed them with  justice.

There are many interesting aspects to the history of the commissioning of the statue by Piero Soderini, the head of the Florentine Republic. Although only twenty-six years old Michelangelo chose to make it  from an eighteen-foot high block of marble that had been lying around the Office of Works for a number of years. Abandoned by the artist Simone da Fiesole (according to Vasari), the block was badly damaged, but Michelangelo rose to the challenge by producing a figure with the astonishingly accurate anatomical detail we see today. If we view the figure from the side, we can see however that the damaged block did not allow Michelangelo to complete the figure in the round. Yet it is a tour-de-force not only because of this obstacle but also for the idealisation of the head and the attitude of the figure, which recalls the art of the ancient Greeks. In addition to these qualities, Michelangelo chose the moment just before throwing the stone at Goliath in order to express the psychological tension involved in the unequal contest to the full (again, this is according to Vasari but not accepted by all historians).

Vasari also tells an amusing story about David’s nose. Soderini, standing directly beneath the work remarked that he thought that the nose was too thick. Michelangelo, to please him, climbed the scaffolding and pretended to work on the statue by making a chipping sound with his chisel and letting some marble dust fall by degrees to the ground below. After some time, he asked  Soderini what he thought of it now, and Soderini answered:“ Ah, that’s much better, now you’ve really brought it to life.” The story reveals that then, as now, our eyes and our perception of things can often be distorted by what we know, or think we know! After payment of four hundred crowns, David was put into the position where he is still seen today (the original is in the Academia Gallery), and Michelangelo’s reputation sealed for posterity.

A recent article in the International Herald Tribune (November 12-13th ‘05) makes interesting reading. It reports that Dr. Graziella Magherini, a Florentine psychiatrist, has been studying strong reactions to art for thirty years. She recently turned her attention to David comparing the response to it with five modern works displayed nearby. According to the director of the Galleria della Academia, it was the contemporary works rather than David that provoked “particularly violent and exaggerated reactions.” Should this surprise us? Probably not. The history of art is full of examples of art initially rejected by contemporary audiences as well as those, like David, which received an immediate positive response. Magherini’s research provokes many fascinating questions, and may ultimately provide some answers to the reasons for such diversity  throughout art’s history.

Brenda Moore-McCann is an art critic-historian with an interest in contemporay art living between Dublin and Tuscany. She is the author of The Chianti Sculpture Park (2004) and is currently writing a book on the artist Patrick Ireland (a.k.a. Brian O'Doherty) www.seeartmatters.com 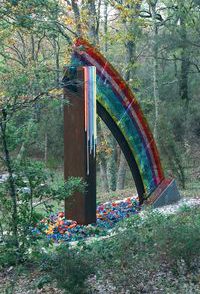 Historically, Tuscany is a region that has always been attractive to artists because of its rich cultural heritage, luminous light, and landscape. The sculpture gardens created during the 1980s and 1990s at the Villa Gori near Pistoia, the Giardino dei Tarrocchi at Pescia Fiorentina, or the Giardino di Spoerri at