Being known as the land of love, it is only logical that the patron saint of lovers comes from Italy. Strongly associated with the festival of Valentine’s Day, San Valentino lived in Rome when the Empire was under the reign of Emperor Claudius II. Legend has it that Claudius engaged Rome in several unpopular and bloody battles. To maintain a strong army, Claudius continuously needed to recruit soldiers. To his disappointment he found that most men were unwilling to join the army because of their strong attachment to their wives and families. To resolve the problem Claudius banned all marriages and engagements. The priest, Basilio Valentino secretly married couples and defied this unjustified and callous order of Claudius. When the Emperor discovered this defiance, Valentino was beaten, jailed and finally executed on February 14, about 270 AD. For his great service, Valentino was named a saint after his death. In 498 AD, when Pope Gelasius decided to end the pagan celebration of the feast of Luperculia, he declared that February 14 be celebrated as St. Valentine’s Day.

Originally, celebrated in honour of the Juno, Queen of the Roman Gods, February 14 has always been a lucky day for love. Juno was also regarded as the goddess of women and marriage, and her holiday was observed on the eve of the annual Roman fertility festival called the Feast of Lupercalia, which was dedicated to the gods of agriculture, Lupercus and Faunus along with Romulus and Remus – the legendary founders of Rome. During this festival, members of Lupercali, an order of the Roman priests, would gather in a sacred cave where Romulus and Remus are said to have been nurtured by the she-wolf or lupa. To mark the beginning of the festival, priests would sacrifice a goat for fertility and a dog for purification. Young boys would then slice the goats’ hide into strips and dip them in sacrificial blood. Later, the boys clad in animal skin (to impersonate male goats – the embodiment of sexuality) would run about the streets holding pieces of goatskin above their heads and gently slapping women with the animal hide. Women gladly received the slap, as they believed that the touch of the goatskin would render them fertile and bring easy child birth.

Another interesting custom of the feast of Luperculia was the pairing of young boys and girls who otherwise were strictly separated. On the eve of the festival, names of young Roman girls were written and placed in a big urn. Each young man would then draw a name from the urn and be paired with that girl for the duration of Lupercalia. Quite often the couple would fall in love and marry. Later, when Christianity spread through Rome, it was deemed un-Christian to chose a mate through a lottery system and the custom was outlawed. People felt that mates should be chosen by sight and not luck.

An early Valentine’s Day tradition in Italy was that betrothed couples announced their engagement on this day. Several days ahead of February 14, stores were decorated and filled with a huge variety of bonbons, including china baskets and cups filled with delectable candies and tied with ribbons. These were presented as gifts to Valentine. Another tradition was to make unmarried girls wake up before sunrise. People strongly believed that the first man an unmarried girl saw on Valentine’s Day would marry her within a year. Girls would wake up early and stand by their window to watch for a passing man.

Although the festival commemorates the martyrdom of a Christian saint, St. Valentine, the festival as it is today has little religious significance. The romantic festival of St. Valentines Day or La festa degli innamorati is celebrated in Italy with great enthusiasm. Just as in many other countries, the festival has been commercialised to a great extent. Days before the festival, shops, especially those selling gifts and cards, are decorated with Valentine’s Day symbols such as hearts, roses and cupids. There is a strong tradition of exchanging gifts like roses, perfume, jewellery, and baci Perugina – a small chocolate-covered hazelnut. Inside the wrapping is a strip of paper with a romantic quote in four languages. So, if you’re in a couple, enjoy a romantic dinner in one of the pizzerias or restaurants and soak up the romantic atmosphere of the day. And for those of you who aren’t, try getting up early and testing out some old traditions… they might just work! 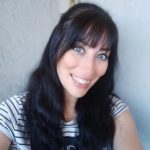 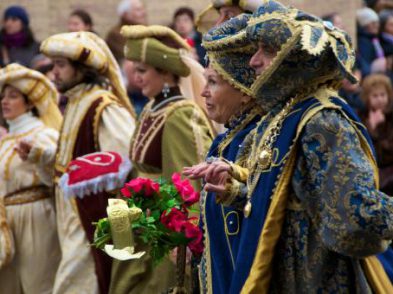 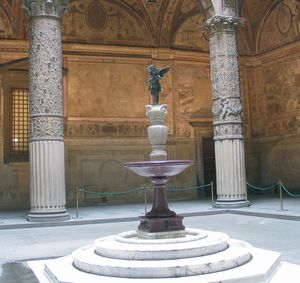