The unstoppable success in the  last two years of The da Vinci Code by Dan Brown has certainly renewed interest in Leonardo Da Vinci, already one of the most popular Italian Renaissance masters. In order to meet the public’s desire for more knowledge regarding Leonardo and his

renewed interest in Leonardo Da Vinci, already one of the most popular Italian Renaissance masters. In order to meet the public’s desire for more knowledge regarding Leonardo and his works the Province of Florence, along with APT, has included a number of exhibitions dedicated to him as a part of the larger Il Genio Fiorentino series.

The first of these exhibitions, Cerca Trova: i misteri della più grande opera di Leonardo da Vinci held at Palazzo Medici Riccardi from April 22 to May 2, featured a summary of the most recent scholarly research regarding Leonardo’s uncompleted Battle of Anghiari on the east wall of the Sala dei Cinquecento in Palazzo Vecchio. In 1503, he was commissioned by the new Florentine Republic to paint a battle scene to commemorate the city’s military victory over the Milanese duke Visconti.

Leonardo never finished the painting but drawings of it were made, and sections of his own preparatory sketches were copied. Thanks to the surviving copies of copies, perhaps most famously that of Peter Paul Reubens, scholars are able to reconstruct the intended scene. The composition featured a climactic moment in battle with horses rearing, contorted soldiers grimacing and struggling for victory. The intensity and originality of the composition essentially changed the concept of battle painting, extending its influence into the late Renaissance, Baroque and Napoleonic periods.

Leonardo actually began painting it sometime in 1505, but it is disputed exactly when. His contract stated that he was obligated to start by February but most believe that he began in the summer, probably in August. He started with the central section of the painting, using an experimental oil technique on the wall. He left Florence in 1506 for Milan and never returned to continue work on it. In 1512, the Medici, who had returned to power in Florence, commissioned Giorgio Vasari to paint over the wall. It is Vasari’s murals that decorate the walls today.

The experimental method used by Leonardo, Vasari’s over-painting and the remodeling of the Hall have presented obstacles in uncovering the secrets in Florence’s City Hall. The exhibition is dedicated to documenting the history of research into this particular painting. Multimedia presentations aimed to explain the findings of previous research attempts, from 1975 to 1977 and 2000 to 2002, as well as current investigations. With state of the art infrared technology scholars have been able to reconstruct more successfully the remaining  races of the painting, and these have been presented alongside photographs of Leonardo’s famed preparatory drawings and some of the most famous copies of his drawings.

Florence continues its search for the hidden side of Leonardo, with investigations honoring his most famous face. La Gioconda, known to the world as Mona Lisa, will be the protagonist on May 13 during the presentation Studi sull’immagine della Gioconda come autoritratto di Leonardo. The initiative, promoted by the Associazione Toscana – USA and sponsored by the Honorary Console of Perù Giorgio Fiorenza, includes several guest speakers. Alessandro Vezzosi, director of the Ideal Museum of Vinci will speak, along with Renzo Manetti, author of Beatrice and Monnalisa. Manetti will present an in-depth study which proposes the Monna Lisa as the painter’s celestial alterego which represents his spiritual guide towards Wisdom. American scholar Lillian Schwartz will present her research on the image of Monna Lisa as a self-portrait of the master himself. By means of a computerized analysis of la Gioconda and Leonardo’s self-portrait, Schwartz confirms their similar facial features. A video which outlines the different stages of the painting’s development will also be presented.

On May 17 in the Sala Est-Ovest of Palazzo Medici Riccardi courtroom junkies can enjoy Processo al Codice Da Vinci, Trail for the Da Vinci Code. This timely convention on the controversies surrounding Dan Brown’s novel will be presented just days prior to the release of the fi lm starring Tom Hanks. The national representative of Opus Dei, the Catholic association opposed to the fi lm’s message, will be one of the speakers. 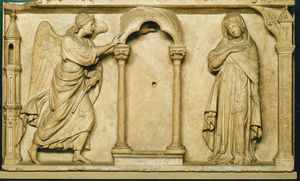 All over the city from banners, to billboards, to the back of your bus ticket you see the bas-relief sculpture of a graceful Gabriel who delivers his urgent message to the Virgin Mary and simultaneously announces a remarkable exhibition of Florence’s nearly-forgotten Renaissance master: Arnolfo di 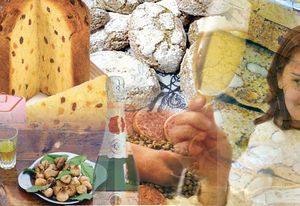 10 Vino Novello   You’ve probably seen wine shops and restaurants advertising the arrival of the newest wines and maybe wondered what the fuss is all about. Vino novello tends to be quite fruity and has a very distinct sweet flavour, but is worth trying and pairing with

10 The Price of Leisure   You’ve just finished your morning cappuccino at a quaint café near the Ponte Vecchio, you go to pay for it and are shocked to discover  that you’ve been charged 5 Euro. No, they’re not ripping you