Imagine that if the sci-fi horror film genre so popular in the 1950s ever returnsin which giant ants, spiders, or slugs evolve into huge devourers of the luckless humans who get in their waythe next movie will star the Italian zanzara. The title will be translated into English as

Imagine that if the sci-fi horror film genre so popular in the 1950s ever returnsin which giant ants, spiders, or slugs evolve into huge devourers of the luckless humans who get in their waythe next movie will star the Italian zanzara. The title will be translated into English as Mosquito! And of course, it will be made in Florence, where casting for millions of movie extras wont be a problem. Here, the mosquito as a tribe, as a culture, as a force to be reckoned with, is alive and well.Recently, heavy rains gave the mosquitoes new puddles, sloughs, and stagnant water in which to breed, and therefore a head start on sev-eral savage generations of voracious feeders. You may have noticed whats known as the tiger variety which is harder to see being lighter in color, and has in mind taking over the world, a campaign which is clearly well underway in Florence. The shelves of anti-zanzare preparations at local markets have increased in quantity along with each of their claims for added potency against this ubiquitous enemy. So, you are exposed nightly either to the flying marauders themselves through the necessarily open windows, or to the poisonous gases emitted by the preventatives designed to keep the bugs at bay. Of course, few Italians have realized that window screens might be a good idea. My landlord is not one of those Italians. Zanzare are opportunistic. They breed everywhere: in bathrooms, in the water left after you wash your hands in the lavatory, in the water that runs off but collects at the bottom of houseplant dishes, in the smallest drops anywhere. They even multiply below the first level of gravel where water, or at least moisture, allows their spawn to usher forth to threaten the cowering population. Some people are terribly allergic to zanzare bites. They get enormous welts that stay for long periods of time, and these people have no options other than using the insecticides, the most popular of which is called Vape (pronounced vah-pay) and sells like gelato on a hot day. Then its off to the farmacia to get a tube of Fargan to take the sting and itch away and help with healing. Mussolini managed to clear the swamps in Italy of the malarial mosquito, and that feat, along with making the trains run on time, will assure him a favorable place in history despite any other smudges on his reputation after he got into bed with Hitler. But why he didnt get rid of all the little buggers while he was at it, I have no idea. Nor do I know how he and his swamp people knew which zanzare were the malarial ones and which werent. Nowadays, there seems to be absolutely no civic interest in ridding the population of these pests. One suspects that the manufacturers of Vape may be steering any such efforts toward something less damaging to their profits, but who knows? Maybe a nationwide extermination just isnt possible.We dont seem to have many other bugs around here, apart from bees, which mind their own business. And except for the day that one hives queen decided to take a trip into downtown Florence, bringing with her an immense swarm of her kinfolk who nested temporarily on the statue of Neptune in the Piazza della Signoria, we are not troubled with insect invasions. Very few flies show up in Florence in the summer. But the zanzare are ever among us, often lingering long into the fall and appearing early in the spring long before you would expect them to turn up. One of my neighborsthe one who scrubs the marble floors in our hallway with a thoroughly noxious but highly effective solution whose chief smell is of chlorine bleachregularly fumigates her house with spray insecticides like Raid. She sprays the apartment in the morning, she tells me, and then goes shopping for two hours. She swears she never sees a single zanzara, though you have to wonder what its like to breathe at her place. The war goes on with both sides claiming victories. There is a new electronic anti-zanzare contraption that will probably be my next purchase. It uses no insecticides whatever and reputedly repels zanzare with death rays (or something to that effect). You see how close we are to a sci-fi film after all? As soon as I exhaust my costly supply of Vape, I think Ill buy that space-age zapper, watch the invaders fly in, get a blast from my new technology, and fly right back out again. Frankly, it sounds too fantastic to be true; still, it might make for a good B movie. 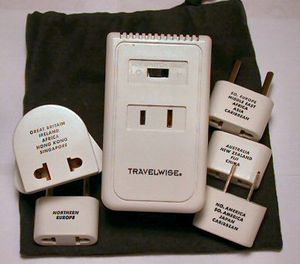 The joys of practical home maintenance

If you rent an apartment here, one of the things you will quickly discover is the Italian mode of home electricity.  You’ll probably want to plug in your computer right away or charge up your cell phone.  You’ll find that you need to buy