Theatre rocks the cradle of the Renaissance

As William Shakespeare once wrote, ‘All the world’s a stage, and all the men and women merely players’ (As You Like It, Act ii. Sc. 7). Florence has always been host to some of the most interesting and renowned casts of characters in the world, many

As William Shakespeare once wrote, ‘All the world’s a stage, and all the men and women merely players’ (As You Like It, Act ii. Sc. 7). Florence has always been host to some of the most interesting and renowned casts of characters in the world, many of whom were English language speakers. It’s time that English language theatre be available on a regular basis in Florence.

Florence International Theatre Company (FITC) springs from the vision of Artistic Directors Aaron Craig and Bari Hochwald, Florence residents who see the city as ripe for a professional resident theater company with active ties to the community.  Performing in English,  FITC plans to create an artistic institution which addresses all segments of Florentine society. Working with Italian theater artists as well as mother-tongue English speakers, FITC intends to create an approach to theater that will be recognized as unique to Florence. How?‘Slowly, with great patience and clear vision.  I think that’s how you build something new in Florence,’ says Hochwald.  Craig elaborates: ‘We see very clearly where this company can go.  We have great plans and believe we can realize them.  There are of course many challenges.  We intend to meet them as intelligently as we can.’ Hochwald adds, ‘and that means having patience.’Hochwald moved to Florence recently.  A professional actress with over 20 years of experience, she has worked with actors such as Sharon Stone and Josh Brolin on stage, screen and television, on shows including ‘C.S.I.’ and ‘Desperate Housewives,’ and has a de-voted fan base from her work on ‘Star Trek.’  She has appeared in over 100 regional theater productions throughout the US and been at the helm of two successful theater companies, in New York and Los Angeles.  She has many famous friends waiting to come and work with FITC.  ‘When the time is right,’ Hochwald says, ‘they’ll be here. And we’ll make great theater together for Florence.’Craig moved to Florence nine years ago.  He had recently graduated from acting school in California, and quickly moved to establish himself as an actor in Italy, as well.  People often recognize him for his first film role in Roberto Benigni’s Oscar-winning La Vita e’ Bella.  He most recently co-starred in the Italian film Orizzonte degli Eventi, directed by the up-and-coming Daniele Vicari and starring Valerio Mastrandrea, a well-known Italian actor. Craig also writes for theater and film, and last year opened an acting school in Florence. ‘Net Worth,’ a one-woman comedy-drama written by Hochwald and directed by Craig opens the season.  The show played to rave re-views at the Edinburgh Fringe Festival in Scotland in August 2005.  A play about exploring the values we attach to life, ‘Net Worth’ illustrates Hochwald’s hilarious and touching journey leading to a decision to move to Florence which makes it ‘a very appropriate first production for the company,’ says Craig.After a year of planning and preparation, FITC will open the season with four productions: ‘Net Worth,’ ‘Agnes of God,’ ‘The Eight: The Reindeer Monologues’ and ‘Lapis Blue Blood Red – the story of Artemesia Gentileschi.’ FITC will host community events, acting classes in English for teens and adults, and an outdoor summer reading series.‘The truth is we are either crazy or really smart,’ says Hochwald.  ‘The preparation for starting a theater company in Florence at the level Aaron and I envisioned was harder than anything I have ever done in my entire career.  And even though I have absolute faith in our vision, I don’t expect it to get any easier,’ she laughs. ‘That’s why we need volunteers!’ Craig adds.  ‘So please put that in the article!’‘We have done a lot of preparatory work and many people are excited about our plans,’ Craig says.  ‘Now we get to see this year if, in-deed, this is something that Florence really wants.’  Crazy or smart? Only time will tell. 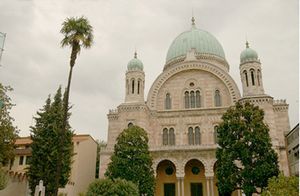 ‘Theatre is a powerful and unique art form because its essential nature is based on gathering people together to tell stories, hear them, see them and feel them. The stories ...