Venice—La Serenissima—is extra-ordinary and unique, one of the world’s great sites. Impossibly romantic, it has fascinated art-ists, writers and travellers for centuries. In our traffic-clogged and fast-moving age, its ‘other world-ness’ is still an endless source of

Venice—La Serenissima—is extra-ordinary and unique, one of the world’s great sites. Impossibly romantic, it has fascinated art-ists, writers and travellers for centuries. In our traffic-clogged and fast-moving age, its ‘other world-ness’ is still an endless source of wonder for visitors. It is home to an enormous treasure-trove of art, but even if you never step into a museum or church, days there can be filled by simply walking the atmospheric calle and campi. It is easy to get lost in Venice (even with a map), but just as easy to find yourself again; you are never far from a yellow sign indicating the route to either San Marco, Rialto, the Ferrovia or Piazzale Roma. So be bold; explore and let La Serenissima work its magic.

The best way to get a feel for this watery city is to take a trip the length of the Grand Canal. The route along Venice’s High Street not only offers views of some of the city’s most stunning palazzi, which cannot be seen from any other angle, but also gives an idea of how the city works. It is a major thoroughfare with all the varied traffic (private boats, taxis, water buses, ambulances, post office or police boats, grocery barges) you would expect in any busy urban centre.

Piazza San Marco and its accompanying tourist hoards should be avoided like the plague in high season, but in winter months it empties out and the pigeons outnumber the humans. Dominated by the exotic, glittering cathedral of St. Mark’s (whose mosaics glow in the evening light), the piazza was referred to as ‘Europe’s Drawing Room’ by Napoleon. This glorious square is the only one in Venice to actually be given the title ‘piazza.’ It is one of those places whose magic works in all weathers, be it shrouded in pearly-grey winter fog or filled with bright sunlight and crowds of colourful summer visitors. It makes a wonderful spot from which to sit and watch the world go by, so grab a window table at Florian’s, order something outrageously expensive to drink, and sit back to enjoy the show.

The three most visited sights in Venice are St. Mark’s itself, the pale pink wedding cake confection of the Doge’s Palace, and the Peggy Guggenheim Collection—but there’s plenty more besides. The Galleria dell’ Accademia is a one-stop-shop of Venetian painting, showcasing such masters as Bellini, Carpaccio, Titian, and Tintoretto. More of the city’s finest art is to be seen at the six scuole grandi; the most famous of these is the Scuola di San Rocco, where Tintoretto spent 23 years decorating the interior. But size doesn’t always count, and the prize for most charming must go to the Scuola di San Giorgio degli Schiavoni, a jewel box of delights where Vittore Carpaccio’s cycle of paintings fill the ground floor hall.

Then there are all those churches: huge, severe Santa Maria Gloriosa dei Frari housing the tombs of Titian and Monteverdi along with sculptures by Donatello and Bellini; Santa Maria Formosa, with its paintings by Palma ‘Il Vecchio’ and Vivarini; vast Santi Giovanni e Paolo where many Doges are buried; Palladio’s magnificent San Giorgio Maggiore; and Santa Maria della Salute, which guards the entrance to the Grand Canal.

However much sightseeing you do in Venice, be sure to set aside plenty of time for aimless wandering. Leave the clamouring crowds and the belching vaporetti as far behind as possible and head into the nether reaches of Castello and Cannaregio, where you will find quiet backwaters lined with small fishing boats and private craft, and real Venetians going about their daily lives. The residential area between the Arsenale and San Francesco della Vigna is almost devoid of tourists, while some wonderfully atmos-pheric hidden corners are to be found in north-western Cannaregio, an area built up around three long, parallel canals.

If you want to buy a mask, be sure to avoid the mass-produced junk and go for an artisan-made model. The most tradi-tional Venetian masks are simple, white faces, but many of those you see on sale these days are based on the principal commedia dell’arte characters. Check out the following shops; Ca’ Macana (Dorsoduro 3063), Papier Maché (Castello 5175) and Tragicomeda (San Polo 2800).

Island-hopping is the perfect foil to Venice’s urban crowding, but don’t limit yourself to the glass-making islands of Murano or Burano, with their picture-postcard, multi-coloured houses. Everybody goes there. Instead, grab the wherewithal for a delicious picnic lunch at the Rialto market and catch the vaporetto to Torcello, where the history of Venice began in the 5th century. Once home to 20,000 inhabitants, today it is a charming rural backwater with two remarkable churches and a resi-dent population of less than 20 souls. The large island of Sant’Erasmo is Venice’s market garden; a breath of fresh air after the city’s urban crowding, a walk through Sant’Erasmo’s lovely country landscapes will take you past farmhouses and fields of vines, artichokes and asparagus.

Where to StayVenice is probably the most expensive place in the whole of Italy in which to lay your head, but many hotels slash their prices off-season, when even some of the four and five-star places become almost affordable. My advice, however, is to go for somewhere small and personal; there are guesthouses and B&Bs to suit all budgets.

Eating OutFinding a good, honestly-priced meal in Venice is a major problem. As a general rule, avoid anywhere around the ma-jor tourist routes and run a mile from anywhere displaying their menu in several languages. You can eat well at the following without busting the bank: Ca’ d’OroCannaregio 3912, Ramo Ca’ d’Oro, 041 5285324 A delightful and atmospheric old ‘bacaro’ popular with tourists and locals alike. MistràGiudecca 212a, 041 5220743 Magical views over the lagoon are to be had from this out-of-the-way spot on the southern side of the Guidecca. RiobaCannaregio 2553, Fondamenta della Misericordia, 041 5244379.  Bare brick walls and plain wood tables provide a warm backdrop for the delicious fishy specialities at this new-style osteria.

Nicky Swallow has lived and worked in Florence for more than twenty years and is a regular contributor to guide books and magazines in both Britain and the US. She is an editor of Charming Small Hotel Guides: Tuscany & Umbria (pub. Duncan Petersen). The hotels, restaurants and other events included in 'An Insider's Tuscany' are a personal, independent selection on the part of the author and The Florentine receives no money from the establishments concerned.

In spite of an abundance of twinkling white lights, a fair showing of tasteful decorations and a token Mercato di Natale in Piazza Santa Croce, Florence is not  most people’s fantasy Christmas destination. Buy the presents here and move on. If you are after a good dose 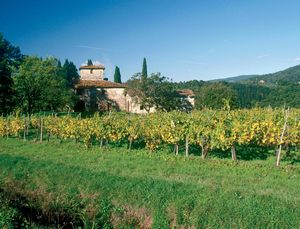 More than 7 million tourists pile into Florence each year, so it stands to reason that this small city suffers from serious overcrowding. Add severe traffic problems and the resulting levels of noise and pollution, and it’s not surprising that many visitors opt for accommodation that is situated 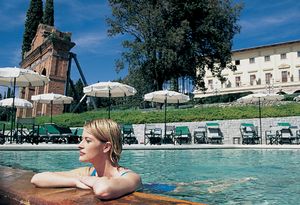 Tuscany is full of natural hot springs or ‘terme,’ many of which date from Roman or even Etruscan times and whose waters, originating from deep within the earth’s crust, have long been associated with curative properties. Each individual spring has a different make up in terms