The past in wax at ‘La Specola’

In 1771, the Wax Model Workshop was established in Florence by Abbot Felice Fontana, who became the museum’s first director. For more than a century, this workshop produced anatomical wax models which today constitute one of the most prestigious collections of its kind in the world. Supported by Grand Duke Peter Leopold of Lorraine, the workshop occupied the ground floor of Palazzo Torrigiani (adjacent to Palazzo Pitti).  In 1775, the Palazzo was officially inaugurated and opened to the public as the Royal and Imperial Museum of Physics and Natural History (the current ‘La Specola’ Zoology Museum).

Thus, the workshop began production even before the museum was established, and its products are still admired for their accuracy, originality and artistry. They were created for educational purposes, to teach anatomy through directly observing a cadaver. In fact, the collection was conceived as a three-dimensional treatise, in that it not only consisted of wax models but also included of a series of illustrations and related explanatory sheets. The preparation method began with dissection of the cadaver. The resulting anatomical pieces were used to create clay models. The plaster moulds obtained from the clay models were then filled with wax.

In almost a century of work, an enormous number of models were produced, mostly depicting human anatomy but also illustrating comparative anatomy and botany. Many of these models were commissioned by buyers both in Italy and abroad. More than 1,400 pieces are currently exhibited in the La Specola Museum, featured in 581 showcases located in 10 rooms.

Jane’s comments: ‘Specola’ means ‘observatory’. This collection is famous throughout the world for its incredible accuracy and the realism its details. Florence has a long tradition of artistic wax modeling, introduced by Ludovico Cigoli (1559–1613). It was not until the second half of the 18th century, however, that experts opened a school of ceroplastics (the art of modelling anatomical specimens in wax). Clemente Susini, for example, crafted models for medical students between 1775 and 1814 and remained active until 1893. The museum’s most important pieces are a group of waxes by Gaetano Zumbo (1656–1701) that have extraordinary artistic value. They carry both philosophical and religious meaning, besides being excellent anatomical models. These life-size pieces, which reproduce all the details of the human body, are sometimes very hard to look at, but always fascinating. 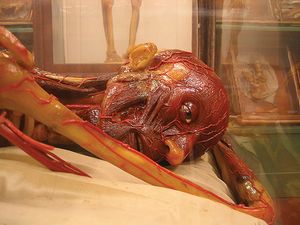 La Specola Via Romana 17 Entrance fee: 4 euro Hours: 9–1, Sun – Tues; 9–5 Saturday   The ‘La Specola’ Museum opened to the public in 1775, under the auspices of the Grand Duke Pietro Leopoldo of Lorraine. It was originally called the