Florence is home to over 1,200 street tabernacles, many of which date as far back as the 13th century. Adopted from the Roman tradition, the tabernacles served as small, altar-like temples and represented the religious faith of local citizens. During the 15th century, many Florentine guilds and powerful

Florence is home to over 1,200 street tabernacles, many of which date as far back as the 13th century. Adopted from the Roman tradition, the tabernacles served as small, altar-like temples and represented the religious faith of local citizens. During the 15th century, many Florentine guilds and powerful merchants commissioned renowned artists to create street tabernacles as a symbol of religious devotion and economic power.

City-wide renovation in the 19th century saw the destruction of many ancient Florentine churches, palaces and towers as urban planners strove to build new streets and piazzas. In addition, hundreds of masterpieces within local tabernacles were lost. However, the artistic and religious importance of tabernacles was re-confirmed after World War II, and since 1950, the city of Florence has made continuous efforts to restore or replace the images once inside them. In fact, several contemporary artists have recently been commissioned to produce new sacred works for vacant tabernacles.

One noteworthy example of contemporary sacred art can be found in Chiasso di Manetto, a small side street off of via delle Terme, near Ponte Vecchio. A striking bronze relief, Baptism of Christ, created by Italian-American artist Alan Pascuzzi, was placed in the 17th-century tabernacle last autumn. The work, cast in a foundry in Campi Bisenzio, was commissioned by the Templar Knights of Florence who, like patrons long ago, employed Pascuzzi to complete five original sacred works in bronze, fresco and terracotta for five tabernacles in the center of Florence.

These new works represent the ‘Mysteries of Light’ in the life of Christ: Baptism, the Marriage at Cana, Preaching of the Kingdom of God, the Transfiguration and the Last Supper. These five new mysteries where added to the Catholic Rosary introduced by Pope John Paul II in 2002. The baptismal theme was chosen for the 17th-century tabernacle in via delle Terme because of the unifying theme of water: the street’s name, ‘delle Terme’ means ‘baths’.

Pascuzzi’s original work represents a traditional subject in an entirely unique way-as the sacrament was performed in Christ’s time. ‘The entire composition shows John pulling Jesus up from the water; both of them are looking up to the dove of the Holy Spirit that descended upon them. The story of the Baptism is found in the Gospels of Mark, Luke and Matthew. Each mention the fact that Jesus was submerged completely when he was baptized. This corresponds with the term “baptism” which means “submersion” in Greek’, explains Pascuzzi. In most Florentine representations, such as Verrocchio’s Baptism in the Uffizi or those found in the Baptistry of San Giovanni, St. John the Baptist is seen standing on dry ground, pouring water over a praying Jesus who is either standing or partially submerged in the river Jordan. 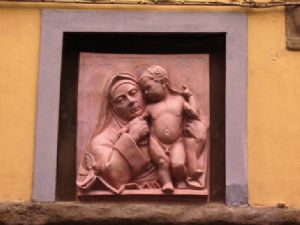 In continuing a centuries-old tradition, the Florentine bank, Credito Cooperativo Fiorentino, has sponsored a new sculpture of the Madonna and Child for a tabernacle on Via del Leone in San Frediano.  The terracotta Madonna and Child is the work of the Italian-American artist Dr. Alan Pascuzzi, who