Magic, witches, ghosts, vampires, werewolves, black cats, bats, spiders, skeletons, jack-o-lanterns, trick-or-treating and yes, the devil are all part of celebrating Halloween night.   In and around the town of Borgo a Mozzano (about 20 km from Lucca) on the evening of 31 October, one of

In and around the town of Borgo a Mozzano (about 20 km from Lucca) on
the evening of 31 October, one of the most famous Halloween celebrations in Italy
will take place between the Ponte della Maddalena (Bridge of Mary Magdalene),
known as the Ponte del Diavolo (Devil’s Bridge)
and the centre of town.

This Ponte del
Diavolo is one of two or three dozen ‘devil’s bridges’ found primarily in Europe, most of  which date back to medieval times.
This one is located on the River Serchio, along the SS12 dell’Abetone e del
Brennero from Lucca. It connects the two banks of the River Serchio near the town of Borgo a Mozzano in the province of Lucca and was once a very important river crossing on
the Via Francigena, an ancient road to Rome for those coming from France as well as an important route for medieval
pilgrimages.  It is a remarkable example of medieval engineering and it is
thought to have been commissioned by the Countess  Matilda di Canossa of Tuscany around 1080-1100. However, the bridge was
renovated around 1300 under the direction of Castruccio Castracani. Around
1500, it took on the name of Ponte della Maddalena from an oratory
dedicated to Mary Magdalene, whose statue stood at the foot of the bridge
on the eastern bank.

The unusual architecture of this medieval bridge with its asymmetric
arches is called ‘a donkey’s back’, but it is known as the Ponte del Diavolo
because of a popular legend that tells the story of a clever and respected
master builder who lived in a village on the banks of the River
Serchio. The villagers asked him to build a bridge to connect their
village with the one across the river. He set to work immediately, but he
soon realised that the construction was not progressing as quickly as he had
promised. Being a man of honour and wanting to keep his word, he became very
unhappy and quite desperate. He continued working very hard, day and night, to
finish the task within the time agreed upon in the contract, but the work proceeded
very slowly. The days flew by.

One evening,
while the master builder was sitting alone on the banks of the Serchio, looking
at the work that was still to be done and thinking of the shame he would suffer
for not having completed it on time, the devil appeared to him in the form of a
respectable businessman. He approached the master builder and said he
could finish the bridge in a single night-if the builder would promise him the
soul of the first one who crossed the bridge when it was completed. The
builder accepted the proposal.

The following day, the village had its beautiful bridge that can still
be seen today near Borgo a Mozzano. The townspeople were astonished and
delighted. When they went to congratulate the builder, he ordered them not
to cross the bridge before sunset. Then, worried about his deal with the devil,
he set off on his horse for Lucca to ask the bishop (who
became Saint Frediano), for advice.  This saintly man told him not to
worry: he should let a pig cross the bridge first. That is just what the
builder did. The devil, furious at having been tricked, threw himself into the
waters of the Serchio and has not been seen in that area since.

So don your
favourite Halloween costume (maybe a devil’s costume!) and jump in your car or
catch a bus to Borgo a Mozzano. You can tell scary ghost stories on your
way. Be sure to take some garlic with you just in case you meet a vampire.
Happy Halloween!

The Garfagnana area around Lucca has a long been
considered a ‘bewitched’ land filled with ghosts, goblins, witches, spirits and
other magical creatures. Locals are happy to regale visitors with the legends
and tales that have been passed down from generation to generation. Though
there are numerous Halloween festivals in the area, the largest celebration in Italy takes place near the
Ponte del Diavolo in Borgo a Mozzano. Activities for kids and families include
an interactive show and costume contest with ‘Jack the Pumpkin King’, fireworks
display over the Serchio River, live music and a Halloween
market. More daring adults can take part in conferences on ghosts, scary
walking tours, dinner in a haunted castle and more. The festival ends with a
Halloween ‘ritual’ that begins at 2am at an undisclosed
location . . . See www.halloweencelebration.it/index.htm for complete details.

By
car: take the A12 Firenze-Mare to the Lucca exit, then proceed on state road 12
in the direction of Modena for 23 km

Bus:
Lazzi and C.L.A.P. offer service to Borgo a Mozzano

Train:
Take a regional Florence-Lucca train, then take the Lucca-Aulla line to the
Borgo a Mozzano station

Dixie McIlwain is an American foreign language teacher who came to Florence on Florida State Universitys study programme many years ago. She is presently teaching English and writing a book on Anglo-American customs and traditions. After living in Japan, Germany, Singapore and seven U.S. states, she now resides in the countryside near Pontassieve with her vet husband and numerous animals. 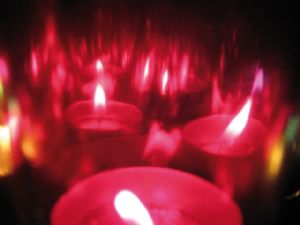 Italy has a rich calendar of holidays and festivals but one celebration that is relatively unknown today is the religious feast of Candelora on February 2, when the Catholic church celebrates the Presentazione del Signore (Presentation of Our Lord). Formerly called the Feast of the Purification of the Virgin Mary,