Let me tell
you about my first day in Florence-not because I want to share the details of my
trip, but to explain the overwhelming sense of cultural ambiguity that I, and a
surprising number of my fellow study abroad students at NYU, have been
wrestling with since we first touched down in beautiful Tuscany.

Grateful to be
away from the frenzy of Paris’ Charles De Gaulle airport, I was feeling the same
anticipation that I had when I first moved to New York. Not the relief-tinged excitement of a
flip-flopped tourist on a two-week break from the daily grind, but the excited
apprehension of a traveler. I was ready to start a life here in Italy. Ready, with all the illusion and naiveté of
someone who has never been outside of America, to become fully engaged
in the culture.

Which is why, after shuffling along in a daze through four hours of an
orientation program, I was more eager than ever to experience the city. You can
imagine my disappointment when I spent my first evening here with my new
suite-mates in one of Florence’s many Irish-themed pubs,
which was not at all bad, but not at all Italian, either.

In the following weeks, I met a good number of like-minded Americans who
were also harboring an unfulfilled interest in getting to know the ‘real Florence.’ In truth there was
something about the infamous ‘American clubs’ packed with study-abroad students
and offering watered-down drink specials payable in USD that I found
immediately repellent. But even the ‘authentic’ Italian restaurants and cafes
we frequented were overrun by tourists snapping pictures of their plates of
spaghetti, with servers who looked at me quizzically when I attempted to order
in Italian, then swiftly proceeded to tell me the daily specials in fluent
English.

Where are all the young Italians in Florence? Where do they go on a
Saturday night? If not for all the sweatshirts for sale around the Duomo, I
would not have known that the University of Florence existed. The fact that I
am in the midst of an entire community of Italian college students is almost
unfathomable, for I have yet to see any trace of it.

And so this is my goal-immersion. I have lived and studied here for over
a month, but I have not yet seen Florence, wherever and whatever
that may be. This city has a vibrant life and character of which I have only
caught brief glimpses. I want to break through the cultural barrier, discover Italy through the eyes of an
Italian, not the sunglasses of an American on vacation. 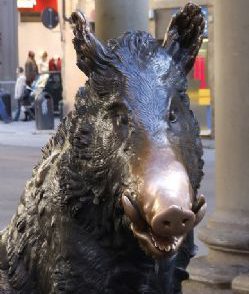