Have breasts, will travel.

There were the Grand Duke and Duchess with all their children, the youngest at his wet nurse's breast, happily suckling away.   A courtier, describing a ballet held at the Medici court to the Duchess of Mantua.  February 12, 1619   When Cosimo II and Maria Magdalena went

There were the Grand Duke and
Duchess with all their children, the youngest at his wet nurse’s breast,
happily suckling away.

A courtier, describing a ballet held at the
Medici court to the Duchess of Mantua.
February 12, 1619

When Cosimo II and Maria Magdalena went to this
performance, they brought the whole family: Ferdinando II, Giancarlo,
Francesco, Mattias, Margherita, Anna, Maria Cristina, and baby Leopoldo.
Visibly present with them-and, as this note describes, hard at work-was the wet
nurse. Throughout the Renaissance and after, the wet nurse played an important
role in the lives of upper-class families. Since the mid-fourteenth century
women who were lactating, frequently because their own newborn had recently
died, were hired to breastfeed the offspring of the well-to-do. The woman,
often a peasant, would either live under the same roof with the rest of the
family or take the baby to the country to live with her until the child was
weaned.

It was considered undignified for a woman of status to
breastfeed and was said to ruin her figure. More importantly, breastfeeding,
which often suppresses ovulation, also temporarily reduces the mother’s
fertility. Hence, families anxious to produce as many heirs as possible
discouraged women from nursing their own children. The fact that sexual
relations with a lactating woman were discouraged on the grounds that it could
harm the baby must have made many husbands’ desire to find a wet nurse all the
more urgent.

However, many noblewomen resisted giving over their
children to the care of others, for reasons of either emotional or physical
discomfort. In a letter written in January 1570, the Grand Duchess Giovanna
d’Austria, for instance, apologizes to the Duke of Urbino for not receiving his
envoy because she is in bed, fresh from childbirth and much afflicted with
milk. Nevertheless, despite the advice of medical authorities who noted
that children nursed by their own mothers were healthier and their infant
mortality rates lower, the custom continued through the modern age.

The demand for their services was high and wet
nurses were among the highest-paid domestic servants, as attested by the many
documents in the Medici archives noting the remuneration given them. For
instance, a secretary of Cosimo I in 1548 notes that 100 scudi are to be
allocated to the wet nurse Cassandra in order to buy a house. Cosimo’s
daughter-in-law, Giovanna d’Austria, in 1578 asks for a house to be given to Emilia
the wet nurse of Princess Anna…because this girl has nourished [the child] with
such care, diligence, and kindness.

Moreover, wet nurses enjoyed a position of special
honor within the household. Nowadays the idea of a woman baring her breasts for
money might cause some to equate her with a sex worker, but this was not the
case in the early modern world. Rather than carrying a social stigma, the work
of the wet nurse was highly respected. Since it was believed that not only
communicable diseases but also moral qualities could be transmitted through
breast milk, wet nurses had to have impeccable hygiene as well as morals.

Of course, transgressions occurred. The Medici
archives contain the case of a peeping Tom named Brigidone who in 1547 was
apprehended for spying on a wet nurse from the Duke’s dressing room, the
door of which was ajar. A curious document in the archives, dated 1584,
concerns the then nine-year-old Philip III of Spain, who has an abscess on
his thigh that worries his physicians greatly, all this because he contracted
the French disease from his wet nurse. How did the boy catch syphilis?
Could it truly have been from his wet nurse? And if so, how? Or was this an
excuse invented to cover up some sexual misdeed within the royal family?

Although we can only guess at the sexual
fantasies and peccadilloes of a former age, one thing is certain: wet nurses
once played a role in court and family life for which there is nothing
comparable today. In a man’s world, this was one job that could only be
performed by a woman and which gave her honorable opportunity for social
advancement.

Lisa Kaborycha has a PhD in history from the University of California, Berkeley, and is author of "A Short History of Renaissance Italy". A resident of Florence since 2007, she teaches courses at the University of New Haven in Prato and The British Institute in Florence. 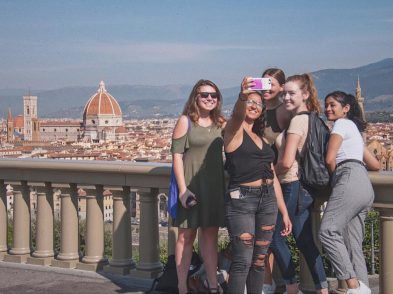 This past week, the study abroad experience of most American college students in Florence came to an abrupt end as, with tearful hugs for their homestay moms and waving arrivederci ... 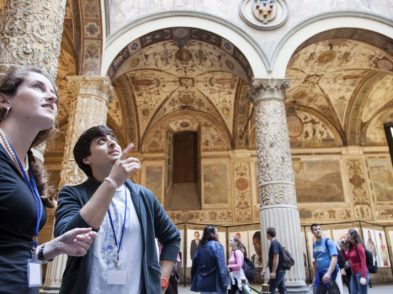 Studying in Florence: a classroom with a view 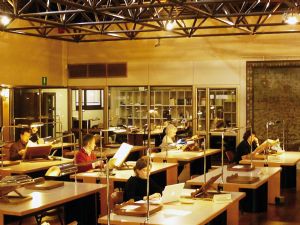 The irony of my job is not lost on me. As I go to work each day, I make my way on stony streets where it seems, at times, that you can still hear the Guelfs and Ghibellines hurling abuses, and sometimes even projectiles, at one another. From time to