Be good. Mind your parents. Appreciate the paradise that your home is. Or else you'll end up like the miserable souls in the netherworld. With Dante's Inferno as her guide, Virginia Jewiss has written a cautionary tale for children.   Although there's no missing the message of

Be good. Mind your parents. Appreciate the paradise that your home is. Or else you’ll end up like the miserable souls in the netherworld. With Dante’s Inferno as her guide, Virginia Jewiss has written a cautionary tale for children.

Although there’s no missing the message of Dante’s Journey: An Infernal Adventure, a recent release by Mandragora (available also in Italian), the adult who shares this book with a young reader might hope for Virgil to guide them both through the well-turned rhymed couplets and vivid illustrations, for it is not entirely clear what Cristiana Castenetto had in mind in suggesting the idea of the book: Should it be used to introduce one of the masterworks of Western literature or a facet of Christian (albeit medieval) theology?

To be sure, the book is expertly executed. Jewiss turns Dante’s moment of crisis into a neat and familiar frame: ‘young Dante,’ frustrated by his parents’ rules and tired of being scolded, decides, in the middle of the night to run away from home. He takes his doll, Virgil, and it’s a good thing he does because he’s soon lost in a dark wood. Instead of suggesting they turn around, the wise puppet lets him learn the indelible lesson of a visit to a very scary (and unnamed) place.

After young Dante and his ‘toy Virgil’ encounter a demon sentinel, who reluctantly lets the two pass despite the fact that the young man is living and admonishes him to ‘learn from the wicked trapped here below,’ his little guide shows him, in turn, a gluttonous three-headed pig-monster, legions of the greedy pushing huge boulders, the wrathful dissolving eternally into smoke, the violent stewing in a red-hot stream, the fraudulent transformed to tangles of snakelike creatures, and those who were just plain mean encased in ice. A glimpse at his reflection in the frozen depths clinches it: young Dante wants to go home to ‘be kind and learn to forgive.’

Jewiss, who teaches at the Yale Humanities Center in Rome, knows her Dante (she also translated Roberto Saviano’s Gomorrah into English) and effectively evokes both sin and damnation in the sprite verse. Aline Cantono di Ceva’s illustrations, with their references to Dorè (to such cunning details such as young Dante’s night cap and sprays of laurel leaves at the Virgil doll’s temples), bring both words and concepts to life.

As a child’s version of ‘old Dante’s’ work, Dante’s Journey will delight those adults in the know for its clever echoes in text and picture, from the warning etched to the mouth of the cave to the stars getting the ‘last word.’ It is disappointing, however, that no information about the work on which it is based-and the particular world view that it represents-appears anywhere in the volume. One might thus assume from the omission that Castenetto’s idea was less about literature and more about theology.

A Mandragora book always has a high production value, and this is no exception, from the quality of the colors to the quality of the poetry, and so it is an attractive book that someone might pick up simply on the appeal of its cover, ‘portrait’ format, and pint-sized presentation of a major work of literature. It is not, however, a book to be given casually to any child (however bright or bratty) or left to the babysitter to read to the kids. The youngster who loves monsters and suspense might not find young Dante’s journey a fun kind of scary. The child who will delight in words like ‘irascible’ and ‘befuddled’ and groove to the beat of the hendecasyllabic might brood about all that goes with ‘infernal.’ Nor is it clear for what age group the book is intended. The kid old enough, for example, to entertain a discussion about how bad behavior not only reverberates in one’s immediate world but may continue to punish in the next might not be lured to read a picture book. And so, a little guidance for the buyer or adult reader would have been in order, for the adult who introduces Dante’s Journey must be prepared to broach some tough subjects. 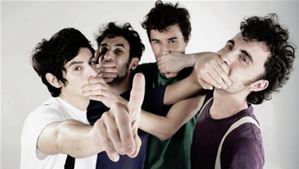 With two guitars (electric and acoustic), a double bass, great voices and an uncanny ability to nail the sounds of hit makers from the 1950s and 1960s, Alexander Woodbury, Valerio Fanciano and Cosimo Ravenni began playing in pubs in Florence as the Street Clerks in early 2007...   *GET MORE 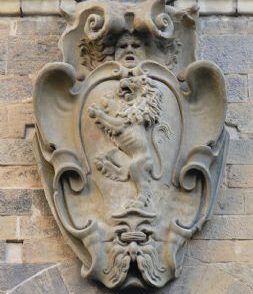 From CANTINA to LOGGIA

It's easy to miss many of Florence's most delightful treasures. Walk along via Porta Rossa, for example, looking in the shop windows, and the facade of the Palazzo Davanzati, built around 1450 for a family of wool merchants, will blend into the city's familiar background of dark

Around the world in 90 days

From October 2, 2009 to January 2, 2010, an international group of 100 people will experience four seasons and the extremes of the planet's climates and terrains as they zig-zag across six continents, carrying a message of peace and nonviolence. With them every step of the way, in