When the eight of us gathered in Florence in early September, 2008, we were full of dreams about a month of travel around Europe from our base in Italy. However, we found our days were much busier than anticipated. Preparing for a year at the Università degli Studi di Firenze, we needed to become proficient in Italian-fast. If we had any hope of keeping up with our lessons, much less pass the final exams, we had to spend six very intense hours at language school every day. By the end of the month, although I knew I was nowhere near being ready, I started classes at the university.

The first day of class, I walked into the ‘aula,’ the classroom, knowing it would be difficult, but ready to write down whatever I could grasp. If only there were seats: more than 100 students were crowded into a medium-sized classroom-the unlucky ones were against the wall, hugging their knees to their chests. I wondered how I was going to understand the professor while squeezed into a nonexistent space. I squeaked out ‘Posso?’ to a girl who first glanced at her friend before giving me the go-ahead. As I attempted to find a comfortable writing position on the floor, I tried to avoid all of the eyes that seemed to be on me. She’s American! She’s American!

Taking out my notebook. I dated my page the Italian way: the day before the month. Now at least if anyone were to look at my notebook, they’d know I speak Italian-or sort of. But once the professor walked into the class, I knew I was doomed. The professor began his lesson with a smile-just as he would every class that semester-and proceeded to rattle on, nonstop, for the next two hours, seemingly unconcerned by constant comings and goings of students, the whispered conversations, or even the cell phone conversation three seats in front of me. I couldn’t tell you a single word he said that day; I couldn’t even tell if he was finishing his sentences.

My face must have given it all away because about five minutes into the lesson, a girl nearby leaned into me and said, ‘Capisci?’ (‘Do you understand?’) I returned her smile and softly said, ‘Un po’. In chatting with Flaviana, who is Brazilian, I began to learn about the university system: Italian students don’t usually attend class. This became increasingly evident in the following weeks: the classroom seemed to grow larger as the number of students in it diminished. Italian students typically study at home. When exam time rolls around, they go in without the professor’s input. How do they do on their exams? Flaviana explained that typical grades range from 27 to 30. ‘Così basso?’ (‘That low?’), I asked, surprised. Laughing, she explained that 30 is the highest grade. If they score lower than a 25, the teacher usually requires them to come back and try again.

Not until the end of the semester would I fully understand. Sitting with the other students, waiting my turn, I listened to the professor’s rapid-fire directions. The exam is very difficult, he said, and many students don’t pass on the first try. But not to worry: we can always repeat the course. At this, I turned to my friend Matt and mouthed, ‘No way!’ Then I noticed that the Italian students were sighing in relief and smiling. They seemed to prefer this option. Incredibile! Never in my wildest dreams would I want to retake a university class.

However, I have to wonder if ‘laid back’ is the way to go. For whether it’s the 15-20 minute espresso break at 11am or that the scheduled start-time of 9am means 9:15 or even 9:20, it seems that Italian university students know how to take care of themselves and relax. Should I follow their lead? Is this the way to immerse myself in Italian culture?

I’ll let you know as soon as I take my next exam. 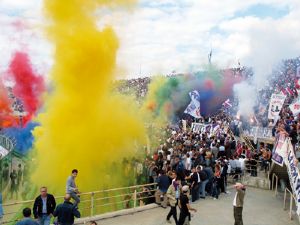 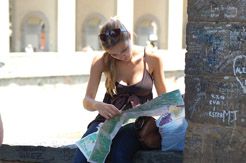