A quest for the truth

I don't remember exactly when my Italian mother-in-law told me that her grandfather was murdered. I've known my husband's mother for almost 30 years, so it must have been during the early part of my romance with her Florentine son that she mentioned that her

I don’t remember exactly when my Italian mother-in-law told me that her grandfather was murdered. I’ve known my husband’s mother for almost 30 years, so it must have been during the early part of my romance with her Florentine son that she mentioned that her grandfather had been beaten to death in the family barn. What I do remember however, was how surprised I was by her casual attitude towards the killing. With a shrug and a ‘boh!’ (Italian for ‘who knows?’), she told me that the murder had never been reported to the police, had never been investigated and that no one had any idea who would kill her grandfather or why.

‘Maybe it was the mafia?’ I suggested in my naivety, not sure whether the Neapolitan camorra had a treacherous arm that stretched as far as Tuscany. ‘Or,’ I tried again, ‘maybe he owed someone money?’ All my mother-in-law would say was, ‘No, no, you don’t understand. It happened 100 years ago, when life was cheap in Tuscany. We were poor farmers. No one could have cared less about my grandfather.’ Although I don’t recall when I was told all of this, I’ll never forget how surprised I was that my Italian husband’s family could so nonchalantly dismiss their grandpa Artemio’s murder as ‘that was just the way things were.’

Following a long-distance relationship that see-sawed my boyfriend and me between Sydney and Florence for 18 years, we finally married, and I have been living in Tuscany for 12 years. But instead of accepting grandpa Artemio’s killing as a closed murder case, I found that the passage of time only served to increase my interest in my mother-in-law’s revelation. The circumstances surrounding the killing did not make sense. It was so strange to me that someone could be attacked in his own barn yet no questions were ever asked or answered. How soul-destroying for Grandma Bruna to battle such a harsh life alone, with seven children, and without her husband. I couldn’t let the mystery go. So, with her permission, I began to investigate the killing myself.

First, I had to learn about the old Tuscan farming community. According to the Communità Montana del Casentino, up to 70 percent of rural Tuscany was farmed under the mezzadria farming system when Grandpa Artemio was killed in 1907. Whole families worked as sharecroppers, paying half of everything they produced to their land’s owners. Once the owners had been paid, the food left over for the mezzadro (the farmer), was barely sufficient to avoid starvation.

And so the first pieces of the puzzle, and the focus of my book, Death in the Mountains, the True Story of a Tuscan Murder began to fall together. Once I realised how few people really grasped the level of poverty in Tuscany only one or two generations ago, I felt compelled to tell the farmers’ stories. The desire to recreate my husband’s family, so as to help people see what country life was like, consumed me for another reason, as well. There is enormous international focus on Tuscany and its glamorous villas that are renovated and turned into luxury holiday destinations. Buying and re-building the Tuscan villa has been romanticized in so many novels and magazines. But how many foreigners truly understand what went on behind those solid, rustic walls before they were restored? My husband’s family, like hundreds of thousands of other Italian families, was forced to abandon their country home to live in the city, their only chance to make a decent living. Knowing this, I felt a strong need to honour all those forgotten rural men, women and children. The Tuscan villa, or casa colonica, is what it is today because of them. Yet in contemporary English literature set in Italy, their stories are rarely mentioned.

Interestingly, while writing the book, it was not Grandpa Artemio who so captured my imagination. It was Grandma Bruna. It was through her that I was really able to give my readers the feeling of Tuscany 100 years ago. Grandma Bruna had a strong spirit and almost all the family stories that were passed down concerned her, not Artemio. She bound her babies from armpits to ankles until they were 18 months old to ‘straighten their legs’ and because it was the only childcare (apart from the rabbit’s cage) that she could afford. The Tuscans called these babies salamini because they looked like little salamis, all wrapped and swaddled. It was Grandma Bruna who on Sundays rose at dawn to attend a 6am mass said especially for the housewives so that she could go back home and spruce up her family for a later service, which she missed because she had to stay behind to cook the Sunday lunch.

Grandma Bruna was a complex mix of superstition and religious faith, a woman who cared fiercely for her children and the land and animals that sustained them. She gave me an insight into why the traditional Italian woman of today appears submissive to her husband, yet is not at all malleable.

In an emotional sense, writing Death in the Mountains gave me more than I had bargained for. The killing of Grandpa Artemio was a big event in the family village, which is located in Casentino, the northeastern, mountainous area of Tuscany, north of Arezzo and east of Florence. When I talked to the old people, cousins and elderly farmer folk who still live nearby, they recalled with great clarity what their past relatives had said about the famous murder of Artemio Bruni. In 1907, almost everyone who worked the land was illiterate, so there was a lot of gossip, but no letters or journals to refer to. It was only by talking with people that I could figure out what happened in the months leading up to Grandpa Artemio’s murder.

I spent three years chatting with locals, and then reinventing the characters of Artemio and Bruna from the anecdotes and memories of those around me. Subsequently, I became so entranced by this long-ago family that I almost forgot my main aim was to discover the murderer. Who would have thought, after years of trying to imagine their thoughts and reactions, that I would have grown to love them both so much? Perhaps that’s what all writers feel for their characters as their novel takes shape-a growing tenderness as you nurture your protagonists from imagination to the page.

Still, nothing prepared me for the genuine grief I felt when one day fate led me to the one cousin who held the key. He told me who killed Grandpa Artemio and why. It was a heart-wrenching moment, discovering the assassin’s identity. My mother-in-law was with me and I felt her sadness keenly. Nonetheless, she felt that it was a story that should be told. But she insisted that her real name never be used. She said it was important not to upset the family of the man who killed her grandfather.

You see, they still live nearby and, till this day, they have no idea that their grandfather murdered Grandpa Artemio.

On April 13, at 6pm, at the Paperback Exchange (via delle Oche 4R, Florence; tel. 055/293460), Lisa Clifford will be talking about four years of research and intrigue behind Death in the Mountains, including her findings about the forgotten lives of Tuscan farmers 100 years ago. For more information on this and other ‘meet the author’ evenings, see www.papex.it.

A version of this article appears as the preface to Lisa Clifford’s book Death in the Mountains, the True Story of a Tuscan Murder, published in 2009 by Macmillan Press.

Lisa Clifford was born in Sydney, Australia. Following a career in radio and television journalism, she now contributes opinion pieces, guides and lifestyle articles on Italy to international magazines and newspapers. She is the author of Walking Sydney, The Promise, An Italian Romance and Death in the Mountains. 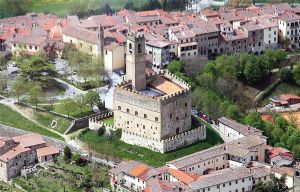 It’s odd that very few foreigners have ever heard of Casentino. In the upper Arno valley of eastern Tuscany, it is home to 36,000 hectares of some of the most beautiful natural parklands in Italy. These ancient woods are packed with wild boar, deer, porcini mushrooms and 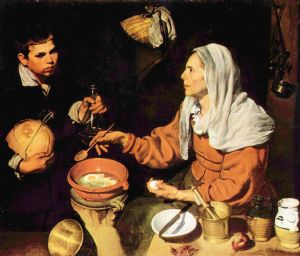 One day, my 14-year-old daughter looked at me and waved, a swing of the arm that looked more as if she was drowning than greeting. She was in a huddle with her Italian grandmother in the kitchen and had been in it for some time. Nonna was gesticulating 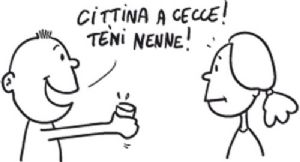 My mother-in-law likes to tell my children the Tuscan joke about the cat that waited for the mouse to emerge from its hole in the wall. For three days, the cat sat outside the mouse's home, waiting, waiting, waiting. When eventually the cat barked ‘bow wow,'