If you’ve been strolling around Florence in the past few weeks and noticed 10-meter banners hanging from building windows, or crowds of frantic teenagers blocking traffic and playing hooky from school, you guessed right: something is going wrong and somebody is complaining about it.

In this particular case, it is the students of public high schools all over Florence who have been ‘occupying’ their schools as a sign of protest against the reforms recently implemented by the minister of education, Maria Stella Gelmini. The Riforma Gelmini consists of eight billion euro in funding cuts to public schools over three years, meaning around 144,000 jobs lost; no money for substitutes, special assistance and teaching, improvements or aids. However, these cuts do not affect resources allocated by the government to private and religious schools. Long story short, public schools have no money, and private schools do. It is not hard to comprehend why students and parents would be concerned about this reform.

I participated in an occupazione last year, and it all looked extremely rehearsed: the teachers (those who showed up, that is) would sit around talking to students or colleagues, while the students would shout in protest and wave signs. However, this year, the occupazioni have lasted longer and become increasingly violent. On October 19, the students of one of the occupied schools vandalized it and barricaded it with furniture and chains, and the police arrested kids found vandalizing buildings or possessing smoke bombs or narcotics inside the schools. Students participated in a sit-in in piazza Signoria and several marches in the streets. On October 16, during a Saturday night occupazione at the Liceo Capponi, a 15-year old girl was taken to the hospital for alcohol poisoning. After this incident, the protests were cut short, but some schools persisted, ‘We finished on October 18, but we’re continuing with flash-mobs,’ said a student at Castelnuovo.

But all is fair when fighting for your education, right? Well, yes, if you know what you’re fighting for. Many-too many-students go along with the protests just so they can skip school, drink, smoke and have fun during school hours. ‘The occupazione is seen as a holiday, and it’s quite ridiculous,’ said a student at the Istituto Tecnico Duca D’Aosta. ‘Kids think they’re being revolutionary, but there’s nothing revolutionary about getting drunk and smoking weed,’ he continued. Another student said, ‘I think we shouldn’t generalize. I don’t see it as they do, but they have the right to stand for what they believe in.’ While I was interviewing some students at public schools, many didn’t even know what Gelmini’s reforms consist of. ‘I bet more than half of them haven’t even read the reform,’ said a student at Poggio Imperiale.

Does this mean the students do not have the right to protest? Of course not, but they also have the right to an education. If protesting means vandalizing schools and risking an ethylic coma, does that not quash the main objective of an occupazione, and thus a better education? 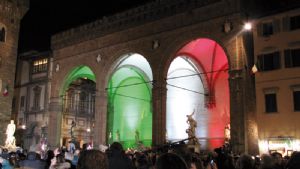 Fratelli d'Italia, l'Italia s'e desta, dell'elmo di Scipio, s'e cinta la testa. That's all I knew by heart. I also could not identify the precise year Italy was united. (Yes, I know what you are thinking). Now I can, because on occasion of the

We all know and probably own the iconic shirt from the Hard Rock Café: a simple white tee with the Hard Rock's logo and a major city's name written underneath. It has become, along with the ‘I heart NY' shirt, probably one of the most clich& 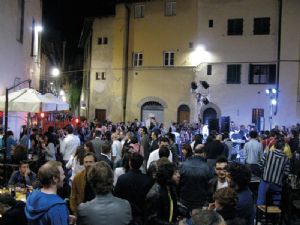