When the frosting hits the fan

Perhaps it's some kind of maternal sacrilege, but I must confess a loathing for birthday parties, which, here in Italy, tend to be of epic length, demanding the ferocious stamina of a gladiator fighting off a pride of peckish lions. They typically involve weird clowns, animatrici of arbitrary talents,

In addition, these kids’ gatherings inexplicably attract the enthusiastic presence of adults (but let’s face it, Italians leap at any excuse to party), and I’m nothing if not unenthusiastic when it comes to jawing banally for four hours while my temporal lobe throbs and a guy in a fuzzy orange wig with a five o’clock shadow and smoker’s cough juggles water balloons.

So it was with some trepidation that I recently gave in to my seven year-old daughter Gemma’s pleading and agreed on a small party at home with a handful of her Italian classmates. I reasoned (foolishly, I now realize) that a reduced contingent of enemy troops could be easily contained, and I planned a simple mini-menu for the kiddies: a nod to Florence with homemade schiacciata, an array of universal junk food favorites like popcorn and potato chips, and the crowning glory and guaranteed hit-homemade vanilla cupcakes with girly pink frosting, each topped with colorful Skittles from our hoarded American stash. (To please Her Highness, I even used Hello Kitty paper plates and cups-and if you need to know one thing about me, it’s that I loathe Hello Kitty even more than I loathe birthday parties).

The midget revelers arrived and festivities commenced in the garden. They set upon the schiacciata like famished wolves, and soon the chips were flying and the Fanta flowing amid great whoops and squeals and barbaric yawps. When the time came to unveil the pièce de résistance and sing ‘Tanti Auguri,’ I was practically trembling with motherly anticipation at the oohs and aahs my sumptuous little pastries would surely receive.

When you live abroad there are, inevitably, times when you put your best cultural foot forward only to be tripped-up by local mores and expectations and fall flatly-and unceremoniously-on your foreign face. I spent the next 10 minutes scraping frosting off cupcakes and picking up regurgitated Skittles for the half-pint food critics (future mayors of Forte dei Marmi and Lucca, perhaps?), trying not to let wounded pride and righteous indignation ooze from me like yellow bile as mutilated cupcake corpses piled up on the table. I was perplexed-what kids don’t like cupcakes? Moreover, what Italian kids wouldn’t like pure sugar in the form of enticing pink frosting? For God’s sake, they grow up eating it with a spoon right out of the sugar bowl! Well, my half-breed children adore frosting and were content to scarf up the leavings of their compadres, and I brought out a big bag of Gocciole cookies to appease the disgruntled natives-which is perhaps the reason why things quickly degenerated into something out of Lord of the Flies. The kids became, in a word, scatenatissimi, and the party ended with Gemma-normally a good kid-hitting her older brother over the head with a very American Louisville Slugger, after which she was compelled to add a new word to her English vocabulary: ‘grounded,’ as in ‘you are, for two weeks.’

When you call a foreign country home and summer rolls around and you find yourself planning a vacation to the old place you used to call home, you realize how strange your life has become. You are now, in many ways, a tourist in your own land. You find yourself

Warning: this mom may be hazardous to your child’s health

I truly wasn't trying to harm her. It was early April-that cruel month when birthday invitations ramp up again, when kids who've gone stir-crazy all winter have learned with fiendish skill how to push all your buttons (and push them, with relish)-and my daughter 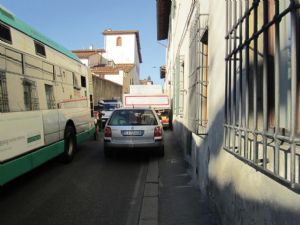 Were Dante to write the Inferno today, I have no doubt that commuting in Florence would be among the punishments in his nine circles of Hell. Thus, I was rather nonplussed to read Mayor Matteo Renzi's assertion that his favorite means of getting around Florence is on foot, as