Filmmaker David Battistella moved to Florence from Canada earlier this year to pursue his dream: writing and producing a feature film based on Ross King's 2000 book Brunelleschi's Dome, about the life of Filippo Brunelleschi and the building of Florence's Cupola. This column, which began with TF

Filmmaker David Battistella moved to Florence from Canada earlier this year to pursue his dream: writing and producing a feature film based on Ross King’s 2000 book Brunelleschi’s Dome, about the life of Filippo Brunelleschi and the building of Florence’s Cupola. This column, which began with TF 149, chronicles Battistella’s pursuit of his dream, including anecdotes of his new life in Florence and his efforts to finance and launch his ambitious project. He also shares his experience of being a ‘reverse immigrant,’ an Italian born abroad who returns to an Italy that is vastly different from the one his parents left in the 1950s. 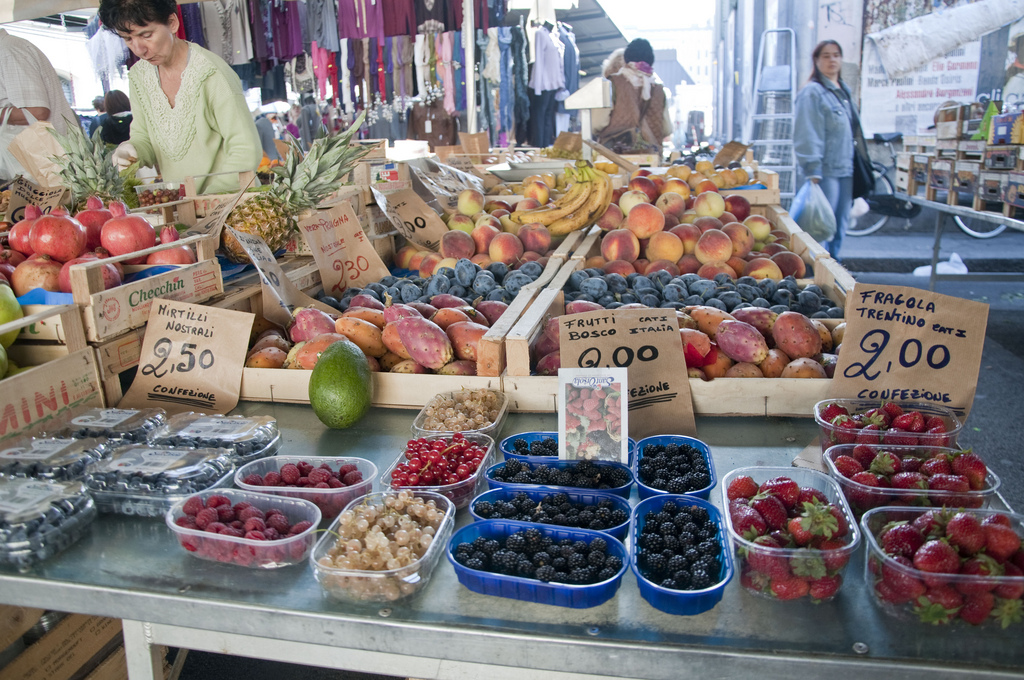 After my dining adventures in the city, I found what turned out to be my favorite market in Florence. Sant’Ambrogio is a lively, well-stocked market that happens to border Florence’s Faculty of Architecture. Like most open markets, it is welcoming and reinvents itself daily (see TF 140).

Getting there is a healthy walk from where I live, but with its ample supply of well-priced and always-fresh food it’s worth the journey. A crisp winter walk in Florence is refreshing and warms the body against the damp cold of a winter day.

One day, my route home was along via Pietrapiana, which was historically the heart of Florence’s shoe district, housing shoe factories and artisans. Along this route I passed the building that was once the home of Lorenzo Ghiberti, the archrival of my film’s hero, Filippo Brunelleschi.

Let’s just say that for a single guy walking through Florence, there is plenty to observe. Walking along via Pietrapiana, minding my own business, I was suddenly aware of the glare of a pair of bright red, knee-high patent leather boots. I’m a sucker for a woman in red boots and this pair stopped me in my tracks.

I had been taking photos of people in their winter wear, and I just had to have a photo of those boots. Politely, I turned and asked the young woman if I could take a photo of her boots. ‘Certo,’ she replied with a dimpled smile, her one word meaning ‘of course.’ I fiddled about with my phone and snapped one great photo. Then I explained why I was in Florence. She smiled. I smiled.  I thanked her and walked away.

Ten seconds later, it occurred to me that I should have offered her an espresso. I turned back to ask her, but . . . poof! The woman in the red boots was gone! I wanted a chance to finish the conversation I had so abruptly, thoughtlessly ended. But Florence is a small town, I reminded myself. Surely I would see her again.

For a while, I continued to take that route to and from the market, thinking I might see her. Then I started telling the story and showing the photo to some Florentine friends who dubbed her, la donna con gli stivali rossi (‘the woman with the red boots’).

It soon became very much an intrigue. Dinner parties, no luck; espresso shops, no luck; boot manufacturers, no luck; Gucci, Prada, Ferragamo, no luck. A cropped photo of the boots went out to friends’ networks, but still no luck. The legend was growing.

Then, I got a possible lead during dinner with friends.

It turned out that four of the people at the table worked in law enforcement, as state police and  local detectives. After I told them the story, they joked that they would put the photo out over the police wire to track her down. They, of course, did not do so, but the incident helped to amplify the legend.

To date, I still haven’t crossed paths with la donna con gli stivali rossi, but I wish I could buy her a drink and tell her how much entertainment I’ve gotten out of her allowing me to take a simple snapshot of her red boots.

In the meantime, I’ve been back to the archives and have had a very special meeting at a rarely visited place in the church that Brunelleschi helped build.