Get lost, will you?

There are many ways to find the multitude of faces and places of a more authentic kind of Florence than the one you will see in and around piazza Duomo and the Ponte Vecchio. Finding Florence is an effort all study abroad students should make to seek true authenticity, to

There are many ways to find the multitude of faces and places of a more authentic kind of Florence than the one you will see in and around piazza Duomo and the Ponte Vecchio. Finding Florence is an effort all study abroad students should make to seek true authenticity, to uncover the city’s secrets. Thirteen-year-old Florence local, Lara Breckon, gives us a great way to ‘find Florence’ using public transport. Indeed, taking the bus in Italy is an experience that all short- and long-term residents should try at least once, for it awards a unique view on a slice of Florentine life.

Have you ever wanted to explore unfamiliar parts of Florence with little more effort than walking to a bus stop? It’s easy with the Ataf bus game, in which every journey becomes a city adventure. This is how it works. Simply go to your nearest bus stop and get on the very first bus that comes along. In a notebook, write down at random half-a-dozen numbers between one and ten (3, 7, 3, 1, 8, 4, for example). This will be the code that will tell you when to get off each particular bus. So in our example, you first alight after ‘3 stops.’ Then you wait for another bus to come along, which has a different route. You stay on this bus for ‘7 stops.’ Repeat the process until you have used all of your random numbers.

Why linger on your usual bus routes when you have the chance to explore? Be creative! You will be amazed at where you go although, funnily enough, when I played the game with my sister, we always seem to end up at McDonald’s near the Santa Maria Novella train station. (Note: Chicken nuggets are an irresistible magnet at the end of the game.)

To add to your happiness, it is important to choose the right companion: somebody with whom you do not mind getting lost! It is also helpful if they have some idea of which buses lead home. I would advise younger citizens to go with a trusted adult. (Note: hot chocolate in an unfamiliar café tastes just a little bit better when you know that you will get home safely.)

I last played the game with my dad on a very cold December day. We chose the unfamiliar 7B and then the 3, and in no time at all we found ourselves to the north of a set of railway tracks, a part of the city we had never seen before. Things were very different there. Florence’s busy central streets, bustling with local and tourist pedestrians, had been replaced with a peaceful, slower-moving crowd. We found ourselves in a small market surrounded by families and friends, where we enjoyed a very warming cioccolata calda con peperoncino.

So far so good, but we had not reckoned how long it would take us to return to the centre. We checked a timetable and found that the only way to get back was to travel further outside of the city. But by that time, our code had told us that we should’ve got off after ‘3 stops’, taken a new bus and stayed on that bus for ‘1 stop.’ This was not very helpful, so we decided to be creative and add the two code numbers together and take ‘4 stops’ to the end of the line. Then we were able to take ‘8 stops’ back to the centre of the city. Phew! (Note: there is no point in making life difficult by sticking rigidly to the rules.)

Make sure you play the game on a day when you do not have other, more important appointments. It takes a minimum of an hour to play, but it is much more fun if you bus-hop for two or three hours and don’t have to worry about the time. After all, we are in Italy, and catching city buses will definitely take time! (Note: You will soon discover that Italy’s public transport is marred by all-too-often strikes and tardy buses; so embrace fatalism like the Italians do and just enjoy the ride!)

I love the feeling of freedom the Ataf bus game gives. Normally when I am on a bus, I am in a rush, irritated by delays and always checking the time. I enjoy being free to take the first one that comes along, get on and off at random and, through the bus window, watch our beautiful city buzz with life around me.

If you think the random nature of the game is too much to handle, you could opt for Version 2. Just take as many different numbered city buses as you can within the hour. This version is as much fun as Version 1: once, when playing with my sister, we rushed on to a ‘D,’ and a woman asked us where we were going. We replied, ‘We have no idea.’ She looked bemused.

Lara K. Breckon is a 13-year-old expat and Florence resident. She is an avid writer and will be the author of upcoming articles for TF's FlorenTeens column. 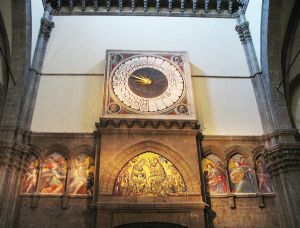 A city with stories

Florence is a wonderful city, full of art, culture and stunning architecture. But, from a teenager's point of view, wandering around ‘some old city' in the boiling hot sun or under the cold, wet rain to visit the tomb of ‘some dead guy' or ‘some paintings'