The celebrations of Vespucci Year continue with the
opening of the exhibit at Palazzo Pitti, New Frontier: History and Culture of
the Native Americans from the Collections of The Gilcrease Museum of Tulsa,
Oklahoma. Co-organizer Laura Johnson reflects on the title and gives TF a
personal glimpse behind the scenes.

The exhibition New
Frontier pays tribute to two men of extraordinary vision separated by 450
years: Amerigo Vespucci, who died in 1512, and Thomas Gilcrease, who died in
1962. At the exhibit’s entrance, in the Andito degli Angiolini at Palazzo
Pitti, visitors view on the right a portrait of Amerigo Vespucci (from the
Uffizi’s Vasari Corridor collection), and a portrait of Thomas Gilcrease on the
left. They are connected through their belief in something beyond the horizon,
in the idea of a new frontier.

I was born the year before President John F. Kennedy’s
assassination, so it is impossible for me to remember firsthand his New
Frontier project or the feeling that there was ‘another world’ to discover
through space exploration. Years later when I was studying at the University of
Oklahoma, Norman and the University of Tulsa, I always felt that I was
following the dictum of the American author Horace Greeley, who, in the 1830s,
stated, ‘Go West, young man,’ as I drove the 675 miles (1,110 km) to Tulsa from
my home town of Chicago, where the famed Route 66 starts. It is referred to as
‘The Mother Road’ in John Steinbeck’s The Grapes of Wrath and
commemorated in a song that idealizes the journey to new states or frontiers.
Therefore, when it was decided that the title for the exhibition from the
Gilcrease Museum was to be the New Frontier, I found my mind wandering back to
my more insular viewpoint until I viewed the theme on a grander scale, from a
European’s perspective.

The ‘frontier’ concept suggests a situation that
expands beyond one’s native shores to uncharted territories. Before the
late-fifteenth century, historians had written about the influences of
explorers and the Nuovo Mondo or what could also be called a Nuova
Frontiera. The first room of the exhibition in the Andito degli Angiolini
features artifacts used by the indigenous peoples and landscape paintings of
the unspoiled majesty of uncharted lands of this new frontier. The other five
rooms display pottery, baskets, weavings, and bronzes demonstrating the
customs, religion and way of life of a few of the many tribes of North America.
As the visitor progresses through the exhibit, influences from Europe and the
effects of colonization are clearly noted in how they dressed in European garb
instead of a traditional manner. In the early 1900s,
photographer-anthropologist Edward S. Curtis believed that ‘information is to
be gathered … respecting the mode of life of one of the great races of
mankind.’ American tycoon J.P. Morgan commissioned Curtis to produce a series
on the North American Indians. In order to demonstrate his passion for
truthfully presenting the indigenous peoples, Curtis made over 40,000 images,
of which a selection is on exhibit.

The New Frontier exhibit continues in the Galleria del
Costume on the second floor of Palazzo Pitti and features six rooms with
specific themes, such as the horse, buffalo and children. The highlights
include several dramatic paintings by Frederic Remington, and the beautiful
painting Crucita-Taos Indian Girl in Hopi Wedding Dress and Dried
Flowers by Joseph Henry Sharp. Gilcrease and Sharp knew each other. As
collector and artist respectively, they shared many common interests and both
were concerned with authenticity. Gilcrease even participated in archeological
digs to insure the provenance of the pieces for his museum. Sharp used the
actual items owned by the figures in his paintings, which were then also added
to Gilcrease’s collection. The Galleria del Costume’s Sala di Ballo features
the white boots, colored sash, dress, and ceramic vessel in the still-life
painting.

Thomas Gilcrease may be described as a man with a
passion to preserve and revere Native American cultures. Just like Vespucci,
Gilcrease realized a new frontier, which he simply called ‘a track in life.’ At
the age of nine, Gilcrease, who was one-eighth Muskogee-Creek Indian on his
mother’s side, was granted 160 acres (68 hectares) of land just south of Tulsa
through the 1899 Dawes Commission allotment process. By his early twenties, he
had become a multimillionaire when this seemingly unproductive plot of land
gushed forth the black gold of oil and he continued to buy other oil-rich land
tracks. Like most youth, Gilcrease was restless and wanted to discover the
world beyond his homeland. His travels took him to all parts of the world,
always with an interest in learning about different cultures and educating
himself by reading voraciously. He mastered French and Spanish and was
especially interested in geology.

Because of his frequent visits to the great museums of
Europe, and realizing that there were no great museums in the United States
that specifically addressed the history of Native Americans, Gilcrease was
inspired to establish one. In 1943, he opened his first museum and by 1949 he
had built one near his home in Tulsa, where the museum is still today, now with
a collection featuring 100,000 rare books, maps and documents as well as more
than 250,000 artifacts. The Gilcrease Museum is owned by the City of Tulsa,
which has partnered with the University of Tulsa to steward the museum and its
collection.

In Gilcrease’s memoirs, we note how warmly he embraced
Italy. He speaks of walking its cobblestoned streets and admiring the
antiquities of Rome, the monuments of Florence, and the canals of Venice. His
lifelong motto was ‘every man must leave a track and it might as well be a good
one.’ We should imagine this exhibit as part of that track.

Perhaps on this, the 50th anniversary of Gilcrease’s
death, we can say that a full circle has been made. An unforeseen consequence of
his vision has been achieved with the New Frontier exhibition of Native
American art in Florence during the quincentennial year of Amerigo Vespucci,
the man who gave his name to the new frontier known as America.

New Frontier: History
and Culture of the Native Americans

From the Collections
of The Gilcrease Museum of Tulsa, Oklahoma 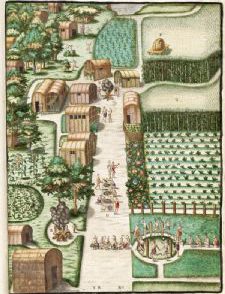