Sailing tortoises and a UFO

Your kids might find an afternoon spent at a museum as interesting as watching paint dry, but Florence’s Palazzo Vecchio holds some hidden curiosities sure to pique their interest. Who knew that within the medieval walls you can find 100 sailing tortoises and a UFO?

During the Renaissance, every important family had a motto that expressed its philosophy. Cosimo I, who came to power in Florence in 1537, looked to the glorious days of the ancient Roman empire. He borrowed the maxim of the emperors Augustus and Titus, which was festina lente, or hasten slowly. As a symbol of this idea, Cosimo chose a tortoise with a wind-filled sail on his back to remind him to find the perfect balance between speed and patience.

Representations of these sailing tortoises can be found throughout the decoration of Palazzo Vecchio in many different forms: some are flying, some are in the water, and some are with angels. There are approximately 100 of them scattered across the ceilings, walls and floors of the palace. There is even a special ‘turtle spotting’ tour for kids offered by the Children’s Museum, but adults can have fun, too.

The ‘turtle hunting’ tour is for families with children ages four through seven and lasts one hour and 10 minutes. During the first part of the tour, children watch a fun film explaining the significance of the turtle with the sail, told in the form of a fable recounted by a turtle. Then, of course, there is the all-important hunt through the palace to spot some of the sailing reptiles.

You can also purchase a family kit, which comes in a kiddy backpack in the form of a furry green turtle. It contains materials useful in the discovery of the museum, such as a map, a pair of binoculars, and pictures of items to spot as you travel through the gallery.

But there is even more intrigue to be discovered in Palazzo Vecchio to house the government offices. If you have ever been next door to the Uffizi, you might feel that you have seen every possible version of a Madonna and Child. However, in Palazzo Vecchio, you will be surprised to find a very unusual one, nicknamed the ‘Madonna and the UFO.’

The painting shows something unusual in the sky just over the Madonna’s shoulder. At first glance, it looks like it might be a bit of damage to the picture, but on closer inspection you can see that it appears to be a dark bowl-shaped object with rays of light emanating from it. A man and a dog seem to be gazing up at it, and some ‘UFO believers’ consider it proof of a medieval close encounter. Of course, there is no piece of historical documentation that supports this theory, and the less colourful and more probable explanation is that it represents the heavenly announcement to the shepherds of the birth of Jesus. Take a look for yourself and see what you think.

While your children may enjoy a search of the gallery on the hunt for the Madonna ‘with UFO’, the process might get a little out of control. If they need to be guided to the painting, it can be found upstairs in the Sala d’Ercole. Its official name is Madonna Col Bambino e San Giovannino (Madonna and Child with the Infant Saint John). It is from the end of the fifteenth century and the painter is unknown, though it has been attributed to at least three artists of that era.

But if UFO hunting is not your thing, take your kids on one of the many theatrical guided tours, in either Italian and English, including a tour to discover the other animals frescoed on the walls of the palace, led by an elf and a ‘talking’ parrot. Another tour is led by Duchess Eleonora de Toledo’s favourite lady-in-waiting, Isabel de Reinoso, of the feast rooms and the family’s private chambers. Both parents and kids can also enjoy the fresco painting classes, which are held every Friday afternoon.

No children in tow? There are also interesting tours for adults at Palazzo Vecchio, and they can be done in English. For these, and for the kids tours, register in advance by telephone or by email.

Margo Lestz, a retired administrative assistant and perpetual student, fell in love with Florence 12 years ago, when she took an art history course here. She was recently in Florence for three months to study the Italian language. Read her blog: curiousrambler.com 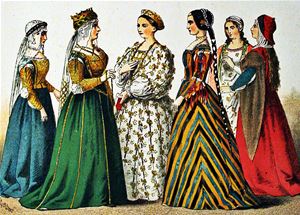 Medieval Florence, like many European cities, had ‘sumptuary laws’ to regulate luxury items, with an emphasis on women’s clothing. These laws proved difficult to enforce upon the clever Florentine women, however. All clothing was regulated, but there were few—if any—prosecutions brought against 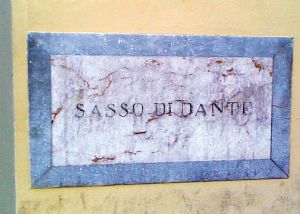 If you are seeking poetic inspiration, try following the footsteps of the nineteenth-century poets who found it at Dante's stone, the Sasso di Dante.     A translation of the Divine Comedy published in England in 1814 popularised Dante in British society, and ‘Dante's Stone'