Polite and pensive, William Blacker seems the last person you would imagine to leave a comfortable life in England and go on a whim to live for eight years in a remote Transylvanian village. But that’s exactly what he did. Now dividing his time between England, Italy and

Polite and pensive, William Blacker seems the last person you would imagine to leave a comfortable life in England and go on a whim to live for eight years in a remote Transylvanian village. But that’s exactly what he did. Now dividing his time between England, Italy and Romania, Blacker wrote a book about the years he spent in the almost medieval villages of Transylvania. Entitled Along the Enchanted Way, it was published in England in 2009 and came out in Italian last year.

Along the Enchanted Way

was largely written in Sorano, a secluded village in Tuscany’s southern Maremma, where Blacker’s house, a romantic tumble down tower perched on the edge of a cliff is ‘nearly habitable,’ decades after he bought it. His love affair with Sorano, an enchanting, car-free medieval hill top town, began when he moved to Italy to escape the pressure of getting a ‘real’ job.

‘You can’t sit reading books every day forever. But at the time that’s what I wanted to do. This did not impress my parents very much, so I came up with the solution of going to Italy and learning Italian, because I knew that there was a very good library full of books’ at Florence’s British Institute. In Florence, he lived in a shed in a garden in via dei Bardi where there was no electric light, so he read book after book by the light of a row of candles on his desk.

Blacker bought the tower in Maremma in the early 1990s, ‘on a mad whim after a weird tour of southern Tuscany with two English girls, a Scotsman with his BMW and an Arab called Abdul.’ Captivated by the building, he spent several years buying it and slowly started the process of transforming it into a home. But before long the project was put on hold: Romania was calling.

Exploring Eastern Europe after the fall of the Berlin wall in 1989, Blacker stumbled across a medieval world tucked away in northern Romania. Enchanted by the villages, untouched by modernity, in which televisions were unheard of and people wore linen smocks and farmed using horse-drawn ploughs, Blacker stayed for over 8 years. ‘I had thought places like this did not exist any more, but they did, and my whole life started to make sense, seeing how life in these medieval villages worked. I felt as though I was living in a novel by Tolstoy or Hardy. What they described was almost exactly the same as my daily life there’. Living first with the Maramureşeni in the mountains near the Ukrainian border, and later with Gypsies in a Saxon village, he learned the local dialects, how to scythe the hay meadows, participate in courting ceremonies and fend off evil with Romanian magic.

He now lives between three countries: Italy, England and Romania, where he returns often to see his 7-year-old son. ‘Our ordered life in the West can become terribly depressing, so I love being plunged back into the chaos of Gyspy life in Romaina, although sometimes it can be bit much! So I leave … but then after being in England or Italy for a while, I start longing to go back. Although there are disadvantages of living such a peripatetic life, there are also lots of advantages—you come to places with fresh eyes, and when you get bored of somewhere you just move on. It keeps one on the ball,’ he observes.

Returning to Romania these days is bittersweet however: the medieval world that Blacker knew when he first moved there is gradually disappearing. With the new asphalt roads have come speeding cars and city salesmen, the streams have filled up with plastic packaging and slick TV advertising convinces the villagers they can’t live without all sorts of modern factory products, which, Blacker affirms, they never needed or wanted before.

Blacker is particularly affected by the damage to the Saxon villages where he lived with the Gypsies. A fascinating, centuries-old micro-culture within Transylvania, the Saxons arrived in Romania from northern Europe in the twelfth century, and have retained their traditional clothes, language, customs and building style ever since. A great many of them have now moved to Germany, leaving their beautiful houses and churches behind to fall into disrepair or be destroyed by new owners.

Saddened by this obliteration of the past, Blacker has set up a conservation charity to help preserve these historic buildings: the Anglo-Romanian Trust for Traditional Architecture (www.artta.org.uk). ‘We’re getting a lot done, restoring houses, and trying to have them legally protected and so on. The owners want to knock them down, and rebuild them in a new, preferred style that is totally alien to the area. Imagine a Cotswolds village, take out one of the houses right in the middle and replace it with a concrete block, painted bright orange. I really can’t emphasise enough how sad it is. However, we’re very lucky as Prince Charles has been very supportive. He comes often to visit the villages and it helps enormously in raising the profile of the cause.’

Living between the two countries, Blacker is often struck by the plight of Romanians in Italy. In his book, he tells the story of a boy from his village in Romania who left, having been promised a good job in Germany. Instead, the ‘boss’ took him and his friend to Salerno, to live with hundreds of Romanian beggars among the rats in an unfinished apartment building. Forced to beg and hand over the money to their ‘boss,’ they were beaten if they didn’t collect enough money, and lived under the constant threat that their legs or arms would be broken and twisted to make them more effective beggars.

‘This is sadly very common. A large proportion of the beggars you see on the streets are probably being forced into it by ruthless bosses … Romania’s reputation in Italy is devastated by just a few unscrupulous thugs. Most Romanians however are quite down-to-earth and hard working, and honest people.’

At a dinner in Milan to celebrate the launch of the Italian edition of his book by Adelphi, Blacker chatted with one of the women who was serving, who happened to be from the Maramureş. ‘I was speaking Romanian to her, telling her how the book is very complimentary about Romania and Romanians, and how happy I had been living there. And as I was talking I noticed something on the tablecloth. I looked up and the tears were pouring down her cheeks and dropping onto the tablecloth. Romanians like her— good, honest, utterly reliable people—are looked down on here simply because they are Romanian. She was moved by what I was saying, and I was surprised to see the effect of my words. For her, it was a wonderful breath of fresh air to hear someone being nice about her country.’

A true adventurer and free spirit, Blacker lives a life the rest of us can only dream of. Luckily for those longing for another chance to travel the ‘enchanted way’ with him, plans are underway for a second book. 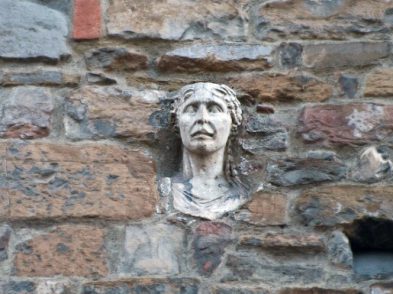