Not long ago, I wrote about the lantern that sits atop the Cupola. I spoke about the fact that it took twice as long to build as the Cupola itself and Brunelleschi never saw it finished. 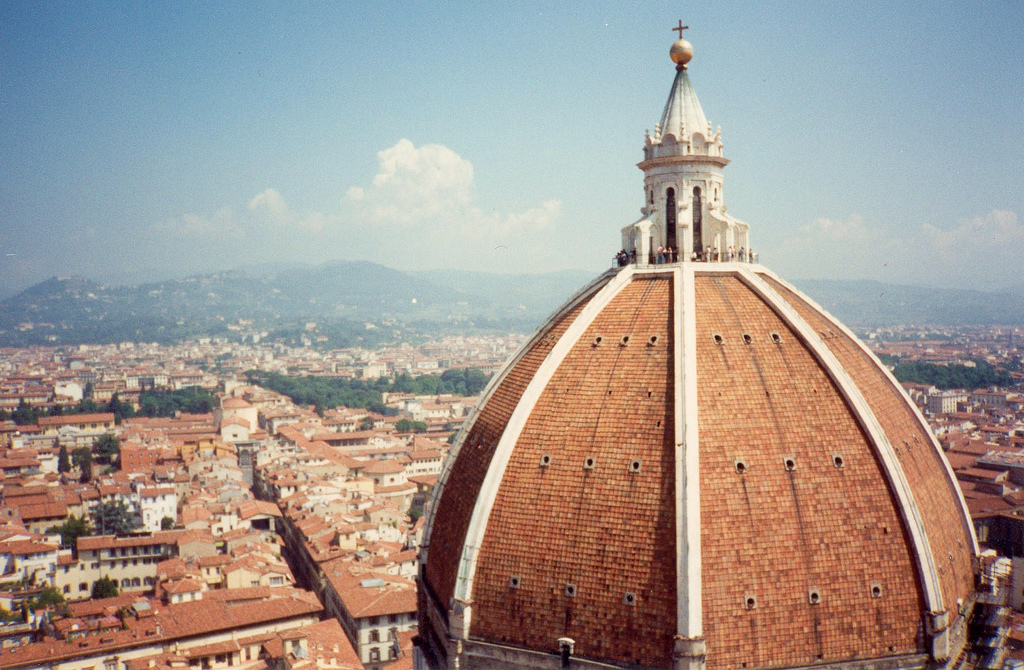 The very peak of the Duomo! | Photo by Henry Burrows on Flickr

Now and again, I climb the Cupola. Mostly, I do so to take photographs or accompany guests, but probably once every two months I go up there just because I like to. It’s a bit of a ritual for me. I enjoy the experience because it takes me back to a fifteenth-century reality. Often, I think about the city at that time and the pride that went into building the cathedral. I think of the men who took these steps almost every day for 16 years.

My thoughts are not just nostalgic. I like to look at the brickwork, examine the stone staircases, which at times spiral upward in a seemingly never-ending march toward the heavens. Maybe those who built the Cupola did so to be closer to God? At a time when spaceships had not allowed us a view of the planet, when the heavens were ‘right there,’ just beyond the top of the lantern, with the stars not far behind, perhaps the dome of the world seemed in striking distance.

Imagine a starry night in Florence when the Earth’s population was a fraction of what it is today and Florence was one of the most populous cities in Europe. When terminology like ‘light pollution’ was as distant a concept as black holes, electricity and the automobile. My view might be romanticized, but I believe that the Renaissance men were creating what they did based on love and beauty—and probably based a little bit on superstitions about bad luck.

I have imagined Brunelleschi walking up these steps on the darkest of nights, in his darkest hours, wondering how the whole thing would be built and whether it would succeed. Step after step, turn after turn, hallway after hallway, I twist and wind up to the lanterna, occasionally stopping to peep out of a small porthole window at the terracotta city of the Renaissance, begging my mind to remove any of the modern conveniences and feeling the same stones under my feet as my now Florentine forefathers once did (I can say this because I am now an adopted resident of Florence).

My project has helped me develop a sense and appreciation for all of this. Perhaps it has even helped me look at the world in a completely different way, although I think it takes little to be courteous, or loving, or to create something beautiful. We can still look at the works from those days and want to protect them and immerse ourselves in their beauty, which has affected the whole of history.

Indeed, we can’t walk into the Uffizi or Palazzo Pitti in Florence or any museum in the world without a sense of respect and gratitude. As much as we would like to reach out and touch the Mona Lisa at the Louvre or Michelangelo’s David at the Accademia, we don’t; we wouldn’t.

Here at the Duomo, however, the same respect is not afforded. Why? Because it’s a building? Perhaps one of the most important ever constructed? Arguably, to me at least, the cathedral is the crown jewel of all of the art in Florence because of what it represents and all that it has brought to the city over the centuries.

So, I can leave you only with images. The images that now exist because of people who believe it is their right to vandalize beautiful things, people who possibly have no respect for stone, or marble, or the hands that put them where they lay.

The pen is mightier than the sword, I suppose, and now graffiti is part of a storied history. Pen ink on marble hoisted to great heights, at great expense and with great effort to create an indelible image for a city. Up close, it’s much sadder to see than in the images I present here.

Please don’t come to this city and feel you have to leave your mark. Florentines left their mark 600 years ago, and it far outweighs that of scribbled ink on marble.