By Anita F. Moskowitz   Giovanni Bastianini has been called the greatest sculptor of Italian Renaissance portrait busts—living in the nineteenth century! His short life (1830-1868), and the scandals associated with his work, would be, if not worthy of a modern Vasari, certainly core material for a

Giovanni Bastianini has been called the greatest sculptor of Italian Renaissance portrait busts—living in the nineteenth century! His short life (1830-1868), and the scandals associated with his work, would be, if not worthy of a modern Vasari, certainly core material for a Hollywood film. 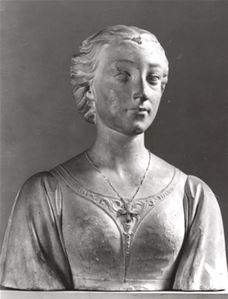 Not widely known to the general public, he is the constant cause of worries among museum curators regarding the authenticity of their Renaissance collections. A terracotta bust of the 16th-century poet Giralomo Benivieni was purchased by the Louvre as a Renaissance masterpiece for a huge sum—more than had been paid for the Venus de Milo! Bastianini’s Renaissance-like sculptures are also found in the V&A Museum in London, the Musée Jacquemart-André in Paris; the National Gallery in Washington, D.C. and the Galleria d’Arte Moderna in Florence.

Was Bastianini really a forger, knowingly creating and selling sculptures under false pretenses? This common assumption has recently come under closer scrutiny and, indeed, the evidence suggests that he was, rather, a ‘neo-Renaissance master’ and not a forger, more talented and wide-ranging than he has been given credit for. Born near Fiesole into a family of stoneworkers in the nearby quarries, he was poor and uneducated. As a teenager he apprenticed in the studios of two respected members of the Accademia di Belle Arti. Although he never had the advantages of an Accademia education, copying from Old Masters was in fact the accepted mode of artistic training until well into the 20th century, a training which enabled sculptors to become excellent restorers of antique and Renaissance works and to create tombs and portraits evocative of the Renaissance, much in demand at the time.

Around 1848 the dealer Giovianni Freppa discovered the young Bastianini’s remarkable facility for imitating Renaissance sculpture, and made him an offer: if he agreed to work only for Freppa, he would receive a stipend with room and board, be taught sculpture techniques and be supplied with a studio and tools. Accepting the offer, Bastianini worked for Freppa from 1848 until 1866. Some of his works were sold as Renaissance, including the terracotta Benivieni, for which Bastianini received 300 lire. Later, after heated bidding at a Parisian auction, it was purchased as a Renaissance masterpiece by the director of the royal museum, the Louvre. When news of the fantastic sale reached Florence it provoked howls of laughter among Bastianini’s acquaintances, who relished the fact that their compatriot’s work had fooled the French; the sculptor, however, became gloomy, realizing how his earnings for the Benivieni paled beside the 13,600 francs for which it was sold (lire and francs had equivalent value in the 1860s). The same thing happened for other works produced during those years: Bastianini received 200 lire for the Chanteuse Florentine which then sold for 9,000, and 500 lire for the Savonarola which later fetched 10,000. After the sale, the Benivieni bust was exhibited in the Louvre near sculptures by Desiderio, Mino, and Michelangelo. When word emerged that its author was a living Florentine, the French were outraged–but not because the Louvre had purchased a forgery.  Ridiculing Bastianini, they insisted that he was an imposter claiming credit for a major archeological find, whose style and technique were incontrovertibly of the Renaissance.  Witnesses and evidence supporting Bastianini’s authorship could not dissuade the French, who even threatened to have him placed in the insane asylum at Charenten!

Bastianini actually worked in several modes, including one that appealed to the Romantic current of the mid-nineteenth century. A number of works of this type can be found in the Galleria d’Arte Moderna in Florence, including Nymph and Satyr, Fisherboy and Putto with Mandolin. He also executed fine portraits with neither neo-Renaissance nor overtly Romanticizing elements such as busts of Eleonora Pandolfini Nencini, muse of Ugo Foscolo, and count Franz O. Jennison, a Bavarian diplomat. Without idealizing or romanticizing the sitter, the sculptor conveys each individual’s dignity and status. Clearly, these sitters and patrons rejected the then far more fashionable, neo-classical Canovian style in favor of a dignified realism. In the portrait of Filippo Antonio Gualterio, who was active in Risorgimento politics, Bastianini not only describes the sitter’s external features but also explores the interior tensions and anxieties of someone deeply engaged in the civic and national affairs of the day. All of these works are in the Galleria d’Arte Moderna in Palazzo Pitti.

Bastianini also, however, created ‘portraits’ of historical persons, and it is these that have provoked the controversies concerning authenticity and forgery. Among them is a series of beautiful Renaissance women given names beloved to the Romantic imagination: Lucrezia Donati, legendary mistress of Lorenzo de’ Medici, Ginevra de’ Benci (now identified as Giovanna Tornabuoni), the pious Piccarda Donati, forced to abandon her convent and marry a political ally of her brother, Luisa (or Aloysia) Strozzi, the subject of a popular novel published in 1835, and Beatrice Portinari, the love and muse of Dante Alighieri. Most of these ‘portraits’ were publicly exhibited under the sculptor’s name, so clearly they were not intended to be sold as Renaissance works.

In evoking historical characters, including Benivieni, Savonarola, Marsilio Ficino and Dante, Bastianini sometimes based them on known prototypes. Dante, for example, is based on the 14th-century fresco that had recently been discovered in Palazzo del Pretorio (the Bargello), and Savonarola resembles well-known images of the fiery friar. Other depictions are imaginative recreations: Benivieni was based on a 19th-century engraved portrait and on a local tobacco factory worker whose physiognomy resembled that in the engraving. Whatever the source, most of Bastianini’s historicizing busts share characteristics seen in authentic Renaissance portraits: whereas the females are young and idealized, the males are veristic, with sagging flesh and wrinkles. This contrast—realistic vs. idealized—reflects distinctions found in authentic Renaissance sculptures in which male portraits are consistently realistic and mature while females are shown of child-bearing age and with idealized features (consistent with contemporary, fifteenth century, Florentine family and civic values).

Bastianini’s sculptures, almost ‘hidden in plain sight’ among the masterpieces of Antonio Canova, Lorenzo Bartolini, Giovanni Duprè, Medardo Rosso and other prominent nineteenth-century artists, are worth seeking out during a visit to Florence’s Galleria d’Arte Moderna. His works appealed to his contemporaries’ desires with great skill and deep empathy, producing images strongly evocative of the Golden Age of Florentine art, the Italian Renaissance.

Anita F. Moskowiz, Professor Emerita at Stony Brook University, has lectured and published widely on Italian Gothic and Renaissance sculpture, and issues of forgery and imitations. She has recently published the book Forging Authenticity: Bastianini and the Neo-Renaissance in Nineteenth-Century Florence, which can be bought on Amazon. Moskowitz has also been the recipient of a fellowship at The Harvard Center for Renaissance Studies in Florence, Villa I Tatti.