In the summer months, Florence often hosts open-air cinema events showcasing an international array of stars of the screen—under the stars. In some cases, the piazzas in which the events are held are themselves featured in the films. Indeed, over the past four decades, the city’s appearance on the big screen made a star of Florence—a role the city continues to play (see theflr.net/tuscanyonfilm).

One of Florence’s most memorable starring roles was in James Ivory’s 1985 adaptation of E.M. Forster’s 1908 novel A Room with a View, which follows Lucy Honeychurch, a young British woman, through a visit to Florence and, subsequently, her reaction to the eventful visit. Lucy’s journey begins and ends with a view of the Arno from that eponymous window, and whilst the scene has stayed the same, the viewer has been profoundly changed. The camera rushes through the streets of Florence, pausing occasionally on a statue or a muddied face, as the characters become entangled in the city’s charm. Florence becomes a kaleidoscope through which Lucy’s juvenile self refracts and shifts into womanhood, its luminosity radiating through her English heart. The lens moves from Santa Croce to piazza Signoria, where it focuses on the harsh faces of the Giambologna and Cellini statues as well as the panic-stricken eyes of the dying man in that same square. Later on, we are transported to the rolling hills of Fiesole, the setting of the dramatic kiss that shakes up Lucy’s ordered life. The claustrophobia of the city melts away into an archaic idyll of olive grows and violets, and with it English sensibility is lost to impulse.

Florence also takes centre stage in Franco Zeffirelli’s 1999 Tea with Mussolini,a love letter that refuses to end at the credits. The semi-autobiographical film recounts Zeffirelli’s informal adoption by a group of English women, expats nicknamed ‘I Scorpioni’ because, as pointed out in hushed tones by an acquaintance, ‘they bite’ (see theflr.net/scorpioni). The plot follows the women and, more importantly, their beloved Florence through the rise of Mussolini and into the beginnings of World War II, during which both characters and city remain defiant against change. As eccentric artist Arabella points out, describing the ways the beauty of the city have given them passion, ‘I have warmed both hands on the fires of Botticelli and Michelangelo.’

In Tea with Mussolini,the camera indulges in the city’s beauty, the wide lens pushing its way urgently through bustling streets, desperate to take in everything in view. In the Uffizi Gallery, where the Scorpioni take afternoon tea amongst the masterpieces, the flamboyant Arabella says with enraptured sigh, ‘Florence isn’t just shiny cars and ice creams as little boys think. It’s the human form divine.’ Her words ring in the viewer’s head as the streets of Florence soon become parading ground for marching fascists, and the walls fill up with skull-emblazoned banners. However, whilst the city’s exterior changes, the minds of its English visitors remain resolutely the same; Mussolini cannot interrupt tea and gossip.

Whilst so many artists seek to capture Florence’s romance, the city also contemplates a darker personality, an alter ego that comes out only out at night. Ridley Scott’s 2001 Hannibal throws the city into this gloomier light not often seen by the snap-happy travellers flocking to capture the sunset over the Ponte Vecchio. In Hannibal, we are instead trapped in Florence’s echoing cloisters and looming bell-towers. The Palazzo Vecchio becomes the setting of a gruesome murder; the place rings with the unforgettable line, ‘Bowels in or bowels out?’

The Porcellino fountain, often the scene of well-orchestrated photo-shoots of tourists caressing the boar’s nose, becomes the place where Doctor Lecter stabs the gypsy Enrico Loverso, whose blood then trickles into the fountain’s water. Scott’s choice to set his film in Florence is an interesting one, highlighting the American tradition that perceives Europe as a place of moral decadence. The labyrinthine alleyways and archaic depictions of death and destruction wherever the eye looks inspire an impulsiveness and morbidity in Lecter. The imposing presence of Dante is a catalyst for violence, not admiration; Lecter reads Inferno almost as a guidebook, taking its idea of punishment (especially by hanging) perhaps a bit too literally.

Years before Scott’s infamous cannibal made the city his home, Brian De Palma used Florence as the ominous setting for his 1976 psychological thriller Obsession. The film opens onto a looming basilica of San Miniato, rising intimidatingly at the top of the steps in the misty grey light. The church, perpetually shrouded in fog and seen only from its front, with a hazy Florence lying in its shadow, plays an important role: it is the site of the first meeting between Michael Courtland and his wife’s lookalike, both faces obscured by shadow and held alongside peering, archaic profiles from the church’s frescoes. In fact, De Palma’s Florence is often blurred, partly seen through an alleyway or constricted by towering walls. The city is deconstructed to create a sense of psychological disturbance; we don’t know where we are— both in the city and in the story. Even out on Ponte Santa Trinita, the lens feels trapped, as it flits disconcertingly between the dark silhouettes of Michael and Sandra moving slowly towards each other.

Henry James, whose novel Portrait of a Lady is set in Florence (and filmed there by Jane Campion), said that ‘everything about Florence seems to be coloured with a mild violet, like diluted wine,’ which is perhaps why it intoxicates all who visit and why film directors seek to capture its beauty and intrigue. 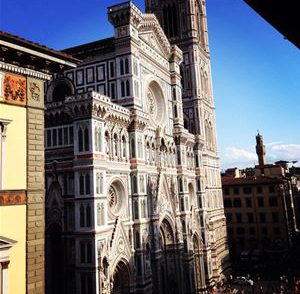 ‘Every city, let me teach you, has its own smell!’ So says the eccentric Miss Lavish in E.M. Forster’s A Room with a View, a tale of the effect of ... 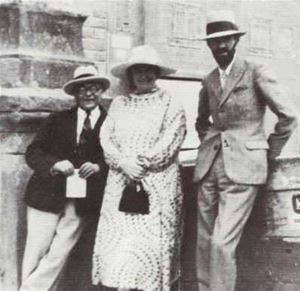 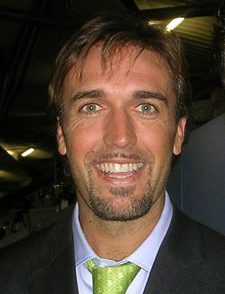