A fresco tour of Florence

Visitors to Florence intent on learning something about the city’s paintings face a staggering number of options. The Uffizi Gallery, the most comprehensive tribute to Italian panel painting in the world, is on everyone’s ‘must-see’ list. The city’s other major museums

Visitors to Florence intent on learning something about the city’s paintings face a staggering number of options. The Uffizi Gallery, the most comprehensive tribute to Italian panel painting in the world, is on everyone’s ‘must-see’ list. The city’s other major museums devoted to painting, the Accademia and the Pitti Palace, cover the Middle Ages and the High Renaissance, respectively. But these collections tell only part of the story of Florentine painting. A magnificent array of frescoes decorate the city’s churches, cloisters and palazzi, and they make a singular contribution to Western art. Many are also free to visit!

Fresco painting in Florence began in the Church of Santa Croce around 1315, when Giotto discovered how to endow the human figure with a semblance of three-dimensional bulk, to plant its feet firmly on the ground, and to make it move within a space that makes sense. Simply put, Giotto, for the first time since the art of ancient Rome, set down the principals for rendering the visible world.

In nearby chapels, Giotto’s followers probed a different pictorial world. In place of his sober earth colors, these artists employed a flashier palette. They also abandoned the true proportions of the human form in favor of fancifully slim and elongated characters. By rejecting Giotto’s naturalistic features, these artists experimented with an increasingly decorative art that came to define Gothic painting.

When the plague struck in 1348, killing over half the citizens of Florence, commissions for works of art ceased, and when they started up again, it was with a different style. In the Strozzi Chapel at Santa Maria Novella, Andrea and Nardo di Cione composed scenes from the Last Judgment in a severe, anti-naturalistic style that is thought to reflect the period’s morbid preoccupation with death and afterlife. Structurally and dogmatically, the painting is inspired by Dante’s Inferno, written early in the century.

Head over to the church’s ‘Green cloister’ to see the Spanish Chapel, formerly the convent’s chapter house. The frescoes that cover the walls and ceilings of this low, vaulted room, painted about 10 years after the Cione brothers’ chapel, are more lively, yet reflect a Dominican dogmatism represented in an orderly and non-naturalistic style.

To see the dawn of Renaissance painting, go across the Arno to the Brancacci Chapel. Here in the mid-1420s, Masaccio painted scenes that revitalized Giotto’s entire pictorial language by giving a new dignity to the human condition—all before his death at 26. Suddenly naturalism became an essential part of painting—we see what are likely to be the first shadows in Renaissance art. By rendering the lame, the dispossessed and the poor on the streets of Florence, Masaccio was the first artist to document the inherent conflicts in a society steeped in wealth.

High Chapel Back in the Basilica of Santa Maria

Novella, you meet a whole gallery of lifelike portraits of Tornabuoni women in Domenico Ghirlandaio’s Birth of the Virgin (late Renaissance, 1494) in the high chapel that he painted with the help of his workshop. Standing stiffly in pride of place in a detailed contemporary bedchamber, this group represents the finest of the genre in the fifteenth century. While much appreciated by late 15th-century patrons who liked to see their own image and wealth reflected in art, Ghirlandaio’s one-time student, Michelangelo, would break from this kind of art, refusing to paint portraits because no face was worthy of one.

The basilica of San Lorenzo houses Bronzino’s poignant testimony to the end of an era. His towering late Mannerist fresco, Martyrdom of Saint Lawrence (1569), while overtly religious in pretext only, pays homage to Michelangelo’s lifelong obsession with the male nude in torment. When Bronzino died a few years later, Florentine fresco ceased to play a central role on the world stage.

Strangely, the atrium of the basilica of Santissima Annunziata barely rates a mention in guide books. For the seven years (1509–16) it took for artists to fresco its walls, the church stood as the city’s hothouse of creativity. The frescoes of one of the painters, Andrea del Sarto, represent the clearest opening in Florence towards understanding the critical role of color in the High Renaissance. His great masterpiece, Birth of the Virgin, is as suave an aesthetic triumph as would ever be painted in Italy. Here, too, you will find Sarto’s brilliant and obstreperous young pupils, Pontormo and Rosso, artists whose contributions would mark the decisive step to the highly artificial style known as Mannerism.

Since his first trip to Florence in 1987, Richard Peterson, who trained at the University of California, Berkeley, has immersed himself in the study of Florentine art. In 2002, at the urging of friends and scholars inspired by his passion and insight, he ended his longtime medical career to concentrate on writing about Italian art. He now divides his time between Berkeley and Florence, and is currently at work on a book on Roman art. 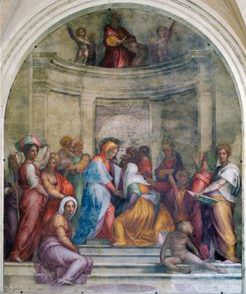 The frescoes of the Basilica of Santissima Annunziata

Of all the many churches and cloisters in Florence that house frescoes, the atrium of Santissima Annunziata, home of the Servites, must be counted as one of the most accessible. But what is particularly striking about a site just up the street from the Duomo is the almost complete absence