When you dine out in trattorias there are always a few desserts on the menu for special occasions: zuccotto, zuppa inglese and millefoglie. The oldest of these is zuccotto, which has many connections to the Renaissance. This liqueur-soaked dessert is made of sponge cake and, in its classic semifreddo

When you dine out in trattorias there are always a few desserts on the menu for special occasions: zuccotto, zuppa inglese and millefoglie. The oldest of these is zuccotto, which has many connections to the Renaissance. This liqueur-soaked dessert is made of sponge cake and, in its classic semifreddo version, sheep’s milk ricotta and Italian whipped meringue with chocolate chips and candied fruit. As with most recipes, there are as many versions of zuccotto as there are cooks. There are versions made in gelato shops and a different version in pastry shops, and a simple home version, the recipe for which I share here.

According to the Gelatieri Artigiani Fiorentini, the original name of the dessert was the elmo di Caterina, after Caterina de’ Medici. Elmo means ‘helmet,’ and a small helmet with little spikes was called the zuccotto. Zucca is often used in reference to one’s head or skull, as in ‘Use your zucca.’

The shape of zuccotto reminds me less of a helmet and more of Brunelleschi’s dome on Florence’s Duomo. The dessert is made by layering strips of sponge cake in a bowl, adding the filling (whipped cream or the classic ricotta and Italian whipped meringue), chocolate chips and candied fruit, and then soaking the cake with liqueur to make it moist. My favorite version has a layer with ricotta and chocolate chip and a chocolate center with candied orange or Amarena cherries.

The traditional soak for the sponge cake is a sugar syrup made from a local liquor, Alchermes, which is available at the famous Santa Maria Novella pharmacy in via della Scala. Alchermes, whose bright red color comes from cochineal, a small South American insect used, among other things, to dye cloth in the Renaissance, is also an ingredient in schiaccia briaca (see theflr.net/schiacciabriaca), zuppa inglese and pesche di Prato, a small pastry that looks like a peach.

What lies inside the dome also dates back to the Renaissance. Buontalenti, architect to the Medici family, brought ice down from the mountains in Abetone, near Pistoia, and kept it in a specially made pyramid in the Cascine park (see theflr.net/cascinepyramid). The ice was used to chill custard, and adding whipped cream and freezing created the luscious mix used in the semifreddo version of zuccotto.

Note: The classic filling of sheep’s milk ricotta with Italian meringue and chopped chocolate and candied fruit can be also purchased.

Sponge cake: Place the eggs in a bowl with the 100 g of sugar and beat until thick. (Doing this over a pot of hot water will warm the mixture and help make it very light.) Then fold in the flour, a little at a time. Butter and flour a 20cm round pan. (For easier removal, cut a disk of baking paper and line the bottom of the pan.)

Filling: Whip the 500 g of ricotta with 100 g granulated sugar. Whip the 250 ml of heavy cream. Divide into two equal parts. Chop the bittersweet chocolate pieces and add to one part of the filling mixture; mince the candied orange rind, along with 2 tbs cocoa powder, mix into the other part of the filling. Line a bowl with plastic wrap. Slice the sponge cake to fit the bowl, both to line the bottom and sides and to cover the top after the filling has been added. (Some people like to cut the sponge cake into two disks and then the disks into wedges. I usually cut into strips, cutting one large one across the middle and then the others to fit.)

Liqueur soak: Boil 125 ml of water and mix with 100g of granulated sugar and stir until melted. Add the Alchermes (the traditional choice, but Grand Marnier or Strega are also good, although they add no color). Reserving enough liquid for the final layer of cake and a last brush over the top just before serving, brush the mixture onto the slices and let soak in.

Assembling the zuccotto: Add the white filling with chocolate pieces first, shaping it to the bowl, leaving the center empty. Next, fill the center with other mixture (with cocoa and candied orange). Add the final layer of sponge cake slices and brush on the soaking liquid and let soak in. Cover with plastic wrap and put in the freezer for 6 hours. Remove 20 minutes before serving. If you like, brush with more of the syrup or dust with powdered sugar just before serving. Cut into wedges with a sharp knife and serve. 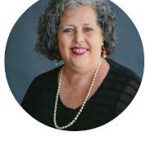 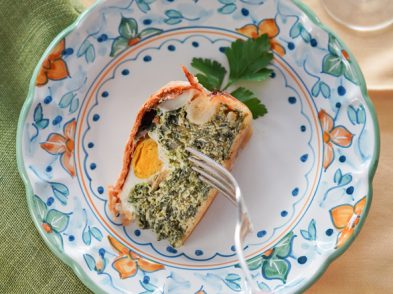 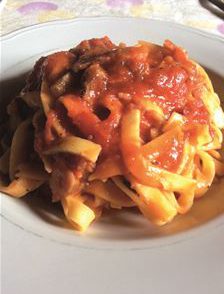 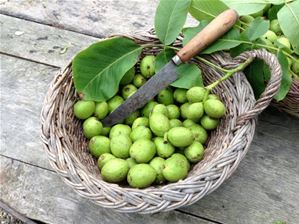