Well known for being tricky, rife with double meanings and open to various interpretations, the Italian language never ceases to surprise and delight me. What do Michelangelo’s 20 seated nudes, young men in various poses, painted on the ceiling of the Sistine Chapel and my gnocchi dish have in common?

Ignudi was a term used by Michelangelo for the nude males he incorporated in his frescoes in what became the Vatican City’s most popular visitor attraction. It is also the term given to a primo piatto made by using the ripieno, the filling for pasta, but without the pasta. Therefore it is nude.

Now that I know where the name comes from, whenever I tip my head up in the Sistine Chapel, gazing at those 20 nude men, I shall forever be thinking of gnocchi!

A simple dish found in household kitchens in the areas of Siena and Grosseto, it is tastier than it may sound.

Pick the spinach leaves, discarding the stalks, wash well in cold water and leave to drain. Peel the garlic clove, chop to a fine dice.

Heat up a heavy-based pan, add the olive oil and sauté the garlic. As soon as the garlic begins to colour, throw in the spinach leaves and toss. There should be enough moisture from washing to allow them to wilt. Cover the pan, wait three minutes, stir again and turn off the heat. Cool the leaves down, wring out any excess moisture and chop into small pieces.

In a clean bowl, mix the ricotta with the spinach. Add the eggs, flour and seasonings. Lastly, mix in the grated parmesan. Some of the colour should leach out of the spinach, giving a nice green tinge to the mix. The mixture should be soft, while at the same time holding together.

To test if you have the right consistency and seasoning, take some of the mixture (about the size of half a golf ball) into the palm of your hand, roll it into a ball with a bit of semolina flour, then roll lengthways to resemble a short, fat cigar. Place in a pot of boiling salted water and cook until your nude filling rises to the surface, about two or three minutes. Remove from the water with a slotted spoon and taste. It should be springy to the touch, and tasty. If it doesn’t hold together, add a little more each of flour and grated parmesan.

Continue rolling the mixture out in the semolina flour, then let your gnocchi rest in the fridge for a couple of hours, allowing them to relax and dry out a little.

Cook in lots of boiling salted water. Meanwhile, in a separate pan, melt the butter and add the sage leaves, browning both the butter and the leaves lightly. When the gnudi float to the surface of the boiling water, remove with a slotted spoon, drain and then toss in the browned butter. Serve with lashings of grated Parmesan. 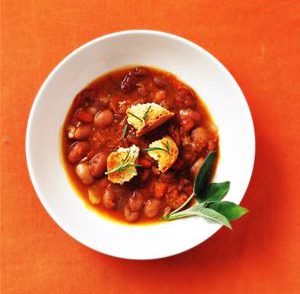 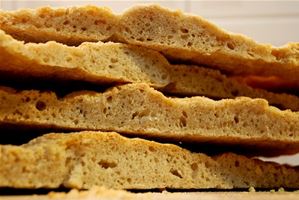 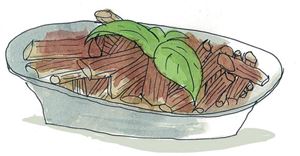