In the outskirts of Florence not far from the throngs of tourists in the historic center, amid the fields flanking the highway to Pisa, lies the neighborhood of San Bartolo a Cintoia, a hushed and cozy borgo where tall buildings line the antique streets like protective giants warding off invading

In the outskirts of Florence not far from the throngs of tourists in the historic center, amid the fields flanking the highway to Pisa, lies the neighborhood of San Bartolo a Cintoia, a hushed and cozy borgo where tall buildings line the antique streets like protective giants warding off invading urban sprawl. Next to the massive and remodeled Casa del Popolo (community building) is the tiny red Teatro del Borgo, a unique little gem of a theatre, built in the 1930s, which seats just 100 people.

The town’s elderly residents remember the theater as a base for the fascist party during WWII, and in more peaceful times, a furniture restorer made it his workspace, with the stage as his home. Just last year, after a restoration, the theatre returned to its original purpose: hosting traditional and improvisational theatre groups, musicians of all genres (classical, choruses, Italian folk songs, blues, jazz, country and amateurs during open mic events) and a weekly film series, as well as theatre and dance classes. The small house is sometimes packed, but many, if not most, of the audience members are not from the immediate neighborhood.

Indeed, two worlds of Florence can be seen at the space between the theatre’s threshold and that of its neighbor, the Casa del Popolo. At the Casa del Popolo, an authentic representation of Florentines congregates: families, soccer fans, young couples, immigrants, the unemployed, factory workers andcarpenters. Groups of elderly men shout over a card game. A young crowd hanging out drinking beers, displays a variety of ethnically different faces. Many seem unsure about what’s going on in the little red building that attracts people from outside their borgo. The theatre audience will go into the Casa del Popolo to get refreshments at the bar or eat in the pizzeria, but for the most part the locals only peek into the theatre, stare curiously at the posters outside the theatre’s door, hesitant togo in. As elsewhere in the region and across Italy, there is an abundance of cultural activities right next door, but life’s everyday struggles are more often eased with more familiar forms of entertainment, such as time in the Casa del Popolo, television and computer games.

Meanwhile, in less than a year since its reopening, the little Teatro del Borgo has attracted more than 1,000 members from all over the Florence area. Membership starts with first ticket purchase (10 euro); from then on, members are entitled to discounted tickets to all events—and sometimes free admission—which feature some of the most surprising talents in Tuscany and beyond. The theatre throws periodic fund-raisers: apericene hosted by the pizzeria or ‘potluck’ style, with the members and other volunteers offering memorable homemade Tuscan delicacies accompanied by beer and wine.

‘What the theatre commission is struggling to do,’ says Simone Bellucci, the theatre’s artistic director, ‘is to break that barrier and get the neighborhood to participate and go to the theatre’s events along with people coming from the outside.’ With its volunteers and accessible ticket prices, the Teatro del Borgo is making a full-fledged effort to get their surrounding population to cross that threshold. As Bellucci says,the locals may find entertainment and a different reality that could be an enrichment through the theatre’s myriad shows and concerts, as well as an array of various afternoon classes and activities. ‘Slowly but surely, with the help of the Casa del Popolo, we are breaking that barrier to intertwine those within the walls of our surrounding neighborhood with the theatre’s quality events.’

via San Bartolo a Cintoia 97, Firenze 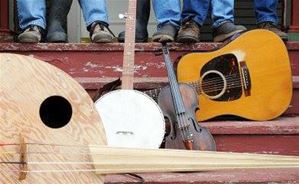 From fiddle to folk house

A few years ago, I took out a violin I had bought for five dollars at a garage sale back when I lived in the Midwest and brought it over to Italy—hoping I would eventually learn how to play it. After a few lessons with Florentine Vieri