This week, Florence celebrates one of the most beloved artists of all time, Michelangelo Buonarroti, with the first-ever Michelangiolesca festival, a series of free events and concerts from July 14–19, around the city but concentrated on piazza San Lorenzo. The events are curated by art historian Sergio

This week, Florence celebrates one of the most beloved artists of all time, Michelangelo Buonarroti, with the first-ever Michelangiolesca festival, a series of free events and concerts from July 14–19, around the city but concentrated on piazza San Lorenzo. The events are curated by art historian Sergio Risaliti.

The clearest symbol of the festivities is a five-meter high marble block called Il Gigante placed in Piazza della Signoria. The block is intended as a visual comparison to Michelangelo’s great David (often called Gigante, even while he was making it) and is the same size as the block that Agostino di Duccio had quarried in Carrara for this sculpture. The block has just the hand of the David sculpted out. It is the work of Studi d’Arte Cave Michelangelo and it is intended to remind viewers of the long history and process that went into the creation of the famous sculpture (a story that you can read in the book “From Marble to Flesh” by Victor Coonin).

The festivities kick off July 14 at 6pm with a street performance and parade from piazza Santa Croce to piazza San Lorenzo. Watch an ox wagon wind its way through downtown, trailed by calcio storico players and a group reading excerpts from Ascanio Condivi’s Life of Michelangelo. At 7pm in front of the Basilica of San Lorenzo, the D.C. Boys Choir will perform, directed by Eleanor Stewart.

See video projections on the façade of the church starting at 8.30pm and running through the evening until late every night during the festival. Designed by ARTMEDIA Studio, the animated projections give an idea of what San Lorenzo might have looked like if Michelangelo had finished the project for which he was commissioned by Pope Leo X and on which he worked from 1515 to 1519. He abandoned it to work on the Medici Chapels because the same patron felt the need to focus on plans for after his death. Other works by the great master will also be projected.

The projections continue to run during concerts and roundtable discussions programmed all week on the steps of San Lorenzo. The opening night features a roundtable discussion on creativity between Oliviero Toscani, Giacomo Marramao and Paolo Crepet (in Italian), and a concert of Bach concertos. The evening will conclude with the presentation of the Cave Michelangelo prize in several different disciplines: painting, sculpture, architecture, poetry and art history.

Celebrations continue until July 19. One of the highlights will be at 10pm on July 16, when open-air performance ‘Poetry and Music for Michelangelo on the Arno’ takes place between Ponte Vecchio and Ponte Santa Trinita. The debate (in Italian) on July 18 between great architects Mario Botta, Marco Casamonti and Massimiliano Fuksas on the steps of San Lorenzo also promises to be interesting.

As part of the project, a Camper will be driving around the city to talk to people about art history! Find it in the unlikely locations of Gavinana, Galluzzo or Peretola, organized by Muse.e. Also, head into the Mercato Centrale to see a gigantic tattooed David by Luciano Massari and his students.

Courtney Runn grew up in Texas but learned to love Italy as a second home after spending all of middle school and most of high school in Florence. She is currently studying journalism and Italian at the University of Texas in Austin. You can find her exploring the city with her camera in hand and a book in her purse.

Best known for its collection of sculptures and artifacts dating back to the 1200s, the Bargello Museum is going in a new direction this summer with an unprecedented contemporary exhibition, displaying the work of late artist Adi Da Samraj. Titled The Ascent of Orpheus: Between and Beyond Representation and 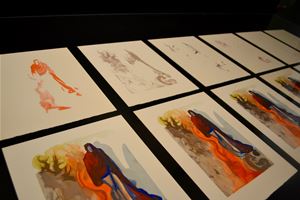 Medieval poetry gets a Surrealist makeover in #DalíMeetsDante, the newest exhibition at Palazzo Medici Riccardi. The exhibition features a set of 100 illustrations by Salvador Dalí detailing Dante’s journey through inferno, purgatorio and paradiso as described in his Divine Comedy.   #Dalí 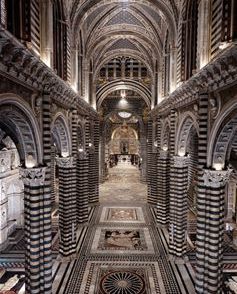 Editor's Note: Following a Ferragosto break, Siena Cathedral's floors will be opened to visitors again beginning August 18.   In celebration of Expo Milano 2015, Siena will open some of its rarely seen treasures for the duration of the summer: the floors of the Duomo di Siena.