From sexy (or not) lingerie to wall paint and diets, white in Italian language is much more omnipresent than it is in English!

From sexy (or not) lingerie to wall paint and diets, Italians seem to use the word bianco (‘white’) much more than we Anglos do. It’s enough to make your hair turn white.

“In Bianco” illustration by Leo Cardini

As many things do in this office, it began with pants. Or underwear, as we non-Brit-Anglos say. When Sandro mentioned a friend’s store that sold biancheria, and I rejoined that I could use some, meaning bed linens. The look that ensued made it clear: this was not biancheria da casa but biancheria intima, which literally means ‘intimate linens,’ i.e. ‘sexy lingerie’.

Where did the word come from? Was this biancheria initially all white? It was. Underlayers, like bedding, were colour-free in the olden days: why waste good dye on something that wouldn’t be seen? As in the United States, where ‘white sale’ still means discounts on bedding, this linguistic vestige remains in Italian despite the fact that in recent years Italians go not only for sheets with gigantic cute animals printed on them but also for decidedly unintimate pajama sets featuring oversized teddy bears on pink and grey backgrounds.

This initial ‘white’ confusion got me thinking about how many other Italian terms involve bianco. There are enough to make your hair turn grey trying to figure it out—which, in Italian, of course, turns white.

For example, as newlyweds, we purchased a rather dark ground-floor apartment, so I called the imbianchino and gave him a big jug of bright yellow paint for the walls. I don’t know if you’ve ever noticed, but just about every Italian home has white walls, perhaps because imbianchino literally means ‘whitener,’ a holdover from the days when masonry walls were whitewashed with a mixture that included lime. The look he gave me was basically saying ‘do I look like an ingiallino to you?’ I may as well have been standing there in my biancheria intima.

Another wonderful expression of Italian culture comes with mangiare in bianco. The perfectly logical way to recover after stomach troubles is indeed to eat bland food (rather than solve it all by chugging pink liquid), just that in Italy bland food is apparently mostly white in colour. The first time you hear this expression, it may be confusing, and not just to us foreigners. A family tale—that has been told so many times I can’t recall which Italian uncle is the source—involves a doctor uncle and his small town secretary. The secretary’s husband was diagnosed as overweight with high cholesterol. He was sent home with orders to mangiare in bianco for a month and come back for more tests. The next month his cholesterol was through the roof and he’d gained a few kilos. ‘What did you eat?’ asked the doctor. ‘Well, my wife made me only white food,’ responded the man. ‘You know, pecorino cheese, 4-cheese pasta, fried mozzarella, polenta with cheese…’

With a diet like that, I wouldn’t be surprised if the man were up all night, passando la notte in bianco with indigestion. Sleepless nights are indeed white in Italian, though it has nothing to do with the lights being on—the legitimate historical origin being related to the medieval process of knighthood: the squire would don a white cassock, symbolic of his purity, and be locked in a church to pray all night, thus spending the night literally ‘in white’. I expect the cassock might have looked something like early biancheria intima.

In Italian, the term also provides a nice play on the ‘White Nights’ used for cities’ overnight parties all over the world, which are Notte Bianca in Italy. On some of these nights, there’s also a cena in bianco, a dinner in which everyone wears white, though assumedly they don’t also mangiare in bianco since that’s treatment only for the ill and the very young, hardly something festive. On a more intimate level, all these nocturnal whites echo of mandare in bianco (‘send in white’), which means to cause a male sexual frustration of the sort that English speakers use ‘blue’ to describe.

Italians often say that the English language contains too many compound nouns and verbs, whereby the wrong combination of the right words may lead to a world war, or at least very embarrassing situations. But when it comes to the many shades of white, I’d say that Italian ‘pales’ in comparison. Literally. 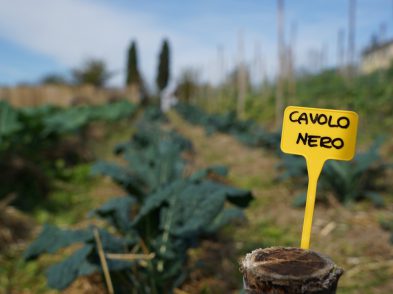 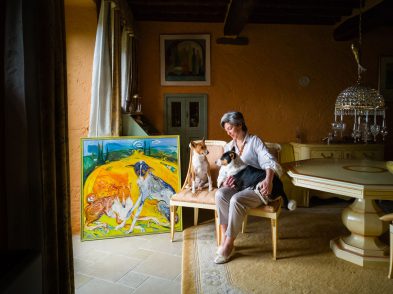 The Lithuanian community in Tuscany celebrates its fourth anniversary in portraits.     Dovilė Bružaitė and Matteo Baldini met in piazza Santa Maria Novella in 2009. She, a tourist ...