Darkness descends on the Tuscan landscape as weary farmers make their way home, ever mindful of dangers both real and imaginary. Ahead, the light from a farmhouse window pierces the dark, a beacon promising warmth, rejuvenation, safety. Inside, young women rekindle the fire while their mother oversees the evening meal. After supper, the fire now blazing, a few guests arrive—an eager suitor, a widowed uncle, perhaps a neighboring farmer—as grandparents, parents and children gather close. After some playful prompting, someone begins to tell a story: ‘Once upon a time…’

This is the ancient custom known as the veglia. Observed for centuries among Tuscany’s rural farming communities, the veglia was the principal social event among those who until only very recently formed the working majority of Italy’s sharecropping system, the mezzadria. At the center of this agrarian world were the podere (small farm) and farmhouse. Inside the house, the fireplace and its hearth were central to this ritual—one not by coincidence practiced during the darkest time of the year. From roughly the close of harvest season to the end of Carnival, families and guests would gather in the evening three or so times a week.

The veglia was a time for tales, songs, riddles, courting and even the occasional business deal. Concluding the day’s work and preparing for the next were also part of the ritual. Those gathered around the fire might conduct business with neighbors or mend clothes. They also prepared food for later use, peeling potatoes, shucking corn, shelling chestnuts (see recipe at the bottom of this article).

At first glance, the veglia might seem merely a way to pass the long winter nights in an age of candlelight and illiteracy. As its name suggests, however, the veglia—related to vigilia (‘vigil,’ or state of being awake)—resembles the wake, the funereal act of keeping watch, in both its literal and otherworldly ‘watching’ as well as in acts of merrymaking.

But the practice had deeper purposes. In his comprehensive study, Folklore by the Fireside: Text and Context of the Tuscan Veglia, anthropologist Alessandro Falassi explains the meaning of the ritual’s structure: four segments that mirror the family structure and explore age-specific themes and concerns. Through its convivial and entertaining form, the veglia achieves its primary function of teaching, promoting, and affirming of the social values of the group. 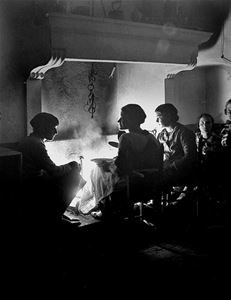 As Falassi explains, the veglia opened with fairy tales for the youngest children, formulaic stories illustrating appropriate behavior and accepted ways of responding to life’s difficult, even taboo, situations. Usually supernatural or magical, these stories also introduced children to communal expectations, such as marriage.

Next came riddles, games, songs, and the like, some instructional. Lullabies were sung for the small children being put to bed.

The courtship-related phase followed, a socially-sanctioned time for young unmarrieds to be together, with songs and stories about courtship (both happy and ill-fated) that frequently emphasized the importance of marrying within one’s group (a fisherman’s daughter does not marry a shepherd, for instance). Courtship acts also took place during the veglia at this point—from proposals to announcements of engagements, even break-ups.

The final phase of the evening focused on marriage and married life, its joys and tribulations, with songs, stories and the occasional bit of gossip affirming the social value of marriage and family. When the veglia ended, the fire would be left to rest for the night, to be revived in the morning.

Falassi notes that the veglia was the antithesis of the social realm of the tavern, where ‘card games, blasphemy, and political, obscene, and misogynous songs demonstrated male hostility toward traditional courtship and family patterns’—behavior interpreted as both a protest against the predominant social unit of the time and evidence of its strength and stability. The veglia, on the other hand, was a testament to the safety and protection afforded by the family and its collective values, embodied contextually in the light and warmth of fire.

Chestnuts, arguably the most prized and abundant of the Mugello’s agricultural products, were the preferred snack during the veglia in this area of Tuscany. Roasted over the ready fire, naturally, they were called ‘le bruciate.’ Folklorist Tebaldo Lorini tells us that any leftover roasted chestnuts would be tossed in with the ribollita the following day. To make this dish, follow your favorite ribollita recipe (or see Rachel’s Ribollita in TF 170) with this addition: Roast chestnuts the night before making the soup. Peel and chop them, then add them to the pot with the bread, beans and vegetables 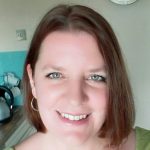 Amy Gulick is a freelance writer based in Florence. Follow her at www.thebittersweetgourmet.com. 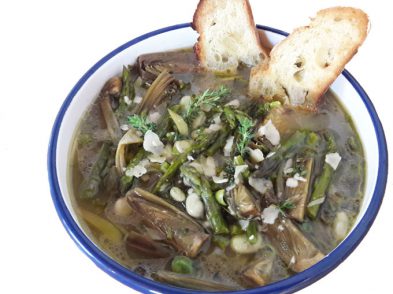 Garmugia is a springtime soup from Lucca, traditionally associated with seasonal transition and renewal, much like a variety of Italian specialty soups at this time of the year. Throughout southern ... 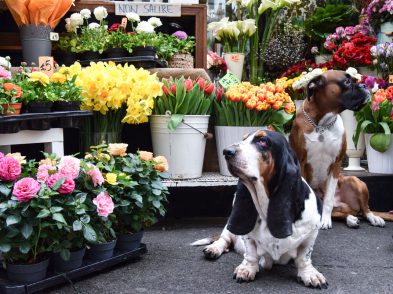 I have been a contented country mouse for the better part of my 15 years in Italy, tucked snugly away in the ultimate sleepy Tuscan village where fresh air, quiet ... 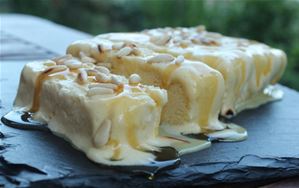 Chestnut orchards cover extensive portions of the Mugello, a vast, lush valley tucked into northeast Tuscany’s Apennine mountains, yielding the chestnuts and chestnut-based products like flour and honey that are ...