9 things to do in the province of Pistoia

There’s a vast part of Tuscany that remains off most tourists’ radars, despite its vast green spaces, profound culture, mountains and thermal baths. The Valdinievole refers to 11 comuni in the south-western part of the province of Pistoia. The Nievole and Pescia rivers flow through this area and converge in the Padule di Fucecchio marsh, a safe haven for numerous species of animals and migrating birds. This spring, we’ve set our sights on this little-known region with a to-do list that should satisfy any type of traveler. 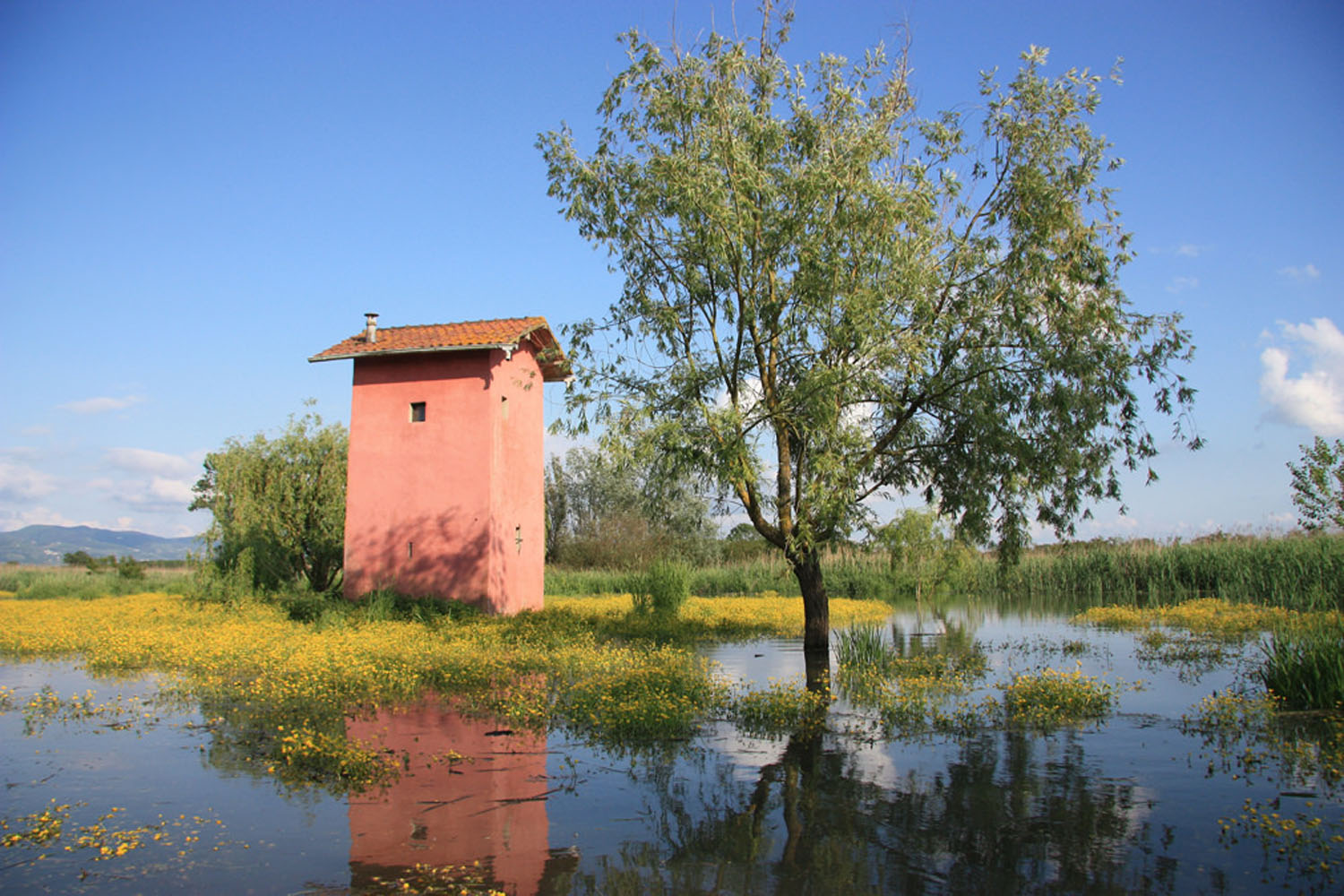 Tuscany, and in particular the Valdinievole, houses the largest inland marsh in all of Italy. The 1800 hectares that now make up the Fucecchio marshes are only a fraction of what they once were, and it’s now a protected nature reserve where you can spot up to 200 species of migratory birds in the winter and spring months. The heron is the most important bird here as it’s a nesting place for them. The marsh is also testimony to the intervention of humans, with the canals and portal system, signs of ancient and important waterways; the Medicean Bridge at Cappiano, a hub of water control and fishing activity; and examples of industrial archaeology. 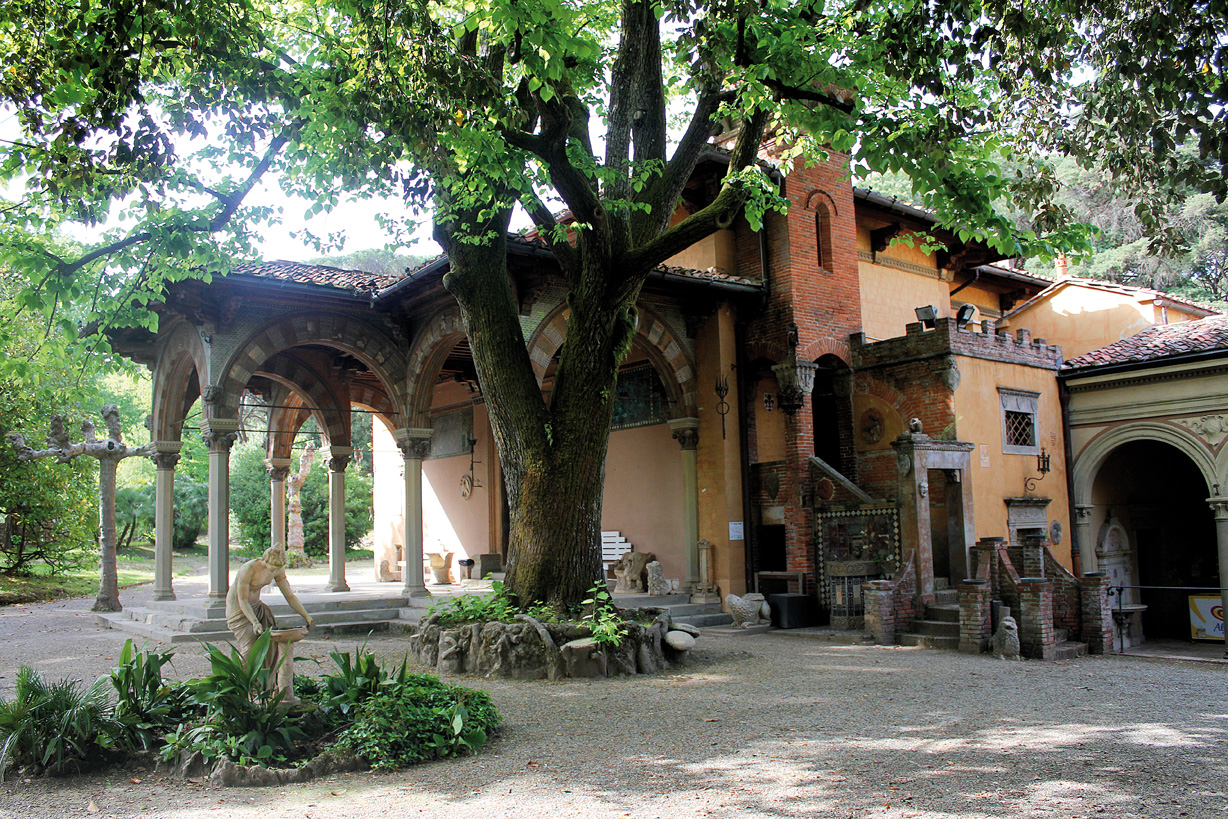 The Terme Tamerici, entirely decorated by the Florentine artist Galileo Chini (1873-1956) in the the Art Nouveau style, looks like a strange witches house in the middle of an enchanted garden. Chini is also responsible for decorations at Montecatini Terme, which are public and rich and rather different than what we find here in a smaller, private structure built for the Schmitz family after a mineral spring was discovered here in 1843. Rebuilt between 1909 and 1911, Chini sought an ideal decorative continuity between the panels, murals, stained glass windows, floors, and surfaces of the architectural elements for a truly over the top experience. 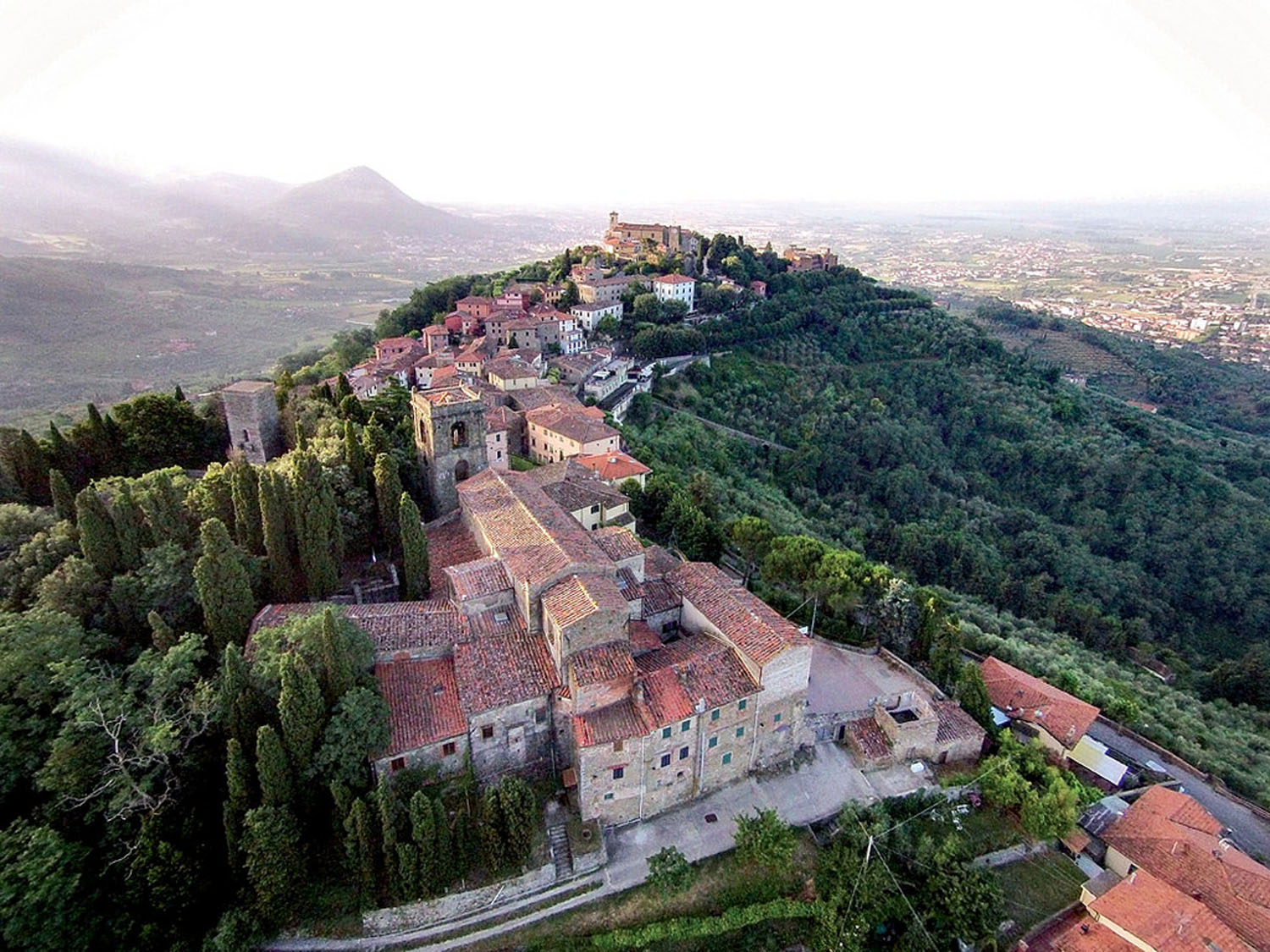 Montecatini Alto in the Svizzera Pesciatina

A place where time seems to stand still, Swiss economist Charles-Leonard Simonde de Sismondi called the ten small villages that climb the Valleriana mountains down to the River Pescia ‘Switzerland in Pescia’. Modernity has yet to arrive to these borghi, linked by a rather torturous road, making them perfect for peaceful exploration on foot. In particular, don’t miss the parish church of SS. Ansano and Tommaso just outside Castelvecchio, a Romaneque building whose original crypt houses well preserved frescoes. 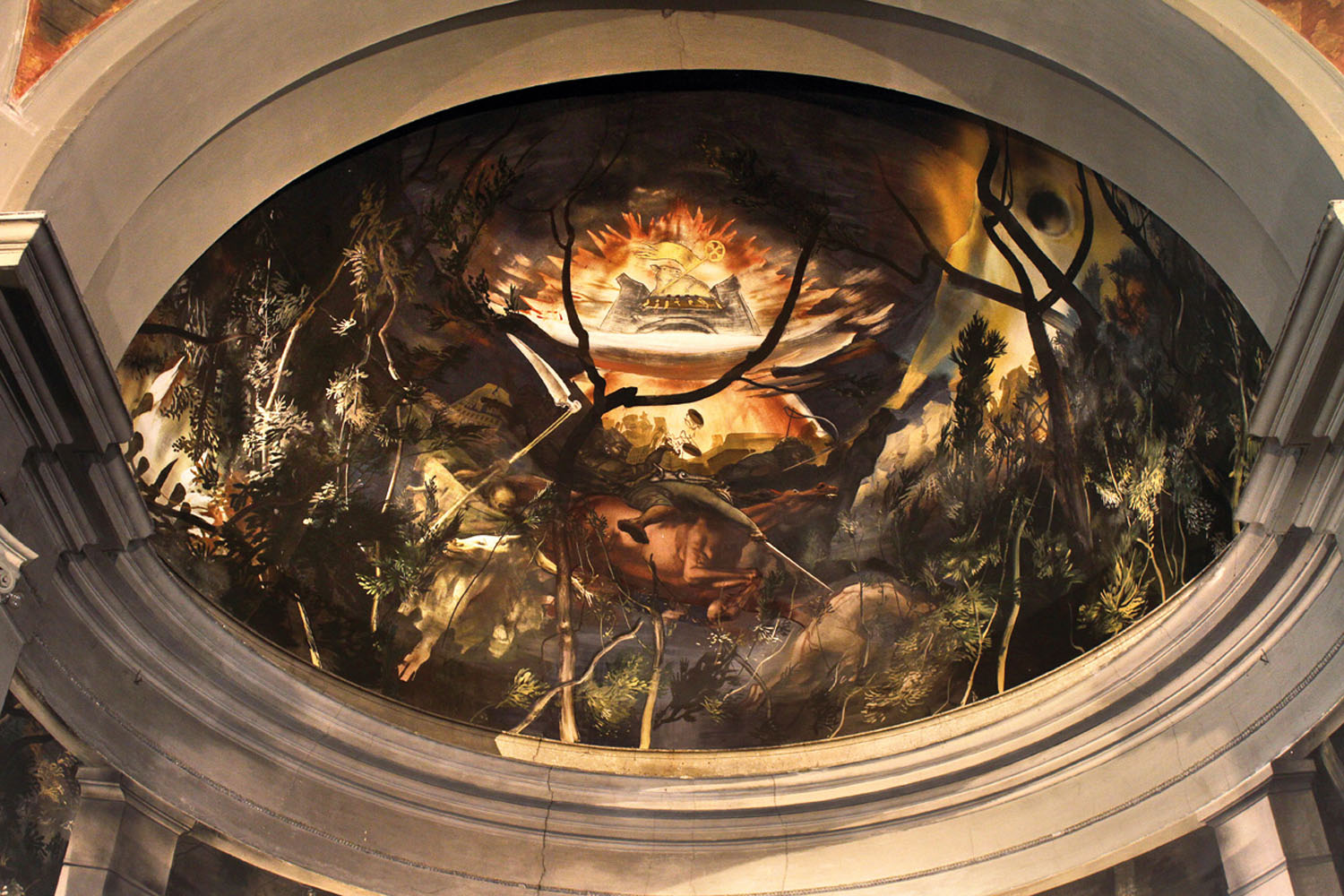 A surprising work of modern art greets visitors to the parish Church of San Michele Arcangelo at Ponte Buggianese. Its 17th-century facade in no way belies the rather apocalyptic scenes frescoed in its apse and side walls by Pietro Annigoni, executed between 1967 and 1984. Descriptions fail these scenes of Deposition and Resurrection, Apocalypse, Last Supper, Pentecost and other stories painted for free by Annigoni and his pupils. Photographic, intense, modern, almost fantastical, with fiery colours and a disturbing combination of realism and abstraction. 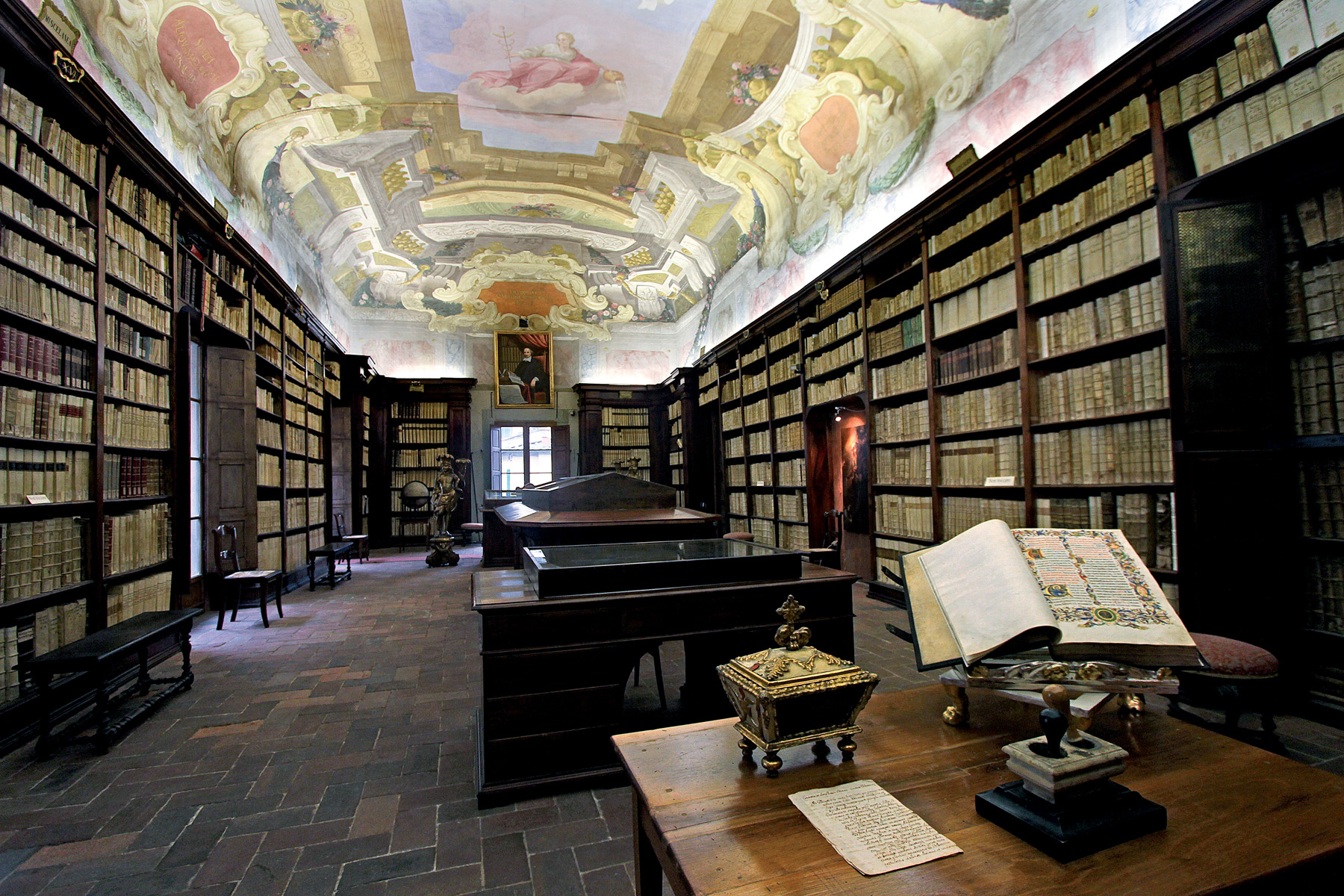 Library geeks will love this 17th-century collection donated by Cardinal Romualdo Cecchi to Pescia’s Duomo in 1648. The beautiful library, with the same Baroque architecture as the city’s Cathedral, was added to by further donations in subsequent centuries. A peaceful place to breathe in culture, though not without a simpatico threat: the Latin warning at the door, extracted from a papal bull of 1666, promises Extrahentes Libros Excommunicantur – excommunication to book thieves. Open Fridays, upon reservation.

Monsummano is a famous thermal destination, but did you know it’s also a medieval hill town? Monsummano Alto is located at about 350 meters above sea level and topped by the remains of a medieval castle and its elliptical medieval walls, although only a small part of these remain. Like many towns in this area, it doesn’t contain ‘must sees’ but is rather a ‘must experience’, a place to wander and discover untouched Tuscany. Down at valley level, Grotta Giusti was established as a luxury thermal resort at the end of the 19th century and has maintained the classy atmosphere and healing waters in its modern 4-star hotel. 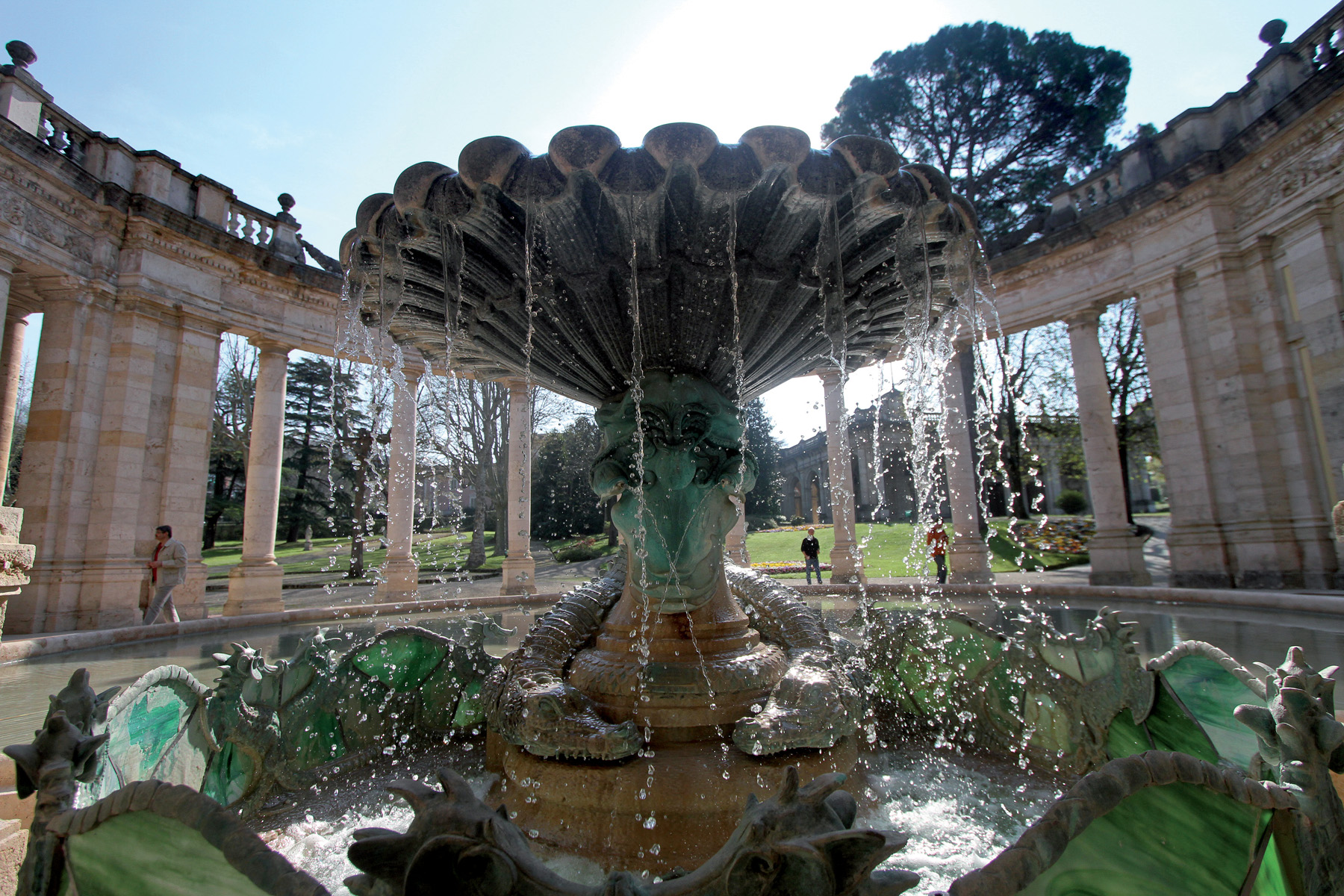 The luxurious Terme of Montecatini

The thermal baths at Montecatini Terme aren’t really off the beaten track but are a central element of the economy and characteristics of the Valdinievole. Testimony to a period of intense creativity and wealth, the amazing Liberty structure still today offers a luxury experience. This is not a spa where you just go to for a dip and a massage, but rather to also enjoy the architectural surroundings and the vast gardens; between hot water and a stroll, you’ll feel immensely more relaxed. 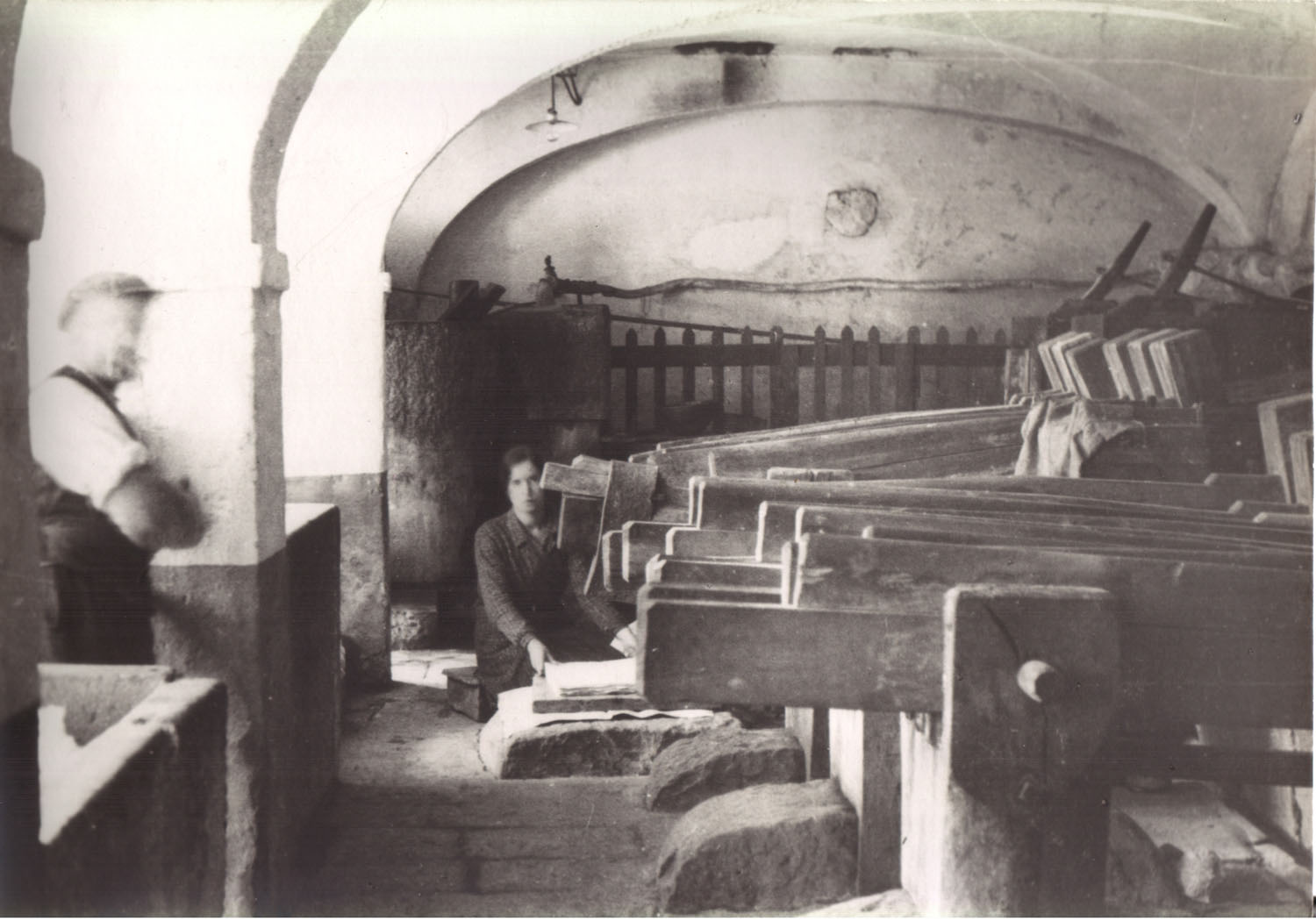 Between Lucca and Pistoia is a ‘Via della Carta’, a path that tells the story of the production of paper in this area. The town of Pietrabuona in Pescia houses a Museo della Carta, an industrial heritage museum with 17th-century machinery for paper making, and a beautiful collection of paper samples, watermarks, stamps and more, as well as a huge archive. It’s also a research center, and often holds interesting didactic workshops. 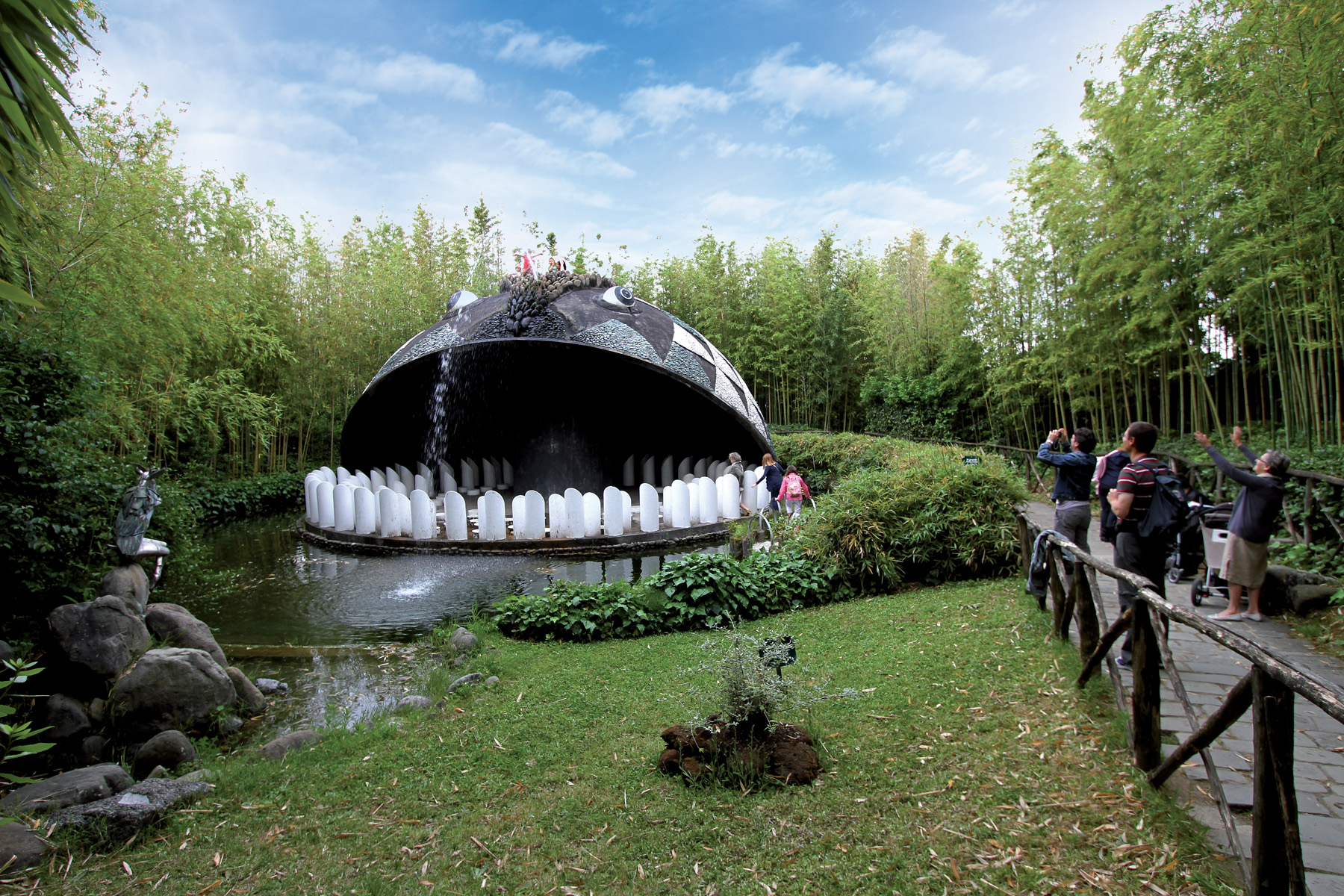 The wooden toy that won the heart of many has his own park in Collodi, the native town of Pinocchio’s author’s mom. While the Parco di Pinocchio and the opportunity to see what is inside the whale’s mouth may attract children of all ages, the annexed fanciful Giardino di Villa Garzoni, is more of an adult attraction, rivaling any of the historic gardens in Tuscany for beauty and creativity. Early spring is the best time to visit, when trees are in flower but crowds haven’t arrived yet.