A short street named for Italian World War I patriot Cesare Battisti runs between two of the most important piazze in Florence, San Marco and Santissima Annunziata. Most of us are too much in a hurry to pay attention to this byway, where two important institutions are located: the monastery of the Servite Order, whose seat is Santissima Annunziata, and the Istituto Geografico Militare, with its long tradition of mapmaking. Nearby is a small doorway along the side wall of the Accademia di Belle Arti. The commemorative plaque above the door is one of the most melancholy in the entire city: “In this studio of the Academy, frugally content with a piece of bread, Giovanni Fattori, a very pure Etruscan creator, drew, engraved and painted, teaching his students and posterity that art is liberty from every new and antique formula.” 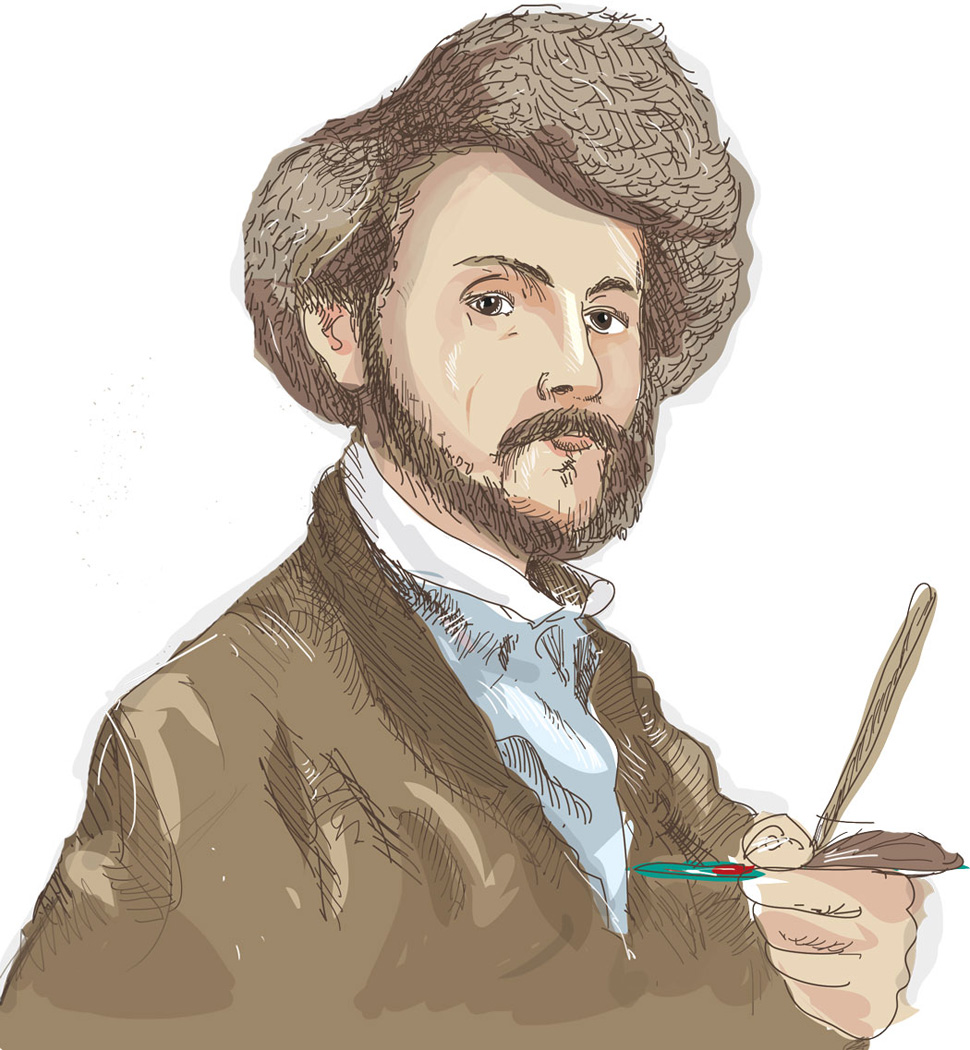 Born the son of a hemp worker in Livorno on September 6, 1825, Giovanni Fattori showed such an early talent for drawing that, when he was 15, his father sent him to study with a local painter. He continued with another private teacher in 1846, when he moved to Florence, where, lacking funds, he was able to attend the Accademia di Belle Arti only sporadically. The few extant paintings from this early period are portraits and imaginative scenes evoking the Middle Ages and Renaissance. In 1848, caught up in the enthusiasm for the Risorgimento, he joined the Action Party. Although he did not take part in any fighting, the experience had a profound effect on his work.

In the early 1850s, Fattori began spending time at the Caffè Michelangiolo in via Larga (today’s via Cavour), a hang-out for painters like Telemaco Signorini and Silvestro Lega, who dissented from the then favoured decorative style. Fattori soon adopted their new macchiaioli technique, initially a term of ridicule from the Italian word macchia (stain), connoting them as “daubers”. Influenced also by the advent of photography, these artists, considered forerunners to the French impressionists, used bold, colourful brush strokes contrasted by chromatic tonalities.

An introverted and exacting artist, Fattori was bitterly disillusioned (“I have spent my years hoping and I will end discouraged”), frustrated by the lack of the recognition and by recurrent, crushing penury. It was only in 1859, after he won prize money for his painting of The Italian Field after the Battle of Magenta, that he could afford to marry. The family of his bride, Settimia Vannucci, opposed the marriage. (He described the wedding as “simple, without lavish, without guests”.)

In the 1860s, Fattori, then in his mid-thirties, began to realize his artistic vision. Called “the Etruscan” by his fellow artists for his fearless use of colour, he gradually became one of the most important exponents of the Macchiaioli school. His trademarks were realistic paintings of country life, particularly in Maremma with its butteri (cowboys); seascapes, often around Castiglioncello, near Livorno; sensitive portraits of family and patrons; and epic canvases of meticulously detailed scenes of military life and campaigns. Keeping a small notebook with him at all times, Fattori continually made sketches of his surroundings; later using them as the basis for many of his paintings and etchings. In 1869, while briefly serving as professor of painting at the Accademia di Belle Arti, he had begun experimenting with etching. Although he visited Paris in 1875 and met several Impressionist painters, with the exception of Manet, they had little influence on his work.

The last decade of the century saw his most productive period. It was also a time when he enjoyed some recognition, even internationally, and received many awards, especially for his etchings. Appointed to give master classes in painting at the Accademia in 1886, Fattori could finally rely on a fixed wage. Among his students was Amedeo Modigliani.

Following his wife’s death from tuberculosis in 1867, Fattori had a tormented relationship with Amalia Nollemberg, the German governess of a family for whom he gave private painting lessons. He then married Marianna Bigozzi in 1891. Devastated by her death in 1903, he later married an old family friend, Fanny Martelli, in 1907, hoping she could help comfort Bigozzi’s children, but she passed away a year later, in May 1908.

Fattori, who died soon after, in August 1908, is buried in the loggia next to the Sanctuary of Montenero, near Livorno. Fattori’s commemorative plaque on via Battisti in Florence was placed there on the initiative of his fellow artists. A round niche contains a bronze portrait bust by his friend Valmore Gemignani (1878–1958), who also made a full-length statue of him that stands in Livorno.

Summing up his life, Fattori once confided, “I have loved art ardently and love it even now. I am attached to her like a lover and I believe that art is all emotions rather than analysis.” His work is testimony to that.

To see some of Fattori’s paintings, visit the Museo Civico Giovanni Fattori in Livorno. You will find Gemignani’s statue of Fattori between the piazza della Repubblica and the Cisternino di città. While you’re in town, try a bowl of the city’s famous fish soup, cacciucco livornese, at a local trattoria.