Tuscany is an old land, crowded with ancient marble daydreams left behind by geniuses who passed in the wink of an eye, but if by chance they and their families awoke and resumed their lives as they had been living them eight hundred years ago, the scene might look something like the Festa Medievale of Castiglion Fiorentino. 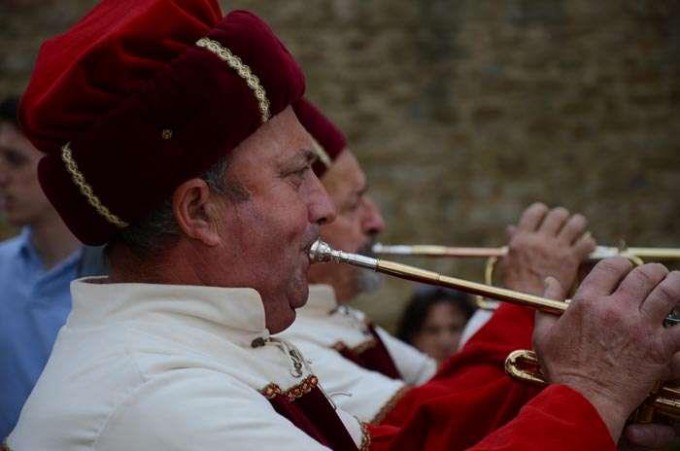 If you have ever driven south from Arezzo to Cortona, you have seen the Cassero tower of Castiglion Fiorentino, where at the end of every May the town hosts the festival. It began in 2002 when Il Gruppo Storico e Sbandieratori Il Cassero di Castiglion Fiorentino wanted to celebrate their 20 years of dazzling, costumed flag-throwing, drum-beating and bugle-blowing. They put together a little festival up at the top of the hill. Over the years, it grew.

Now fragrant smoke from roasting meats wafts overhead as hundreds upon hundreds wander dressed in the kind of clothes seen in frescoes by Piero della Francesco.

You may have scoffed at the “Renaissance faires” of your own country, full of boozy weekend Falstaffs and blousy “serving wenches.” But the native Castiglionese, having been fitted in such garments by skilled tailors since childhood, look natural in their cotehardies and surcoats, their braies and chausses, their crackowes and poulaines. 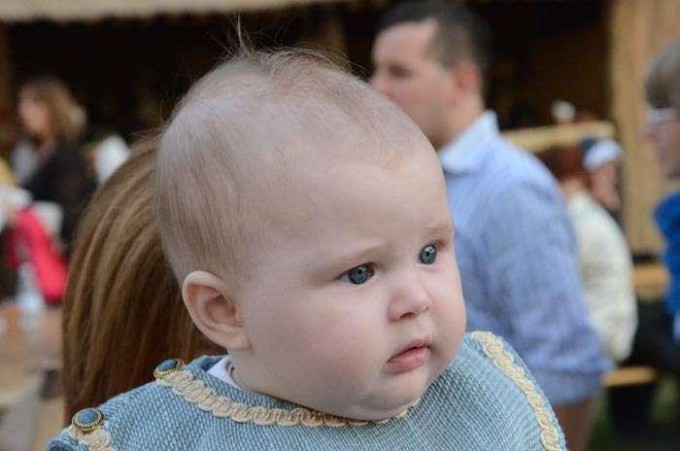 The costumes are for real. “This is not a tourist attraction,” says Luca Ghelli of Rione Cassero, which puts on the festival every year with all-volunteer help. “This is for the people.”

It’s what they do to have a good time. You are welcome to join in. You needn’t go to extremes. Just remember, says tall, bearded art historian and Cassero president Pierpaolo Mangani, Please, no sneakers! He practically winces as he says it.

Duck through a gate in a stone wall to find archers competing with crossbows. In the natural amphitheater, sit on stone steps and watch fire eaters and dancers torch the night in streaks of orange that linger in the eye as afterimages of an ancient time.

Musicians roam, playing up-tempo medieval-inspired instrumentals. In 2013 and 2014 it was the Portuguese band Cornalusa. This year it is Futhark M.W.M. Firm out of Milan. The M.W.M. stands for Medieval War Music. 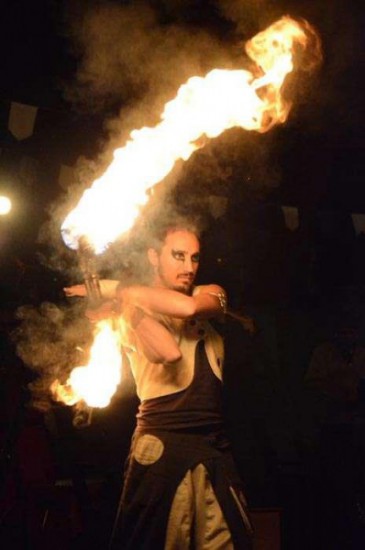 “We love to take a classic medieval song,” they say, “and play it with a more powerful groove, to give more energy to it.” The band of five formed when they met in a medieval reenactment group in Milan, La Compagnia del Cardo e del Brugo. Listen to their music and download their eight independently produced CDs on ReverbNation, or come to the festival to see them live.

Just hang around until you hear them start. Their performances at the Festa Medievale follow no set schedule. “This is Italy,” says Ghelli. The performers follow their instincts—instincts as old as the roots of their instruments: cornamusa or bagpipes; bouzouki (the Greek stringed instrument similar to a mandolin); the duval, or Turkish drum; the grancassa or bass drum; and also flute and guitar.

Keep in mind, says Pier Paolo, all this is just preparation for the crowning event of the year, scheduled for the third Sunday in June, the Palio di Rioni of Castiglion Fiorentino. “The Palio,” says Luca Ghelli, “looks like a horse race, but it is not a horse race. It’s diplomacy.” 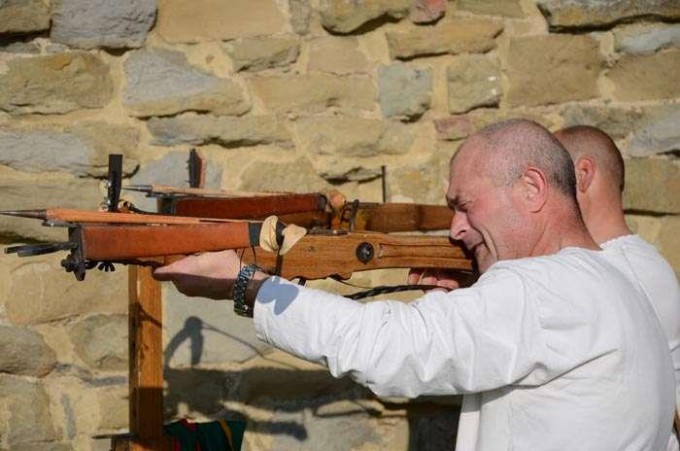 Ponder that while eating skewers of sizzling grilled Chianina beef. Stand and watch the crowd or sit on benches at long wooden tables and enjoy plates piled high with lamb and pork, pulses (lentils and beans), and local organic grilled vegetables such as cabbage paired with radicchio, walnuts and Parmigiano flakes. Drink the local wines of Carlo Tanganelli of Santa Lucia, and Antico Colle of Montepulciano.

If you come before sundown, go stand at the low stone wall on the west side of the grounds, where the whole Val di Chiana stretches out before you. Eighteen kilometers to the northwest in its declivity between two Appenine foothills you can see the ancient town of Civitella. Then walk down the steep, curving stone street and across the Piazza del Municipio to the Loggiato Vasariano where through the three arches you see the breathtaking hills cupping the Val di Chio, their steep sides patchworks of olive groves in corduroy rows, finely striped plots of vegetables, and vineyards now lush with approaching summer. Then climb back up and enjoy the music, the flag throwing, the fire eating, the sword swallowing, the food, the wine, the amazingness of it all.

On the last night, Sunday, June 5, the biggest night, there are fireworks.

Festa Medievale di Castiglion Fiorentino
May 27–29 & June 1–5, 2016
Free admission
Parking is available in Piazza Garibaldi and in other spots around the bottom of the hill.
By train from Florence it’s about an hour and 20 minutes, with a 20-minute walk up the hill. The walk to the top can be steep.
Website 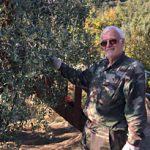 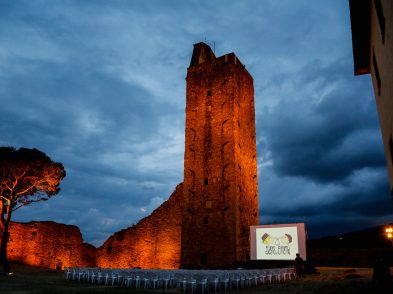 Castiglion Fiorentino’s fifth annual free summer outdoor food, film, and interview series Sagra del Cinema (you get the sagra joke, right? If not, see the festival T-shirt that depicts a ... 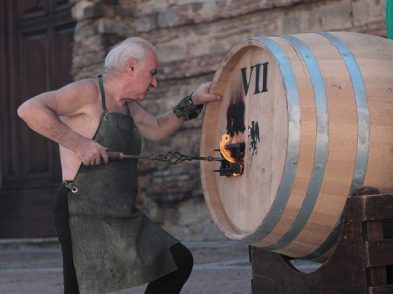 In America, a barrel race is a rodeo event in which horsewomen negotiate a cloverleaf course marked off by three 55-gallon metal barrels. In Montepulciano, the Bravìo is sometimes described ...