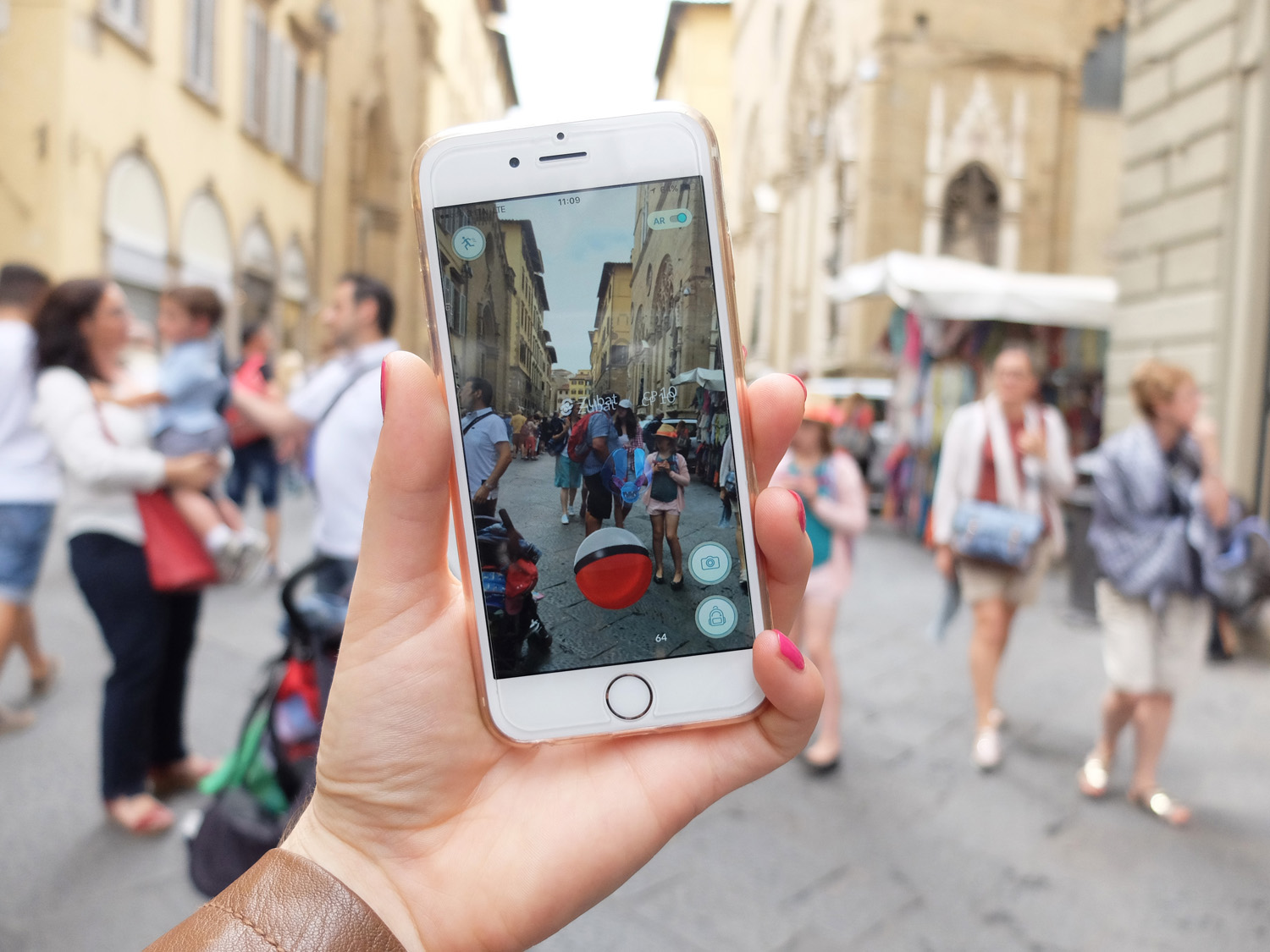 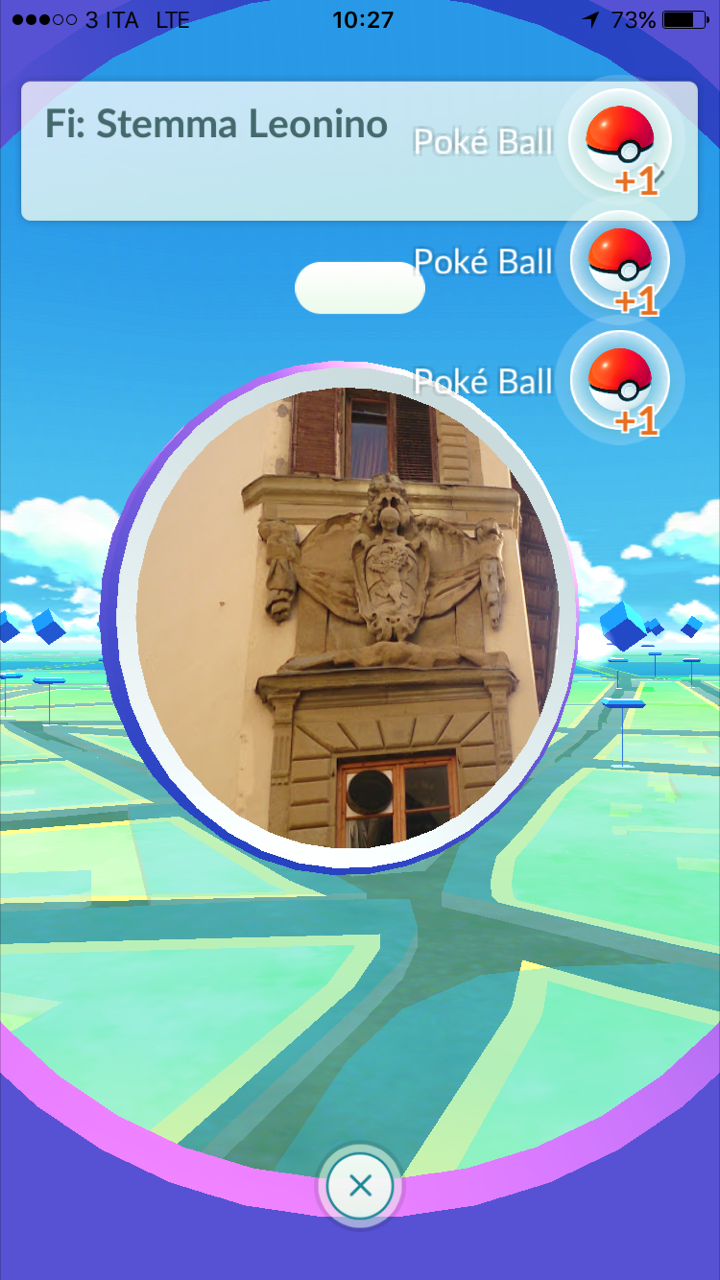 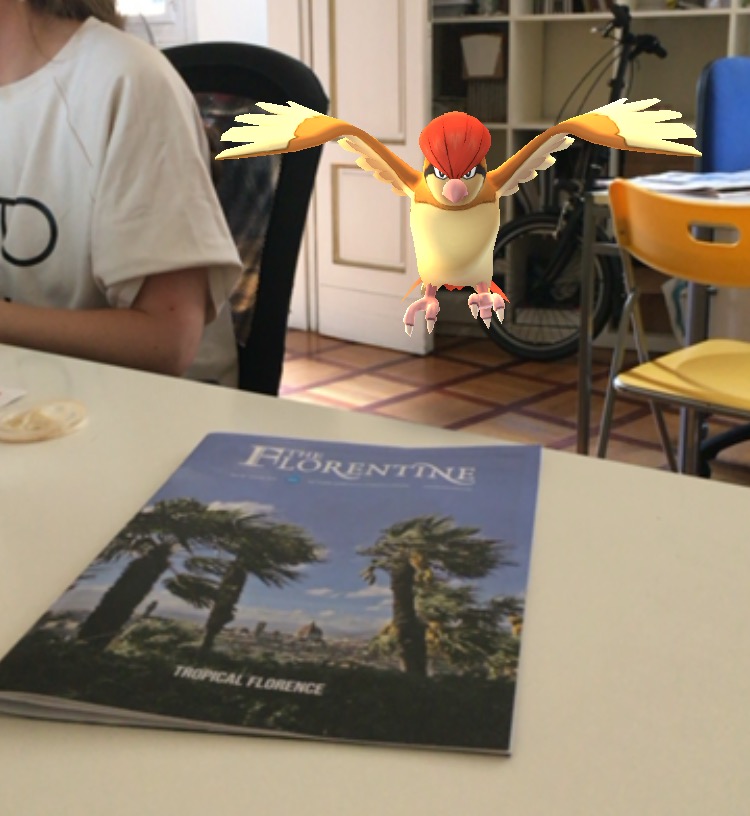 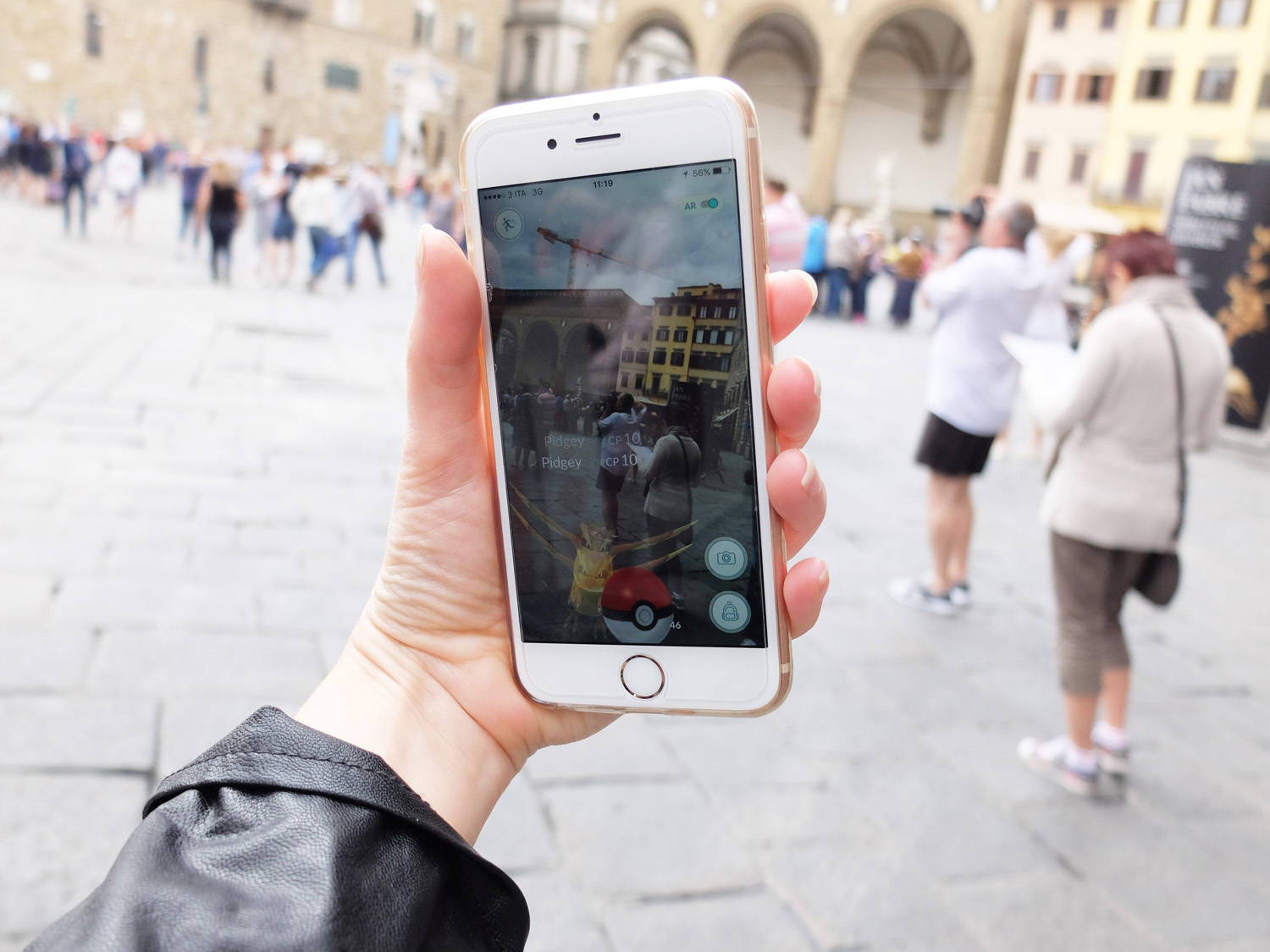 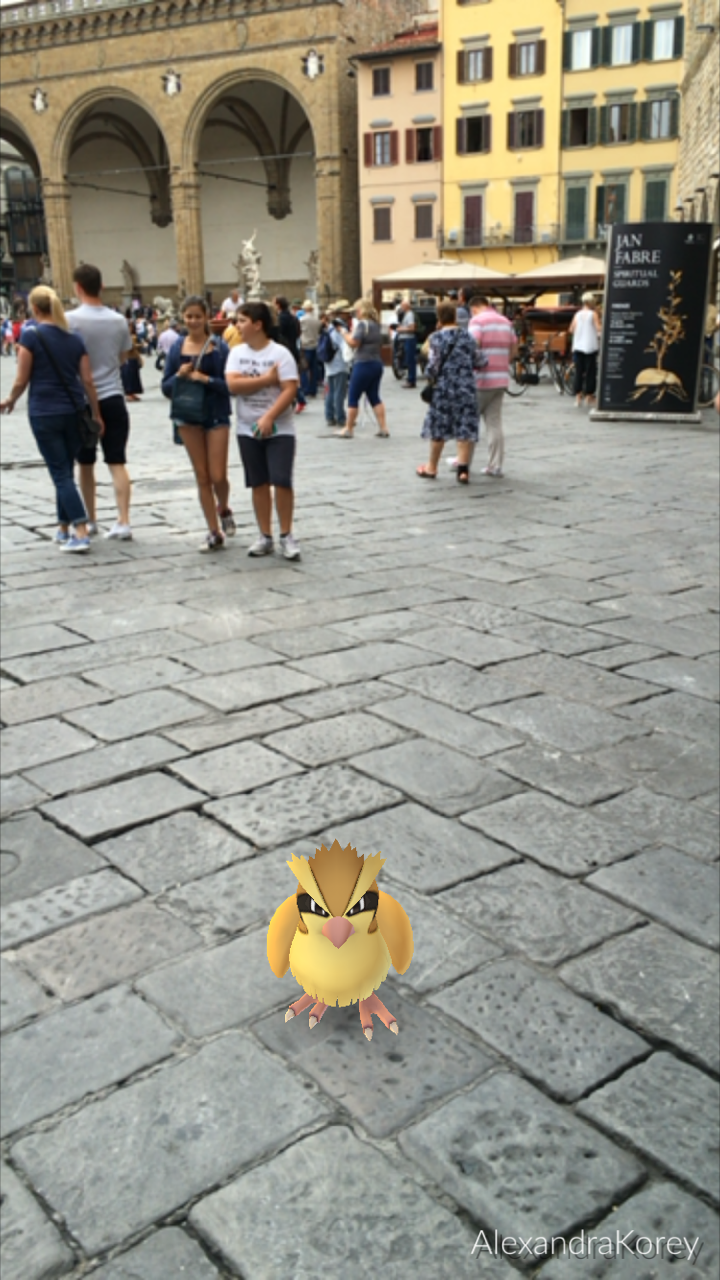 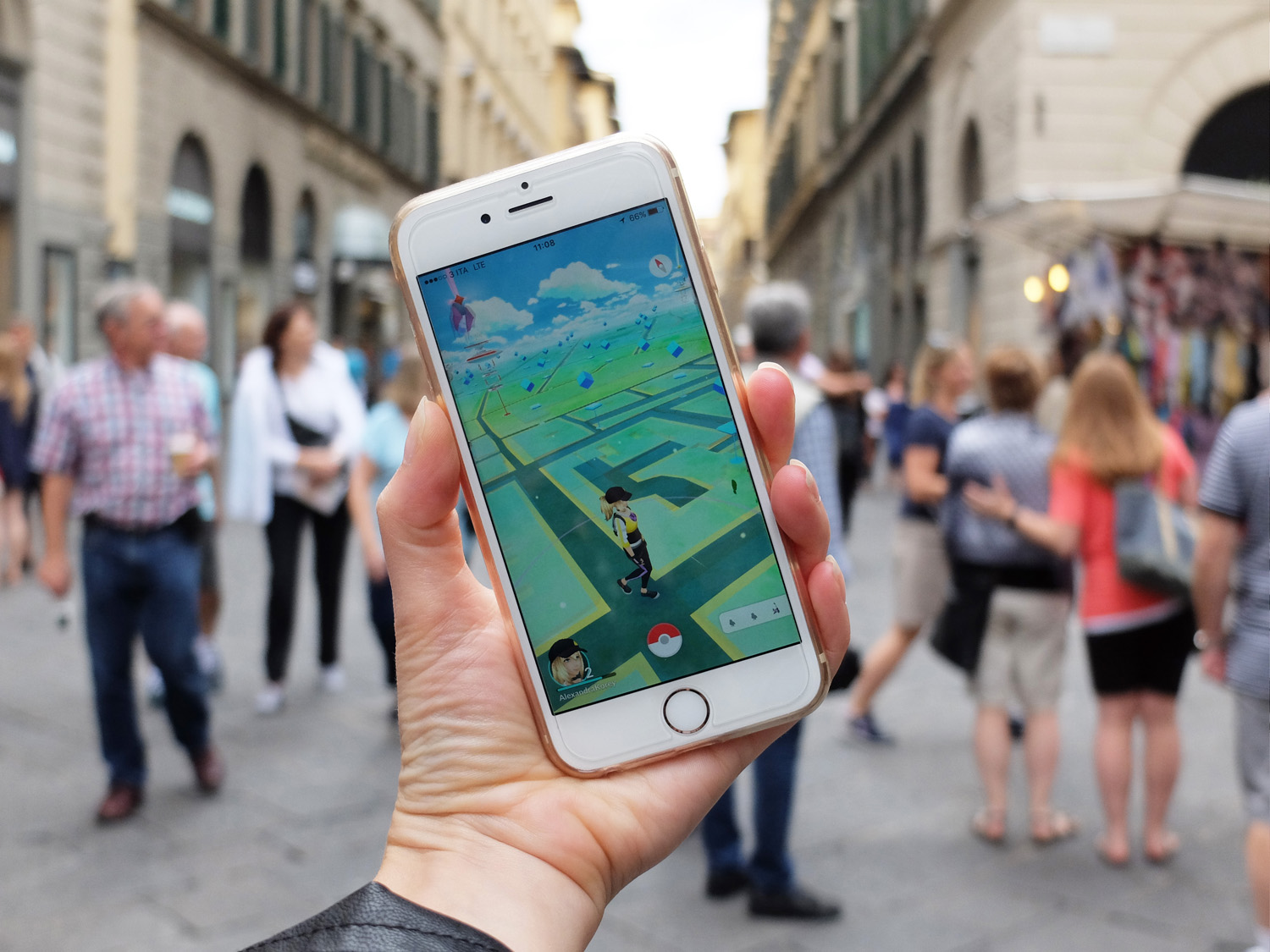 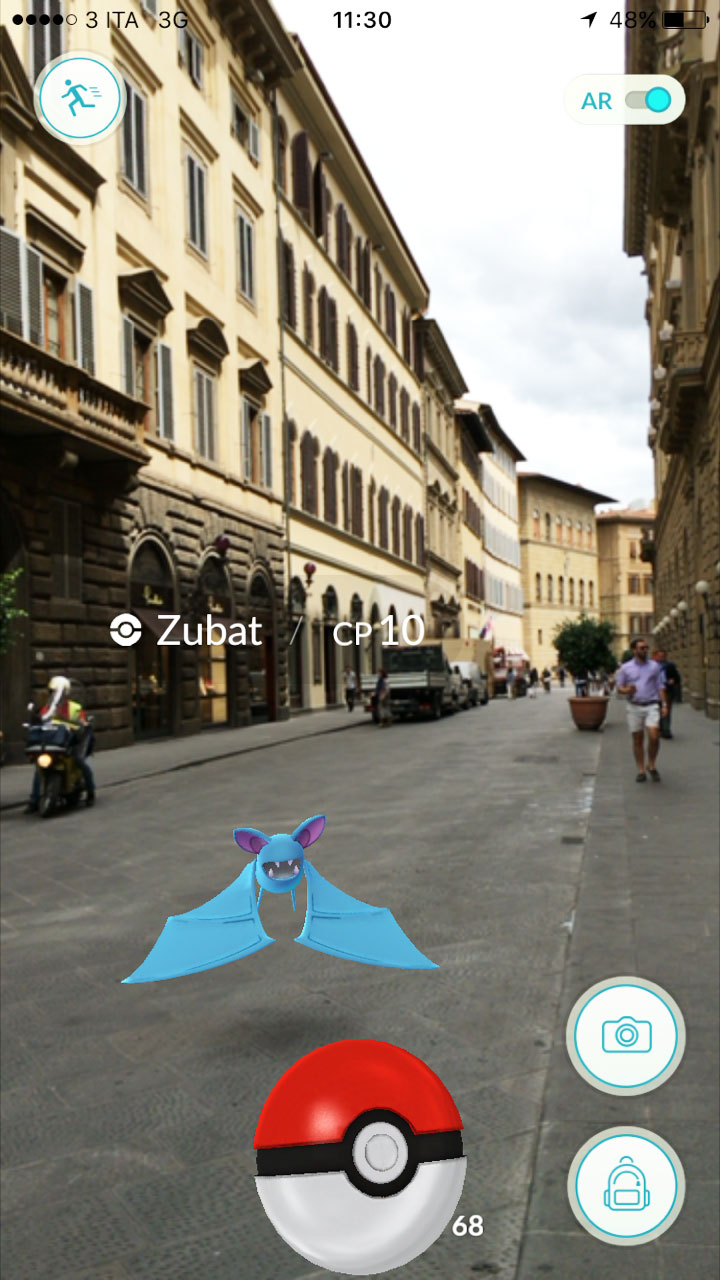 The viral VR game Pokemon Go was released today, July 15, in Italy on the local App Store, nine days after its US release crashed developer Niantic’s server due to its swooping adoption. Always aware of the latest digital trends, at The Florentine we downloaded the app first thing in the morning and set off to capture Pidgeys in piazzas.

For the uninitiated, Pokemon GO is a virtual reality smartphone game that encourages people to get outside and capture cute animated animals. It is an evolution of an earlier VR treasure hunt app called Ingress, which was much darker and had a large user base but never went viral. Pokemon Go’s virtual reality-enabled treasure hunt uses Nintendo’s cute animals some may remember from 20 years ago, hence, it’s fun for all audiences. You catch the funny beasts by throwing balls at them, and you get more balls by stopping by Pokestops, which are located at the site of important sculptures and monuments—hence, Florence is full of Pokestops.

My experience started off on the ATAF bus to work, where a passenger’s head hosted a cheeky Bulbasaur. In piazza Santa Maria Novella, I’m hot on the tracks of a purple Zubat. People are looking at me strangely, but I figure anyone hip knows what I’m up to and I don’t care. It’s for research purposes. I follow the Zubat into the street and almost get hit by a bus.

I stock up at the Pokestops that litter piazza Santa Maria Novella, thanking the Poke gods that I work in an area so rich with the historical landmarks cited on Google Maps that power the app’s underlayer.

The Stemma Leonino that decorates one façade of The Florentine’s office, Palazzo Mondragone, is a Pokestop. I use some of the newly acquired balls to capture a Zubat outside our front door.

I pretend to work briefly before heading out again “for a meeting” so I can capture a very credible rat near the Duomo and a pigeon in piazza della Signoria. I find myself blocking traffic for a horse and carriage.

Back in relative safety indoors, in front of my computer, I turn on the app to collect data for this article and find that there is a beastie right here in the office. We didn’t place a lure to get him in here, and I wonder if we’ll soon have hunters knocking on our door to collect it. I will give them a copy of the newspaper.

Could Pokemon Go be the next big thing in tourism?

I’ve played Pokemon Go for about an hour. I can see it being fun especially if played with friends, in these early glory days, but I’ll quickly tire of this game. Kids, however, are gobbling it up, and right now, Pokemon Go may be a way to get kids interacting with the city outside our front door, and maybe even get them looking at and thinking about the monuments marked as PokeStops.

Licensed tour guide Elizabeth Butler already played imaginary Pokemon Go with some young American players before the game was available in Italy. “We tried to make up our own version of Pokemon in Florence, guessing what we could find in different monuments, and where they would be in the city.” It takes creativity and discussion to think what beast would be best for each historic location.

Statues and monuments are identified on the app’s map as PokeStops, and are marked by a name and photo, encouraging players to be aware of things around them. These may range from a minor plaque on a wall (that you might not have noticed) to a landmark like Palazzo Vecchio.

Playing Pokemon Go in Florence with children could be an opportunity to talk about these items—IF they’ll take long enough to look up from the screen. An interesting evolution would be if, upon clicking the PokeStop, in addition to the enlarged photo it now shows, the app might integrate information from Wikipedia, turning it into a proper VR travel information app.

Have you tried Pokemon Go in Florence? What do you think?