A horse is a horse

Francesco is a filmmaker and he and I have a good working relationship, unless you count the fact that he is the parade and I am the rain.

A peaceable guy who sees the world through a wide-angle lens, he’s all about waiting. Waiting for the glare to go, and the noise to stop and the wind to blow—or actually to stop blowing, for even a stifled off-screen sigh can ruin any masterpiece still in the making after 36 takes. Francesco knows how the sun moves and recognizes time by the shadows that climb a building’s façade. My knowledge of time is far less poetic—as in “Time’s up, Bud, they’re going to kick us out.”

For this reason, Francesco has come to call me the “Hurry Girl”, which I like for several reasons. First, yes, I am a hurry girl. I like tapping the floor with my foot. I like wrapping things up before the westward sun does. Because, well, as my grandmother used to say, “the sun eats the hours”, and it seems particularly starving these days. The second reason I like Hurry Girl? The “h” and the “u” are charming on the Tuscan tongue, and I’m a sucker for pronunciation.

But charm aside, Francesco and I had one month to complete a video reportage on a lady painter whose works are hidden in hillside villas and monasteries. And while a month may seem like a long time to traipse through Tuscany, trust me, no one sane should ever attempt it. Reasonable people need three years at least. So, for the better part of the summer, I was both Hurry Girl and Worry Girl.

“You live in a time warp,” I’d tell my “con calma” cameraman.

Francesco would shake his head, “You should take more time to enjoy life.”

He’d do his best to reassure me. “Don’t worry, siamo a cavallo.” 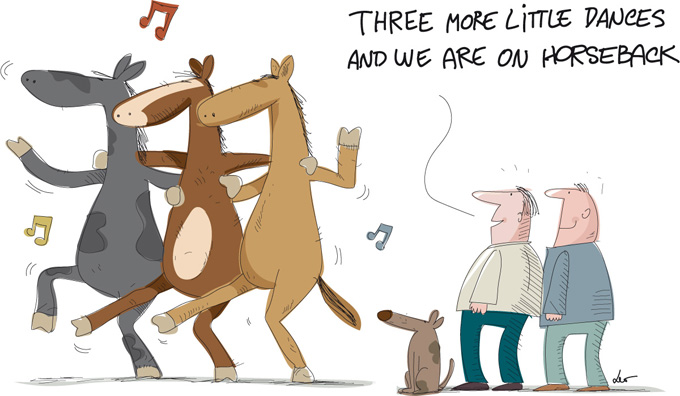 Italians say “we are on horseback” when they want to say, “Don’t worry. All is well. We’re going to make it, and with hardly any trouble.” I found the phrase fun but inaccurate. In my line of thinking, we’d need a Trojan horse to make our way into most of these places and a gift horse to get us safely out again. Because, pessimism aside, Italy in August is not the best place to make productive things happen.

And monasteries, I might add, are not easy to enter even at times when the rest of the world has woken up from summer slumber.

As it turned out Francesco and I were both right. As the month progressed, all sorts of “horses” began happening. And Bella can take the credit for it. A researcher with the courage of youth and the smarts of a sage, she started leading the crew to these fortress-like spots. Because her demeanor is true to her name, we gave her the “hard jobs”, which usually entailed ringing the doorbell of any place whose inhabitants were likely to hope she’d come to join the nunnery.

The sisters would look out at her from their barricaded window and say, with centuries’ worth of surprise, “But no one enters here. This is a cloistered convent.”

For me, watching Bella squeeze her earnest face through the grates was a quasi-mystical experience. I cannot put my finger on how she managed to convince them time and again. One exchange was particularly elating: “Well, if you want to do archival research here, I’m sure you’ll find what you need. Things haven’t moved since the seventeenth-century. Your artist’s papers will be where she left them.”

And she was in. It was nothing short of miraculous, I tell you.

In September, Francesco presented me with our raw footage and a smirk. “You see, there was no reason to fuss. Tre balletti ed è bell’ è fatto.” Three little dances and we’re good and done.

I smiled in spite of myself. Funny, the turns life takes. Years ago I wrote a book called Italians Dance and I’m a Wallflower. What I’ve learned since? It’s all about dancing with monks.

Enjoy more of Linda Falcone’s humorous
insights on Italian culture in her two classic
books published by The Florentine Press!