Charismatic Dutchman Eric Veroliemeulen moved to Florence ten years ago for love. Decked out in a white naval uniform complete with gold epaulettes, he walked off the ship on which he was working and straight into the man who would become his husband. Six months later he followed his heart to Italy, where it has been docked ever since. 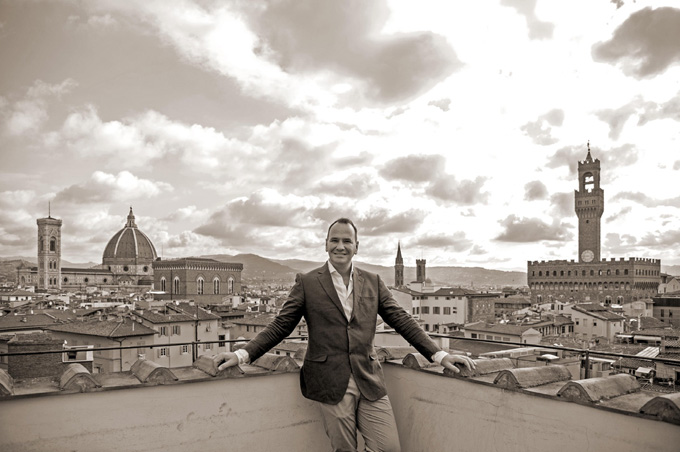 At first, Eric’s life in Florence wasn’t all plain sailing: “It was a real challenge, working and living in a country where I didn’t speak the language.” Total-immersion Italian classes at the Scuola Leonardo da Vinci soon helped break down the communication barrier, however, and after nine months, at the age of 29, he landed his “dream job” working at a boutique hotel in Chianti.

Although it was an intense experience, it confirmed to Eric that hotel management was his vocation. “In the seven years I spent at the hotel in Chianti, I helped to turn its fortunes around and put it on the international map. I learnt how to capture the feeling and drive of a place to help the brand grow.” With these hard-earned skills under his belt, he was soon headhunted for a new hospitality project just outside Florence.

Thanks to the “beautiful relationship” that has developed between Eric and the Malenchini family who own the estate, the 11th-century Villa Medicea di Lilliano was reborn as the perfect Tuscan getaway. Once the magnificent family home of Grand Duke Ferdinand II, the property comprises 70 hectares of land, 16 hectares of vineyards, the main villa with banqueting facilities, breath-taking gardens and private rooms where the Malenchini still live, as well as six villas available for rental. Eric quickly realized that Villa Medicea di Lilliano, tucked away in the Chianti Colli Fiorentini hills, yet only 15 minutes from Florence’s city centre, would make the perfect “getaway” hotel and event location.

Making the dream a reality, however, was something of a challenge. “This was a new concept and a start-up project was never going to be easy. We needed to do everything, from creating a booking system to sourcing the highest quality linen. Both creative and bureaucratic aspects had to be considered. At times
I was worried about spreading the word and filling the reservation book. But I tried to remember that what we were doing was unique, something really special. I realized we could only go forwards, we could only move onwards and upwards.”

Finally, everything came together in the summer of 2015. Eric and his team were working towards opening in time for a wedding ceremony and reception at the end of August, the new venture’s first major event for which all the accommodation on the estate had been booked out. There was not a minute to spare,
but they made it: “It was a wonderful occasion and the couple were incredibly happy—they still write to me today to thank me!”

The estate has now been recognized by the Italian government as an official venue for marriage ceremonies, and Eric is particularly proud of the joyous occasions hosted in the Villa Medicea di Lilliano gardens, terraces and villas. Thanks to recent changes in Italian law, civil partnerships can be celebrated here, too. Yet weddings are only one of the many types of event for which the Medici estate caters, and Eric’s enthusiasm for everything he does and the people he meets is evident: “Fashion events, corporate meetings, photo shoots, graduation parties… whatever the occasion, I just love to welcome people. Whether people are renting out an apartment or the entire estate, whether they are staying for the afternoon, a weekend away or an extended period, I just want them to feel at home. Hospitality is an art, and Florence and Tuscany offer a great canvas to work with.”

It’s not just Eric’s professional life that is flourishing: he loves his personal life in Florence, too. “For ten years I’ve lived in central Florence in a great apartment. I find nothing more peaceful than cycling through the streets, or sitting on my small terrace that overlooks the city.” He is also about to celebrate his 10-year anniversary with partner Jeremy, whom he met as he walked off his ship all those years ago. No wonder then that Eric says, “Now, I would find it very hard to leave.” 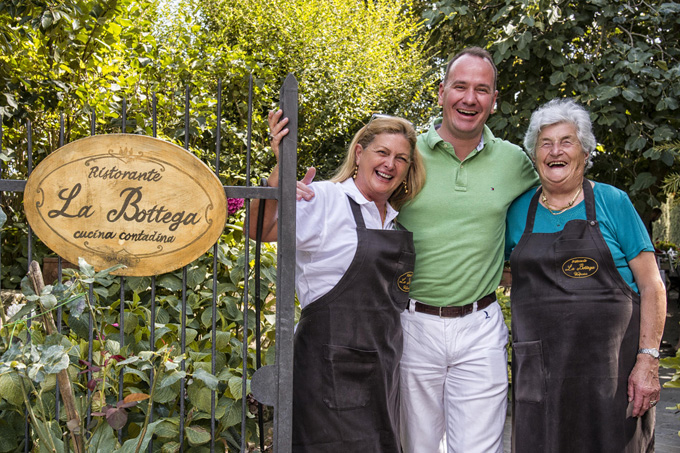 Best gelateria?
La Carraia—the cheesecake flavour is to die for!

Best restaurant for a quick, easy bite to eat?
Trattoria Marione in via della Spada

Special place for a great lunch or dinner?
La Bottega di Volpaia, near Radda in Chianti

Something you will never get used to living here?
The bureaucracy