Opera tenor Andrea Bocelli is a global superstar who today would rank high up in any list of famous living Italians. As classical music’s top-selling artist, with over 80 million sales, he has recorded entire operas and umpteen arias, but, like Enrico Caruso and Luciano Pavarotti before him, he does not snub the idea of vocalising popular Neapolitan songs or duetting with Sarah Brightman, Celine Dion, Jennifer Lopez, Tony Bennett and countless other performers. Just never call him a “crossover” artist as he despises the word, maintaining that he simply “sings for everyone”.

Born on September 22, 1958, in Lajatico in the province of Pisa, Bocelli grew up a farm boy, the son of Alessandro (Sandro) and Edi Bocelli who sold agricultural machinery. In keeping with a long Bocelli family tradition, they also made wine that Andrea, with his mother and younger brother Alberto, continue to produce on that same farm, today marketing it worldwide. At six years old, Bocelli started piano lessons and later added the flute, saxophone, trumpet, trombone, guitar and drums to his repertoire. After his nanny Oriana gave him a record of Franco Corelli, known as “the prince of tenors” in the Sixties and Seventies, the boy knew he wanted to sing and did so wherever he could: at home, in the school playground, at church, or whenever anyone would listen to him. 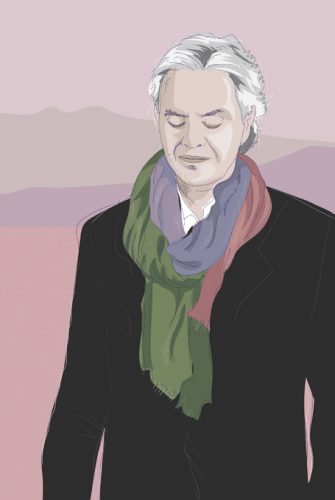 Born with congenital glaucoma, Bocelli lost his sight at age 12 after suffering a brain haemorrhage caused by a hit in the head with a soccer ball. Yet this disability has never stemmed his incredible energy. Dubbed in the family as “the earthquake”, he was—and still is—constantly on the lookout for a new challenge. He frequently rides his horses, goes skiing and surfs near his home on the Tuscan coast. But he also remembers the time he spent after the accident at an institute for the blind as the unhappiest of his life, far from his family and the freedom of his familiar countryside.

After high school, Bocelli studied at the University of Pisa where he graduated in law. At the same time, to help pay for his university tuition and singing lessons with teachers, such as his hero and mentor Franco Corelli, he performed at local piano bars. In this period, he met Enrica Cenzatti, who he married in 1992. They had two sons, Amos (born in 1995) and Matteo (1997) before separating in 2002.

Bocelli’s singing career began with an audition for the popular Italian singer-songwriter Zucchero Fornaciari in 1992, followed by his substitution of Luciano Pavarotti during Zucchero’s European tour that year. In 1993, he signed with the music industry executive Caterina Caselli of the record label Sugar, who in order to increase his visibility on the music scene entered him in the Sanremo Music Festival. He won the Newcomers section and the following year went on to win main prize in the Big Artists’ category. Since then, he has never looked back.

In over two decades not only have his record sales reached gargantuan numbers but he has also, despite what he describes as his chronic stage fright, sung before kings, queens and princes, popes, presidents and movie stars, as well as live and television audiences the world over. But Bocelli does not take his voice for granted. He trains it like an athlete trains his body. He treats it as an instrument doing vocal exercises and practising daily. He watches his diet by eating simple, healthy food, preferring his pasta with extra-virgin olive oil and parmesan cheese instead of heavy sauces and butter. Regular physical workouts build the stamina required for his constant globe-trotting and strengthen his breathing. Although classical music critics are divided about his talent, Luciano Pavarotti, one of his greatest fans, believed that “there is no finer voice than Bocelli”.

A genial and deeply religious man, in 2014 Bocelli married his long-time fiancée Veronica Berti two years after the birth of their daughter Virginia. Twenty-five years younger than him, his second wife doubles as his manager. They live in a large seaside villa at Forte dei Marmi, not far from where his ex-wife and sons also reside.

Over the years, Bocelli has won dozens of national and international nominations and awards, which include the Grand Officer of the Order of Merit of the Italian Republic in 2006 and a star on the Hollywood Walk of Fame in 2010.

In 2011, Bocelli set up the Andrea Bocelli Foundation, whose mission is to fund innovative medical and disability research and to fight poverty. Not slow to enlist friends, he has received support from George Clooney, Quincy Jones, Michael Bolton and many more celebrities who often attend the Foundation’s benefits to help out with fundraising.