Up, up Ai Weiwei

Ai Weiwei is now described as the world’s most famous living artist. Millions round the globe have followed him on Twitter and Instagram; his impassive, bearded portrait symbolises his defiant campaign for democracy. While his biography includes house arrest and prison beatings, and the illegal demolition of his studio by the Chinese government, his artwork is much less well known, despite helping to design the “bird’s nest” stadium for the Beijing Olympics in 2008. By spanning the career of this contemporary phenomenon, the exhibition at Palazzo Strozzi attempts to put the artist before the activist.

Ai Weiwei is a thoughtful artist—and a provocative one. He acknowledges the impossibility of originality. Instead, he uses objects that already exist in the world, reimagines them and makes them new in some way. 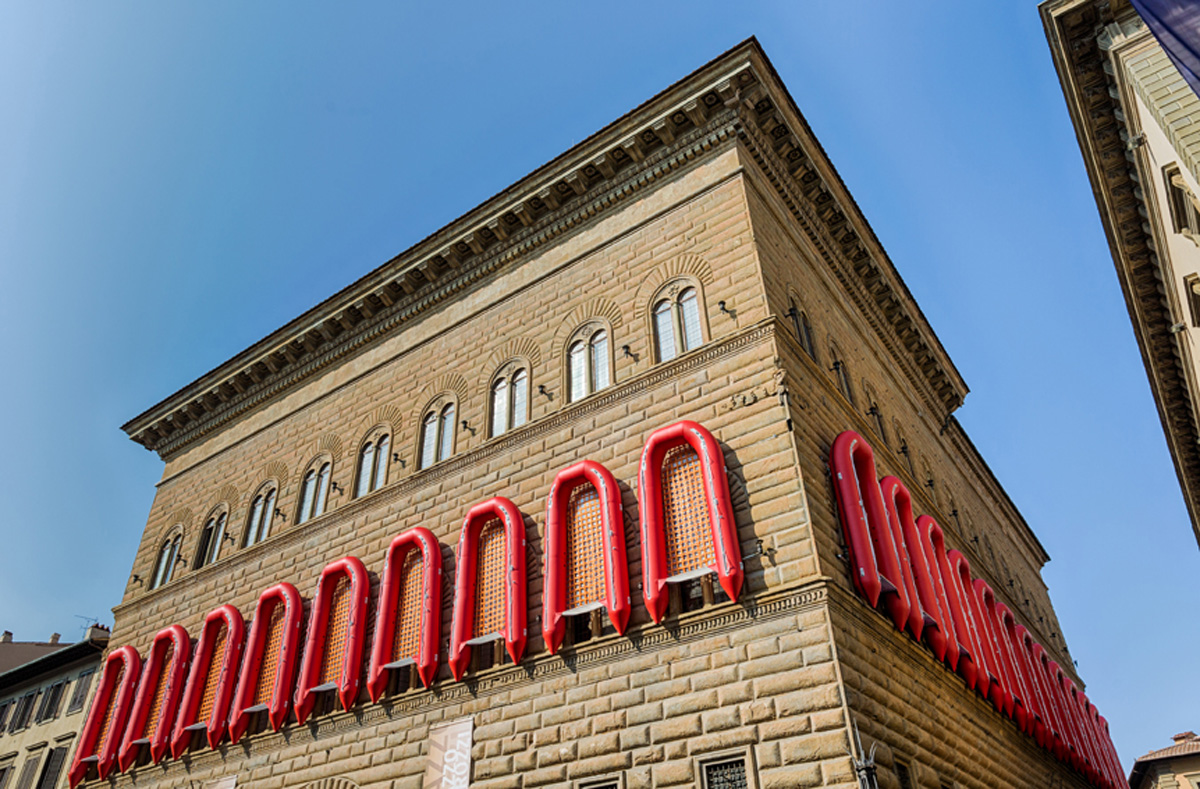 At first, his pleasure in recycling artefacts seems puzzling and unnecessarily repetitive. For instance, why dip Han dynasty vases, dating from the second century AD, in modern car paint? Coated with a dull, monochrome sheen, the antiques reemerge as sleek, generic and new, their long history eradicated.

And that is the point. Ai transforms familiar forms and remodels their significance. In the transition, he injects them with far-reaching and often moving new connections. For Ai Weiwei is a disciple of Marcel Duchamp, the Frenchman who introduced the ready-made as a legitimate medium for artists.

Whether humble or historic, these objects become instruments in the artist’s epic and dignified struggle with the authoritarian policies of China’s repressive régime. Apparent acts of cultural vandalism trigger searching thoughts, often about how new destroys the old in the race for progress and modernity. In this way, Ai draws the imagination onto the metaphorical plane where his work thrives. Indeed, lying at the root of Ai’s strategies is his obsession with contemporary China. Official disregard for the country’s traditions have resulted in historic sites being destroyed to make way for bland cityscapes of glass and steel.

The visual drama of Ai’s work is perhaps its least sustainable quality. It eventually becomes monotonous. Its strength lies in making his audience ask questions of what they see. His profile Map of China (2008), for example, is an astonishingly well-crafted block rising from the gallery floor. But it becomes memorable for recycling wood saved from dismantled temples, some dating back to the 1600s. They stood in the way of the bulldozers.

A recurrent theme is how the new tramples down the old. To make Grapes (2015), Ai created a dynamic sculptural shape with a dozen or more seventeenth-century Qing dynasty wood stools famous for their uniquely practical construction. But by being restructured into art, the stools are robbed of their age-old function.

A parallel is implied between old furniture and old lives, and a persistent theme in Ai’s career has been the condition of ordinary Chinese life. The 950 bicycles neatly stacked in interlocking columns symbolise the simple liberation from the highly constricted social and political atmosphere of the Maoist era that Ai’s generation (he was born in 1957) discovered in being physically mobile. Ironically, the artist’s passport was confiscated by his government for four years until 2015. Ai experienced first-hand from childhood the state’s mistrust of artistic expression. His father, a modernist poet, was branded a “triple criminal” in 1958. When he was exiled to a labour camp in a remote region for over a decade his family went too.

Liberalisations introduced by Deng Xiaoping after Mao’s death radically altered the lives of intellectuals. For much of that time, however, Ai lived in New York among Chinese expatriate dissidents. Their spirit of revolt and constant questioning of authority nourished his own inclination towards rebellion. He returned to China in 1993 after 12 years abroad, armed with intransigent Dadaist strategies learned in New York’s sophisticated art world. Perhaps the most poetically resonant articulation of those methods in this show is Souvenir from Shanghai (2012). It reconstructs a wall of his studio in that city that the authorities abruptly demolished on spurious grounds.

In response to this outrage, Ai invited his supporters to a banquet where they dined on river crabs. Since Ai’s personal struggle is part of his art, he created He Xie (2011). It commemorates the occasion with hundreds of little red and brown porcelain crabs brushed into the corner of the gallery as if discarded. The crab is a traditional symbol of tyranny.

The most compelling installation, however, deals with the Sichuan earthquake in 2008 in which thousands perished. Ai has funnelled his outrage into several composite sculptures in the years since embarking on his own investigation into the disaster, an enquiry that has blamed the guilty and contributed to his ongoing harassment by the authorities.

In Snake Bag (2008), 360 identical backpacks stitched together into a serpentine line stretching across an entire wall recalls the 5,000 schoolchildren killed in the tragedy when the metal supporting new buildings buckled and collapsed. Nearby is Rebar and Case (2014). It targets these shoddy building standards. One twisted metal bar carved in marble stands for all; it rests on top of one of several wood boxes like a shattered spine. Meanwhile the boxes resemble coffins but, with their varied shapes and sizes, look like packing cases for shipping merchandise, as if human life was merely a commodity to trade.

Ai’s art cannot be separated from his activism, which now has global reach. The 22 rubber dinghies anchored to the palazzo’s façade—the most eye-catching feature of this show—highlight the fate
of refugees fleeing conflict in Africa and Asia in these fragile craft. Titled Reframe (2016), it is simple and direct, and uses repetition to amplify its message. It is first-class agitation.

Ai unleashes the political power of art. He breathes extraordinary narratives into ordinary objects with unexpected subtlety. These metaphors embody ancient histories and modern struggles, honour the dead and the daily suffering so many endure for freedom. Ai’s art is bright, shiny and globally traded. It also channels anger at injustice into art that aspires to be useful, an instrument of change.