“This desire to govern a woman—it lies very deep, and men and women must fight it together…But I do love you surely in a better way than he does {…} I want you to have your own thoughts even when I hold you in my arms.”

I came to Florence, like so many nice American girls in college, during a semester abroad. I met a few friendly-enough folks in my program but spent most of my time alone, puttering around the piazze and fancying myself a 21st-century flâneur type, loving how my leather-bound notebooks, cappuccini sipped solo and walks through produce markets sans purchase made me deep. It was a good time.

I left Florence that semester out of the airport and was randomly selected for additional screening in the security line. I watched as the agent emptied every last item from my clunky purse—dirtied receipts, unopened sugar packets, ATAF tickets and perhaps a forgotten gelato spoon from the time or two I couldn’t find a trash can.

I took back my purse but was told to wait, sharply aware of how soon I had to board. I avoided eye contact for an eternity, or possibly six minutes, as the same agent cupped his hands around my junior-year beer boobs. His fingers stroked and probed me slowly, intently, and then he’d squeeze, release, repeat. He massaged over my nipples in case it wasn’t just my covered cleavage hiding contraband. Periodically, he’d flip page by page through the book I’d packed—The Picture of Dorian Gray, which I never finished—as if to provide it the same courtesy. I muffle-cried on the first plane, convinced myself it was normal on the next, and had all but forgotten by the time I reunited with my beaming parents. My friends and I had all experienced far worse stateside, in dorms, or on dance floors, and the magic of Florence was the only story worth sharing this time.

I returned to Florence a little more than three years before my home country implicitly gave “grabbing license” to body trespassers around the globe. “We the people” voted for the first woman president and were rewarded with a Brock Turner type in bronzer.

These three pre-Trump years in the Tuscan capital have been my mid-twenties—a time of “tremendous” growth and change, to borrow one of his choice adjectives. By now, my feet are firmly planted in Florence, even as my guilt about dodging the discord on my home turf continues to grow. But in light of all we’ve seen and learned since he won the nomination, staying in the Renaissance city feels symbolically significant.

Tweets and temporary products of the post-truth era hold laughable weight in a historic hotbed of humanism, a city that has long championed revolutionary ideas, science and human creativity, not “alternative facts” and authoritarian control of writers, thinkers and entertainers. Sure, Florence has seen its Savonarolas, and Italy its Berlusconis, but I find solace in how our city’s philosophical big picture directly counters the one this administration has already begun painting for us.

The true Trump-Florence disconnect is seen—as most things are in Tuscany—through the Medici. No one would argue that this was a family of meek and measured rulers. But for all their rivalries, riches and rogue men, the Medici were, above all, patrons of the arts, with a pointed concern for future generations. Our new president plans to scrap the National Endowment for the Arts and the National Endowment for the Humanities, organizations he views as frivolous at best.

Devil’s advocates may deem this juxtaposition unfair: the Medici arts bankrolling relied on private resources, while Trump’s proposed cuts aim to free up governmental funds. But it’s a sharp divergence in values any way you slice it: Trump has always brushed off these disciplines, holding little regard for their worth long before he was faced with federal spending. Art News called both his name and physical presence “an unfamiliar sight in {New York’s} major cultural institutions”.

Unsurprising, perhaps, for a man who has also made much of how little time he has to read—he’s busy “doing a lot,” with no time for novel-reading and navel-gazing on the agenda, no bookshelves in his office nor presidential biographies under his belt. The Medici, meanwhile, built monuments to illustrate the seriousness of their intellectual pursuits. Their Biblioteca Laurenziana and its myriad manuscripts—a collection of 10,000 codices that Cosimo and company amassed steadily through the years—were a purpose-driven demonstration of their place in society. 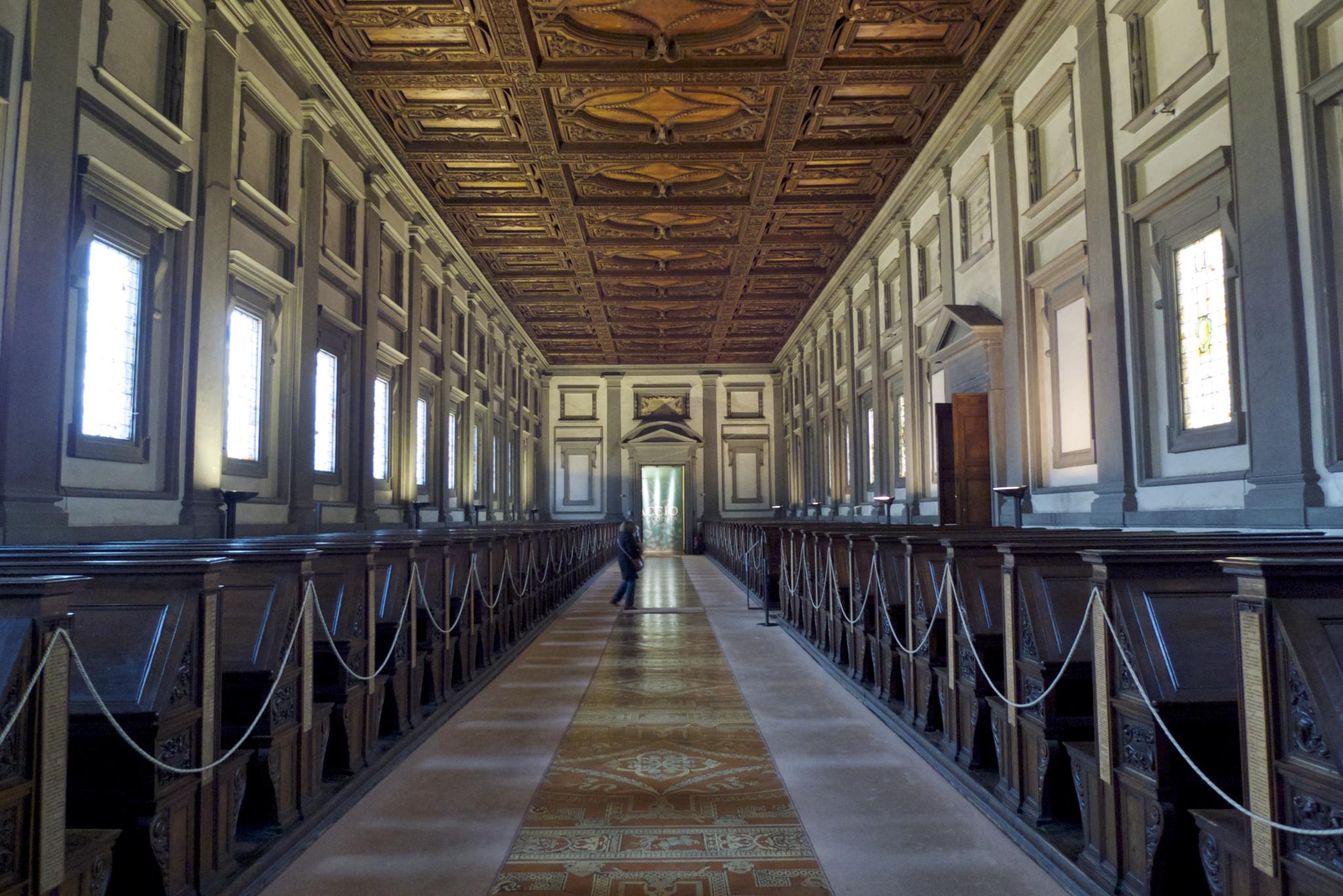 Reading room of the Biblioteca Laurenziana | Ph. via brad-darren, Flickr

Contrived as it may have been, the library’s construction sent a clear message. Medici power, the public was to understand, had been earned—substantiated by careful study of a world outside their own. Centuries later, on an orange planet of ahistorical inaugural addresses and ill-informed insults toward civil rights icons, immersion in the ideas of others would go on to be considered a sign of weakness, inadequacy.

Propped against Trump’s more alarming characteristics, his indifference toward the arts and general literary lethargy are not all that problematic. But combined with his glaring lack of empathy, they are telling. Seeing beyond one’s immediate surroundings, pondering the creative process of another, requires regard for others as thinking, feeling beings. A few moments with a Botticelli painting or a Petrarchan sonnet might behoove him, just as they might that grabby airport guard.

Curiously, when The Times of London asked Trump to name a few of his heroes, he spoke of how the skill he most admires in others—negotiation—is a “natural trait”. Aside from a passing mention of his father, who he did not call a “hero” but cited as someone he respects, there was no talk of movers and shakers nor course-changing mentors, none of the well-rehearsed anecdotes that typically pepper political interviews.

Such arrogant aversion to mentorship and reliance on “natural traits” could never have given rise to the Renaissance. Skills, talents, mold-breakers, the Medici knew, are to be developed, cultivated, fostered for the benefit of the collective. They secured commissions for struggling artists and brought the western world its household names. They established arts academies and institutions, and made, as Eric Weiner put it, “discerning investment in the common good”. Those blessed with the Trump-termed “natural traits” were actually supplied the equipment needed to nurture and share them.

It is a legacy that permeates contemporary Florence and Italy—witness the “cultural bonus” introduced last year, entitling 18-year-old Italians to 500 euro to use for activities such as visiting museums, buying books and taking art lessons. The junior minister spearheading the scheme called it “a reminder of how vital culture is for personal enrichment and for strengthening the country’s social fabric.”

Anna Maria Luisa de’ Medici, more than anyone, knew something about strengthening the Florentine fabric. The family’s final heir, she worried the incoming Lorraine dynasty would wipe out all the Medici had worked for. She “grabbed back”, so to speak, by signing the Family Pact of 1737, granting the state the Medici art collections on one condition: that they remain in Florence. Her keen foresight rings through in her words: the collections would stay “for the ornament of the State, the utility of the public and to attract the curiosity of foreigners”. It’s a far cry from a man who has crafted an entire image on the promise of building walls, enacting bans and transmitting a “Keep Out” message to the masses. This culture-poor president is a more frightening version of those travelers I meet in Florence who crudely ask me if I feel safe here with “all the immigrants”. They do not pause to consider that they are, in fact, speaking to one.

Florence’s history, like all histories, is imperfect and imbalanced. My knowledge of it is incomplete. Trump has his wall and golden thrones; the Grand Dukes their Vasari Corridor and gilded palace. But the cultural tradition of our city has always tended toward inclusion. For now, I stay. I stay because I love Florence, but I also stay because I have no doubt that Florence loves me—us—“surely, in a better way than he does”.