Trumping history with the Borgias

There are moments when, rather than feeling like a straight line, history starts to resemble a circle. Author Sarah Dunant compares past with present.

There are moments when, rather than feeling like a straight line, history starts to resemble a circle.

In 1492, having been viewed as an outsider for the biggest job in the Catholic Church, Rodrigo Borgia barnstormed his way through a sweaty conclave, using threats and bribery to neutralise his rivals and win the papal crown. When the final vote was held, we are told that he jumped to his feet and punched the air with the words, “Yes, I am Pope”.

A corpulent, energetic man in his sixties, he was already famous for his great wealth, his ruthless financial dealings—he was the Church’s vice chancellor for many years—and his inveterate womanising. Though his position as a cardinal demanded celibacy, for him (as for many high clerics) that did not mean chastity. He had seven children in all, four of them by a recent long-term mistress whom he discarded after some years for a much, much younger model.

Right from the start, the Borgia papacy specialised in family self-aggrandisement. He staged a huge showy inauguration playing to the Roman crowds. Top positions went to family and friends. He built his own apartments in the Vatican, having them extravagantly decorated by the most fashionable painter of the day and when his daughter got married, he threw a lavish wedding inside those same rooms.

His eldest son Cesare was his closest advisor, finally moving into the Vatican and using papal funds to run a military campaign to annex the Papal States into the Borgia dynasty. Rodrigo himself was by all accounts so fond of his daughter Lucrezia that when her first marriage was annulled in favour of a new alliance on the grounds of her husband’s impotence, the furious man (whose first wife had died in childbirth) remarked publically, “I have known my wife an infinity of times and the Pope only wants her back for himself.” One lie led to another and what started as gossip soon became accepted in history as fact.

In a world not shy of brutality and ruthlessness the Borgia still stood out. When the Spanish came to ask for a lion’s share of the new world (America starts here) the Pope got a royal bride for his son out of the deal. When one of the Roman families moved against him during a French invasion, he had the head of the family poisoned in prison and some years later annihilated half the rest. He lied and dissembled without compunction. The bodies of his enemies were found garrotted in the Tiber and when an anonymous letter damning the family’s actions was samizdated around town (Renaissance media was mainly gossip but sometimes print), Cesare Borgia caught a Venetian on the streets distributing it and cut off his hand and tongue. When Venice’s ambassador complained, the Pope replied, “Ah, he’s a nice boy but he can’t abide insults”.

Rodrigo died in 1503, felled by a mosquito bite during a viciously hot Roman summer: the gossip was that his bedchamber was full of cavorting bare-chested devils (speaking if not in Russian, then a strange tongue, come to claim him after the deal made with him to let him rule. His body was so bloated that it started to decay almost immediately and had to be buried hurriedly, men pushing and shoving into a coffin, which was already too small for it.

His papacy was to have a powerful impact on the history of Europe. His political and diplomatic dealings were followed with acute interest by a young Florentine envoy who spent months at the court of Cesare Borgia. His name was Niccolò Machiavelli and he used what he had seen and learned when he wrote his political masterpiece “The Prince”. A few years later, Martin Luther, who had visited Rome as a young monk during the 1500 Jubilee and been appalled at what he saw, nailed his 17 treatises to the church door at Wittenberg. The protestant reformation, spreading war and bloodshed across Europe, had begun. History, then as now, has consequences.

From the author of The Birth of Venus and Blood and Beauty, Sarah Dunant’s new book, In the Name of the Family, breathes new life into the daring and corruption of the Borgia family and the wily observation of Niccolò Machiavelli. Out on March 2, 2017 (London: Virago).

Preorder your US edition here. 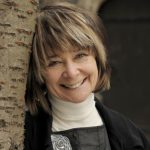 Sarah Dunant is a cultural commentator, award-winning thriller writer and author of a trilogy of novels set in Renaissance Italy exploring women's lives through art, sex and religion. www.sarahdunant.co.uk