This is an excerpt from Katja Meier’s just published book Across the Big Blue Sea: Good Intentions and Hard Lessons in an Italian Refugee Home. Meet the author at Todo Modo bookshop (via dei Fossi 15R, Florence) on April 4 at 6.30pm.

I pulled back the curtain of the photo booth in front of the train station and showed the girls which buttons to press to get the photos right.

They had left Nigeria without passports, and nobody in the group had ever possessed any kind of official document. The girls were wearing the synthetic tracksuits they had been given when arriving in Sicily. The tracksuits were green or blue, and each one had “Referee” written on the chest. We were chatting and waiting next to the booth for the pictures to develop when an elderly man stopped on his way to the station and asked what national team they were playing for.

I had noted the friendly and interested looks from several passersby.

I had not expected to receive so many of them at an Italian train station in the company of five black women.

But the immigration officer at the questura wasn’t fooled into sudden respect by an old tracksuit. “Don’t worry”, was the first thing he said, while looking Fola up and down, “we’ll find an Italian husband for you.”

“What did he say?” Fola asked.

“Ah, nothing”, I mumbled, fiddling with her photos and already regretting that I had agreed to translate during the interview.

The officer settled into a chair to take down the details. We had already prepared a statement which explained the reasons for her asylum request and indicated which route she had traveled to get to Italy. I had written everything down for her before she signed the statement. Fola couldn’t write and read, but a friend had taught her how to spell her name.

The interview moved slowly. Fola was asked about her date and place of birth (“Say that again!”), mother tongue (“Sure, that’s a language?”) and education and former profession (“None, of course! Why do I even bother to ask!”). A whole life had to be condensed into answers of maximum two words, since anything more overtaxed the immigration expert’s erratic computer skills. Short even by Italian standards, the officer didn’t make up for his stocky build with a quick mind or expansiveness of soul. His office was filled to the ceiling with stacks of interview printouts held together in brown paper folders—the United Nations’ bottom strata, neatly assembled in a provincial office in the Italian outback. The names were written in red on top of each dossier. The effect was equalizing and unifying—whatever the nationality and identity hidden behind the names, once they landed on this slush pile, applicants would be churned out on the other side as asylum seekers.

The phone rang, and the officer tried to pull a folder from the bottom of one of the stacks. I watched the wobbly document tower and thought of my home country, confident that Switzerland had conceived of an approach to the bureaucracy of immigration that didn’t include long and complicated foreign names written with felt-tip pens on cardboard folders.

An hour later, after feeding the national database two keys at a time, and a lot of complaining about the task, the officer handed Fola the printout of the interview. She carefully signed it by putting down letter after letter of her first name.

We were halfway out the door when the immigration officer called me back.

“You are coming from one fine country!”

“Yes, the Swiss have the right approach to this whole mess! Do you know how asylum requests are handled by your most efficient nation?”

I did not. I only ever had to deal with immigration practices when moving to Italy. But Switzerland knew its share about immigration; the majority of our highways and buildings had been built by Italians, after all.

“Switzerland doesn’t mess around. Once an asylum request is denied,” the officer pointed to Fola, who was standing in the open door, “these people are sent straight home. No rubbish like here in Italy, where immigrants can lodge one appeal after the other until they find a judge who’ll let them stay. You sort things out quickly and once you’re done—you put them on a plane, and ciao!”

He either truly admired my country or was pleased that he had managed to sink my Swiss pride. Bureaucratic sluggishness and labyrinthine paper work has driven people into despair since long before Kafka’s time, but the other side of the coin—administrative proficiency executed by overzealous law-abiding officials—could be even worse. 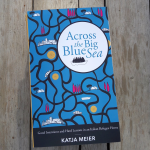 Katja Meier was born in Switzerland and has lived in Italy for nearly two decades. Trained as an actress, she worked as an olive picker, wedding planner and life coach before taking on a Tuscan refugee home. She lives with her Italian partner and their two children next to an olive grove in a little known valley in southern Tuscany.