The United States declared war on Germany on April 6, 1917, after remaining neutral in the worldwide conflict for nearly three years. Though the U.S. did not spend much time on the ground in Europe before victory was declared on November 11, 1918, American troops would later return to play a much larger role in World War II. Their presence in Italy, and in Tuscany in particular, can be understood at the Florence American Cemetery and Memorial, located 12 kilometres south of Florence. In remembrance of all the foreign military troops who fought and died in Italy during both World Wars, including many from Commonwealth countries, here is a list of cemeteries and memorials located throughout Tuscany.

The Florence American Cemetery and Memorial is one of the largest war cemeteries in Tuscany. Covering 70 acres on the outskirts of Florence, there are 4,401 military dead buried on the grounds. Most of them died in the ensuing fighting after the capture of Rome in June 1944. According to the Cemetery and Memorial’s website, those buried here make up an astonishing 39 percent of the fallen Fifth Army members originally buried between Rome and the Alps. In addition to the tombstones, visitors can also contemplate the 1,409 names inscribed on the Tablets of the Missing. Whenever a solider is recovered or identified, a bronze rosette is added to their name.

The cemetery is open to the public every day from 9am to 5pm, except Christmas and New Year’s Day. 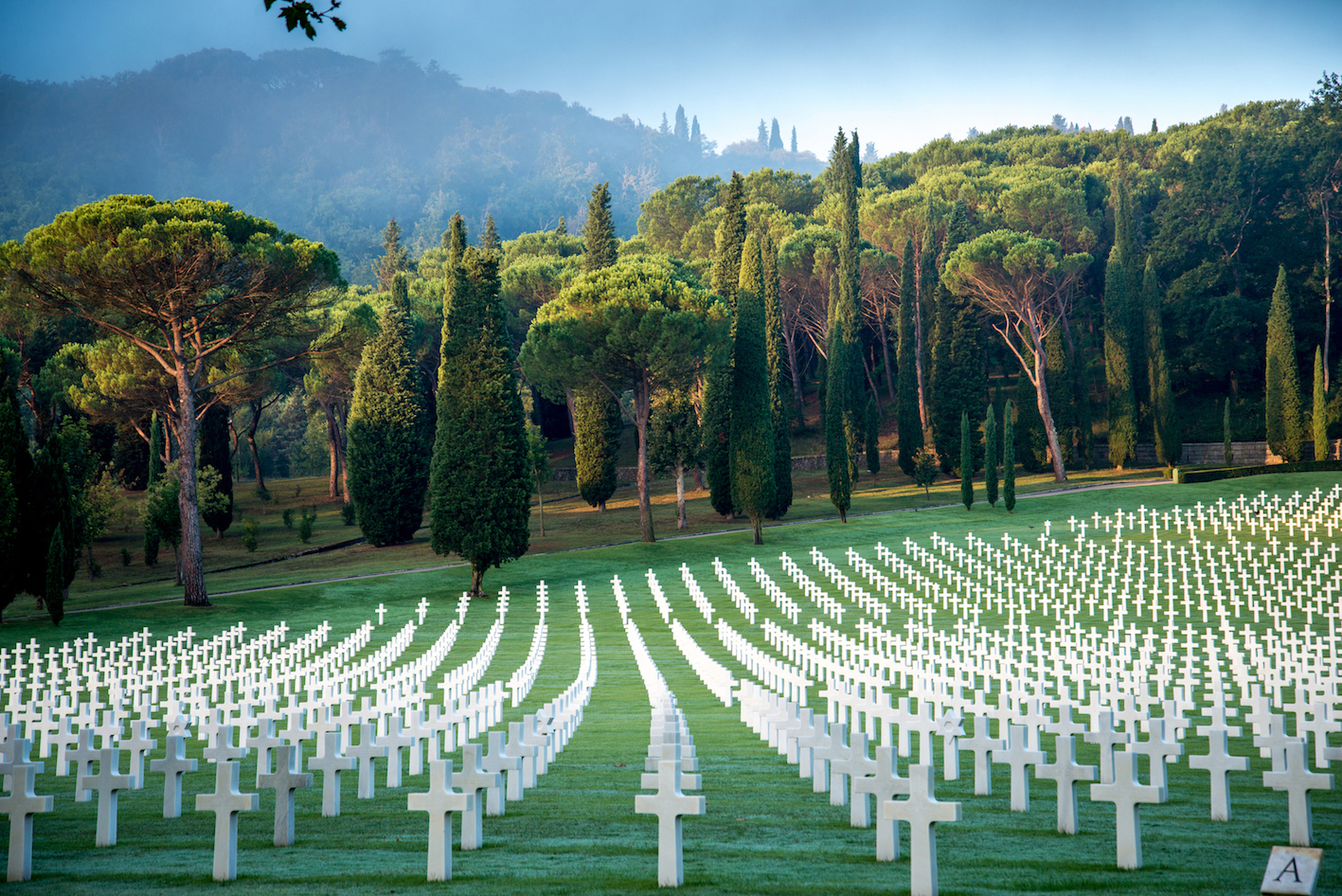 The heavy participation of Commonwealth soldiers in the Italian Campaign, beginning in the summer of 1943, resulted in the establishment of several Commonwealth cemeteries and memorials in Tuscany, where the fighting intensified in mid-1944. The Florence War Cemetery, located just outside the city, in the comune of Fiesole, was originally intended for soldiers who died in area hospitals. It quickly became the burial grounds for those who died fighting after Florence was captured in August 1944, when many of their American allies buried in the aforementioned cemetery also fell. Today, the Florence War Cemetery is home to 1,632 WWII burials.

Before reaching Florence in August, the Germans took a stand outside Arezzo in July. Though it was quickly razed down by the Allies, over 1000 soldiers died in the fighting. The Arezzo War Cemetery, also operated by the Commonwealth War Graves Commission, contains 1,229 identified casualties, most of whom are British. Interestingly, the cemetery also contains burials from the 4th and 8th Indian Divisions, who have dedicated plots, as well as 27 New Zealanders, 20 Canadians, 50 South Africans and 1 Russian. Among the interned here is Lieutenant St. John Young, whose heroic actions in the face of death at just 23 years old earned him the George Cross, the second highest award of the United Kingdom honours system.

The cemetery is open to the public and can be visited at any time.

Perhaps lesser known is the former Brazilian Military Cemetery located near Pistoia. Unlike the other fallen Allies, many of those interred here lost their lives in the latest stages of the war in northern Italy. The 463 soldiers, belonging to the Brazilian Expeditionary Force, were buried in the cemetery outside Pistoia, where they remained until 1960. The cemetery was then closed and the remains were moved to Rio de Janeiro in Brazil. In its place, the Brazilian Monument and Tomb of the Unknown Soldier of World War II was established, centered around the Unknown Soldier belonging to the unidentified body that was discovered on the site after the other remains were transferred across the Atlantic. The Brazilian Government chose to leave the body in Italy, and today, the tomb stands as symbol honouring Brazil’s role in the war and their fallen servicemen.

Located on the road between Imola and Firenzuola, the Santerno Valley War Cemetery was established by the British 78th Division during the fighting in the Apennines towards the end of 1944. As the advance up the peninsula slowed down in late 1944, a result of the order to transfer some divisions to France, where the new offensive was underway, German forces successfully overcame several key defensive points in the Allies’ line and briefly gained the upper-hand. The cemetery, overseen by the Commonwealth War Graves Commission, is the final resting place for 287 soldiers who lost their lives in these months of stalled action.

The cemetery is permanently open to the public and can be visited at any time.

As the Allies swiftly made their way up the Italian mainland in the fall of 1943, the Germans continued to put up a fight, fortifying themselves along the three defensive lines, known as the Winter Line. The primary line, the Gustav Line, eventually fell in May 1944 and the Allies continued to gain land as the Germans retreated, including taking Rome in early June. By July, the fighting had made its way into Tuscany, and like many of those buried at the Arezzo War Cemetery, most of the soldiers buried here also lost their lives in the mid-summer fighting outside the city. The Foiano Della Chiana War Cemetery was originally a battlefield cemetery, but was expanded when other graves were transferred to the site. It now contains 256 Commonwealth burials in total, including servicemen from South Africa, Canada, New Zealand, and India, in addition to the UK.

The cemetery is permanently open to the public and can be visited at any time.