March 2017 marked the first exhibit of Italian-American women artists at the Italian American Museum in New York City founded as well as directed by Dr. J. Scelsa. Not all of these artists, however, were born in the United States. Some are natives from various regions of Italy; they came to the United States early in their careers in order to forge a new life, creating art that reflects cross-pollinations by way of immigration.

Located in the historic community of Manhattan’s “Little Italy”, the Italian American Museum’s exhibit, Artiste Italiane, coincides with two important events: International Women’s Day and Women’s History Month, a yearly celebration in the United States. At the end of April, the museum will invite guests to hear poetry by the exhibiting artists, thereby connecting this exhibit to yet another important national cultural event, National Poetry Month.

The Italian American Museum was once La Banca Stabile, a bank designed to assist Italian immigrants for various services other than banking, such as employment, translation or help with travel. This small, unpretentious exhibit featuring 13 artists, known nationally and internationally, is in truth a significant historical occasion for the Italian community to gather, pause and reflect on what Italian heritage and immigration means to current-day Italian-Americans. Moreover, this show, however small in scale, is indeed a platform for the too often neglected voices of Italian-American women, their intimate connections with their current environment and their multifaceted Italian cultural and artistic heritage. Some of these artists are long-standing members of the National Organization of Italian American Women, founded in 1980 by Aileen R. Sirey and Geraldine Ferraro. The artists who are members of NOIAW are Barbara Gerard, B. Amore, Nancy Macina, Annamarie Trombetta and Janine Coyne.

Working in a plethora of mediums such as photography, graphic design, sculpture, collage and painting, the artists’ works offer the viewer a rich visual experience of artistic confluences. Janine Coyne, of Sicilian heritage, is a curator at the Italian American Museum along with artist Antonio Petracca. A photographer and photojournalist, Coyne’s photograph Sassi di Matera, taken from a high vantage point and aided by a natural diminishment of sunlight created by an azure sky strewn with enormous billowing white clouds, provides the onlooker with an aerial view of rooftops and prehistoric stone dwellings. Once abandoned in the Fifties and now revived through UNESCO and tourism, Coyne’s snapshot of these ancient abodes becomes an ode to renewal and preservation of the fragile yet imperious past.

Native New Yorker Annamaria Trombetta, in a unique canvas, The Patterns Within Create The Overall Shape of Our Lives, shaped in a triangle with its apex pointing downward, a metaphor of the woman’s womb, recreates in minute detail a specific location in New York City’s historical landmark, Central Park. In her work, Trombetta depicts within this V-shaped canvas a bridge, beneath which an underpass where a narrow cement pathway draws the viewer to focus, to search for what lies beyond. With her canvas, along with this underpass, the artist creates, within the viewer, the feeling of passing through a mental portal as if in a daydream. Crowning the expertly rendered nineteenth-century stone bridge are verdant treetops. Currently a strictly plein air painter and equally adept at figurative painting and still lifes, Trombetta is influenced by the nature scenes of the Hudson River School painters and the French Impressionists . She is, however, more drawn to her Italian artistic heritage, the Macchiaioli painters of the Risorgimento period. Trombetta transforms their large swooping swatches of color, the macchia, into remarkable chromatically controlled feminine views of nature. 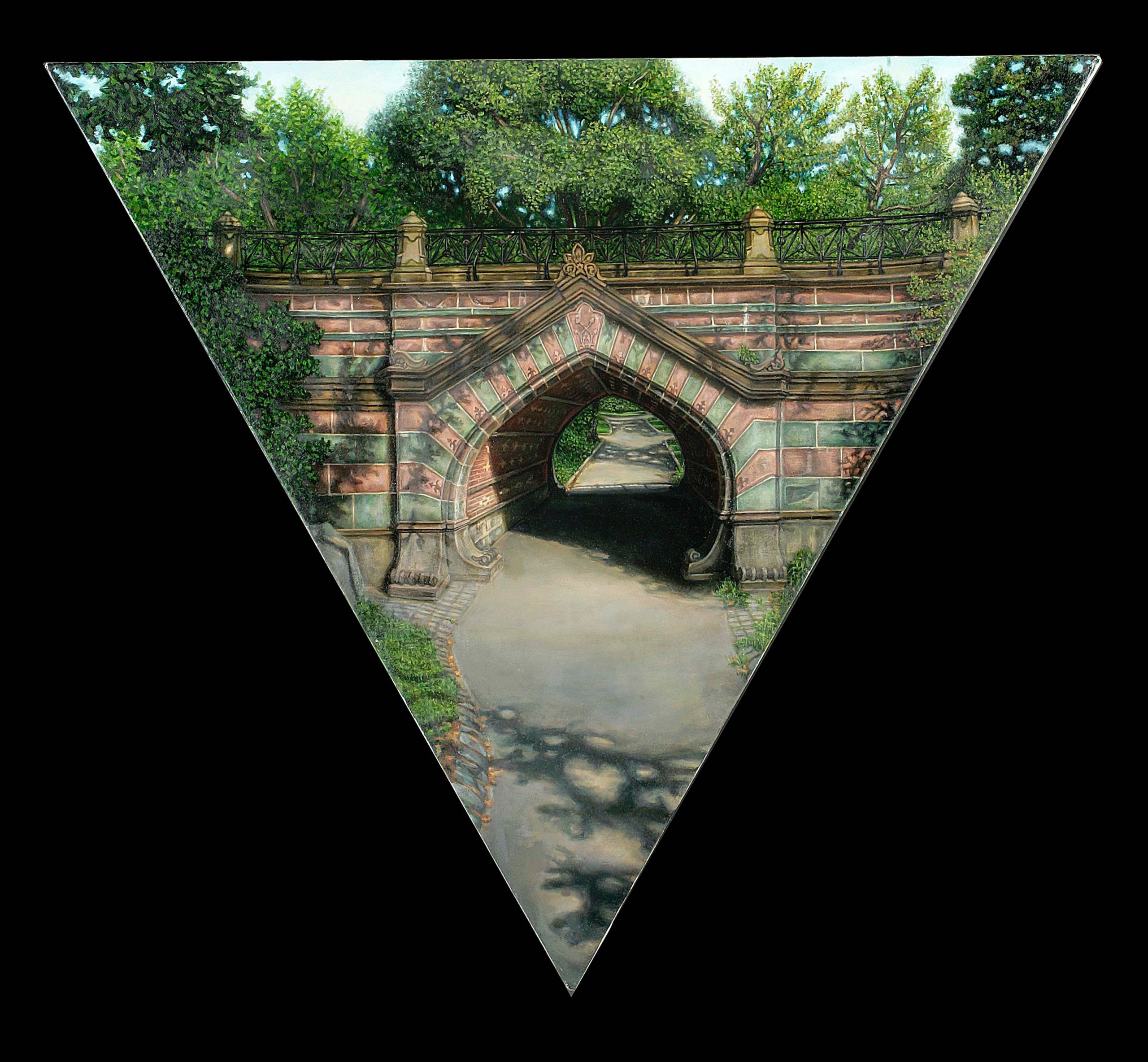 Annamarie Trombetta, “The Patterns Within Create The Overall Shape Of Our Life”

Her work also underscores influences that are not directly apparent to us. In an interview for this article, Trombetta stated that her V-shaped canvas was inspired by the American architect Buckminster Fuller’s Geodesic Domes, which have been used as civic buildings, exhibition attractions and parts of military stations. Fuller was the grandnephew of another of Trombetta’s inspirational figures, Margaret Fuller, the premier U.S. woman’s activist, whose connection and admiration for Giuseppe Mazzini’s efforts during Italy’s unification trigger this artist’s imagination and deep connection to her heritage’s political past, as well as her commitment to gender issues in art. Trombetta’s work has been exhibited in museums and galleries both nationally and internationally and her work has appeared in numerous magazines. Trombetta will be teaching plein air painting at Villa Nobile in Tuscany in summer 2017.

Louise Fili, an American-born graphic designer and owner of her own design firm, showcases her artistry in this exhibit through Art Deco-inspired typography in her digital designs of book jackets for Rizzoli International’s reproduction of novels by Edmondo De Amicis (Cuore) and Federico De Roberto (Vicerè). These two authors of the later part of the Risorgimento period were concerned with class struggles during the long strife of Italy’s unification, marking the beginning of Fascism. Fili’s predilection for Art Deco typography and design is also evident in her digital display of her 19 Thirties-inspired Italian pencil boxes, Perfetto Pencils.

Michela Martello was born in Grosseto and has been working for many years in the U.S. as a children’s book illustrator. With a current major solo show at the Pen & Brush gallery in NYC, Martello’s DNA Island is a mixed media work on cotton canvas depicting a mandala-like circle. Colored in certain areas in bright pink and with letters also in bright pink forming the word Manhattan, the pink Tibetan-inspired mandala becomes a whimsical, child-like wheel of fortune. Around the wheel are small fairytale figures dressed in various forms of bright-colored folk dress.

B. Amore’s Worker’s Mandala is a large wall relief comprises a large drawing, a map of the United States. Upon it are little red dots indicating where some Mexican migrant workers worked across the United States before arriving at their final destination: the dairy farms of Vermont, which is the state where Amore now lives. Around the map, Amore glues workers’ gloves and in between them she places fake red roses. At the bottom left is a small crucifix with depictions of the Virgin Mary and several saints. Amore’s work is especially poignant in this current anti-immigration political culture, while she describes her work as representing the “ties that bind us.

Similar in style to Cocchiarelli’s inkjet series, Italian-born Assunta Sera, in her oil painting, A Vaulted Glass, creates an abstracted vision of architectural structures alluding to a mystical cosmic vision through an aerial perspective in muted gray and green. Her color treatment of these abstracted structures are almost Morandi-like in quality.

Martina Secondo Rosso, a native of Genoa, Italy, and owner of MF gallery finds her inspiration through Italian film and pin-up shots of glamorous Italian movie stars of the Fifties and Seventies. In her painting, Gina Lollobrigida A Fiascherino, the depiction of Lollobrigida is foreshortened at the right corner of the painting, creating the illusion that the actress’s beauty is larger than life. Lollobrigida reigns over the beautiful seascape of Fiascherino, where Russo spent her childhood days playing and creating necklaces from seashells. 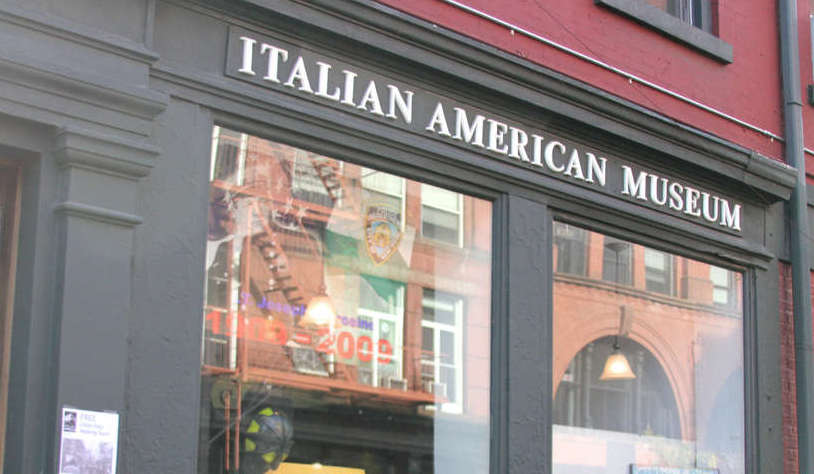 Another artist who pays homage to women’s physical beauty is Daniela Day, the manager of the Italian American Museum. Her Goddesses of Good Housekeeping is a collage inspired by 1950s advertisements of the Better Houses and Gardens magazine glorifying the perfect and happy American homemaker. At the center of the collage is a reclining woman represented as the Empress of the tarot cards. Radiating from the top of her head are rays of tape measure pointing to other depictions of woman’s work: sewing and home economics. Day places, at the bottom of her work, numbered cards from a vintage tombola owned by her Italian grandparents, honoring the memory of her relations and the game exported from Italy to the United States.

Artiste Italiane is a thought-provoking show exemplifying how these artists use their Italian cultural roots and gender to shape and transform their art and heritage into an enduring legacy. 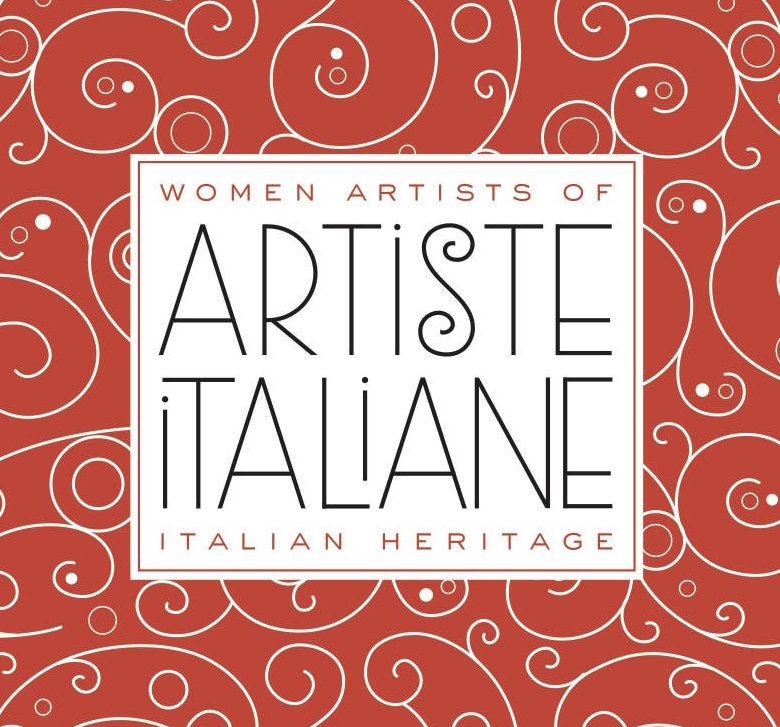 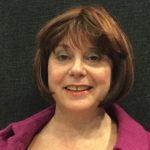 Cristina La Porta holds a Ph.D. in Comparative Literature from Columbia University. A former college professor of French and Italian Studies, she is currently a freelance art writer, editor, translator and lecturer. Her articles can be found in Fine Arts Connoisseur, American Arts Quarterly and VIA (Voices of Italian Americana, online magazine). She was a recipient of a PSC/CUNY grant for her interdisciplinary work on Antonin Artaud and Maria Izquierdo. A travelling grant from the American Academy in Rome resulted in an article, The Macchiaioli: Personal Topographies and Nationalism, published in La Rivista di Studi Italiani.