A boiler’s life: a memoir

My real name is Anne-Marie Petty-FitzMaurice Bouvier, but everybody calls me La Caldaia.

While it is la verità that I am an inanimate object, even a boiler has memories worthy of a memoir.

Were I to possess a passport, North Yorkshire would be stated as my place of birth, although my home country was substituted for Florence, Italy at the earliest opportunity. It was 1995 when I was installed in the Renaissance capital, since which date I have resided in amiable quarters near the Duomo. Countless lives have enjoyed my comforts over the course of a 21-year career: young ladies, families and students. I have listened to their problems, helped them to unwind, but above all I have serviced them with the warmest of waters. La Caldaia is my official title because “unpaid therapist” has not yet been regarded as a proper profession.

It was 1996 when a delightful family moved into my abode. Riccardo was a devoted father and a perfect husband, while Anna Maria was a wonderful mother—it is no coincidence that she and I share the same name. Vittorio was the elder brother—he used to flex his arms prior to showering, desperately seeking muscles. Beautiful, long, blonde-haired Paola was Vittorio’s sister. She was the smart one of the family, though she used to sit weeping excessively for her boyfriend Lapo on the bathroom floor. Love hurts, tesoro. It’s why I decided to stay “fabulously single” like that Carrie Bradshaw character. Those were the days when I would practise my Italian, and even picked up some toscano, in order to fare due chiacchiere with my colleague, Signor Indesit the Dishwasher. 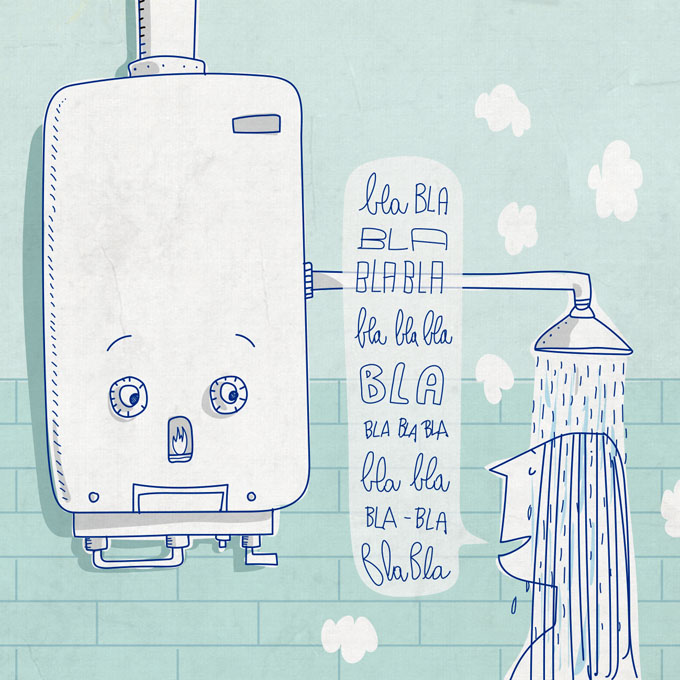 In 2007, life took a spin thanks to Eva. I will never forget when she would come home at 6am after a night out in San Frediano and take a shower—sometimes even two!—before dashing off to school, the famous Accademia di Belle Arti. She never slept much, but that’s because Eva was an artist, a creative type. She would wash her brushes lovingly in warm water and soap as if they were her babies.

In 2009, Caterina arrived in my cubicle, a tormented soul searching for her place in the world. Not a Florentine, she had moved to the city looking for the hottest of love stories. Her heart was broken, and from time to time Caterina would confide in me about changing her life for good. I will always be grateful to her because my tubes needed check-ups and she was willing to help this old lady.

Which brings us to Andrea. He moved in two years ago and is a hurricane, in a good way. Andrea came to Florence to study but has decided to stay “at least for now”. He speaks English and I enjoy his pop music concerts, live from the shower. Through his eyes, I glimpse the spirit of Florence: a place where people come to discover themselves, where they fall in love with the culture and the people, the art and the food.

Now it is time for me to depart. I have overheard that a new boiler is imminent since my tubes are not what they once were. Retirement is nigh, but I am neither sad nor bitter. Yes, I may never have visited Santa Croce or San Lorenzo, yet I have touched the centuries-old dust on the living flesh of my coinquilini.

My real name is Anne-Marie Petty-FitzMaurice Bouvier, but everybody calls me La Caldaia.